Buying Joes isn’t just about picking up a lot of individual figures, it’s about vehicles and playsets too. While some of my fondest memories of playing with Joes are vehicle-based, I’d been avoiding buying any ROC vehicles. There are a couple of reasons for this. One, my adult sensibilities kick in and remind me that space is at a commodity. And two, almost all of my Joe purchases are guided by a bit of nostalgia. One or the other of those has kept me from making vehicle purchases so far. The ROC Night Raven, though awesome, has nowhere to go right now. The Ice Dagger, though awesome, is no Snow Cat. Finally, though, one of the vehicles was able to convince me to overlook space and nostalgia concerns: the Crimson Hydra.

I know I was just talking about nostalgia and any well-versed Joe collector can tell you there is no plane similar to the Crimson Hydra in the classic toy line. Well, I wasn’t into only Joes as a kid. I loved planes too. I still do. The Crimson Hydra is essentially a “toyified” version of the F-117A Nighthawk. When I was a kid, there was a lot of speculation about the “secret” F-19 fighter jet. Though the military either never really had one or has successfully covered up having one, a couple designs were made up by model kit companies and a star was born. Even Hasbro got in on the action with the Phantom X-19 Stealth Fighter. A few years later, the secret military F-19 turned out to really be the F-117A, the jet the Crimson Hydra is based on. In my addled mind, all of that blended together and I found myself short $25 and plus one crimson stealth fighter pretty quickly.

The first thing you notice about the Hydra when you get it out of the box, is its size. The plane is about 12.5″ long, 11″ wide, and 4.5″ tall. It’s not in any real scale to the figures of course, it’d have to be about twice as tall and four times as long I’d guess, but it’s still a nice-sized Joe vehicle for $25. The plane features an opening canopy, two retractable wings, the top of the plane opens to reveal some inner workings and two firing missiles, a snap-on missile, and retractable landing gear with free rolling wheels. The plane also features a detachable spy plane that holds another figure in addition to the included Aero-Viper. 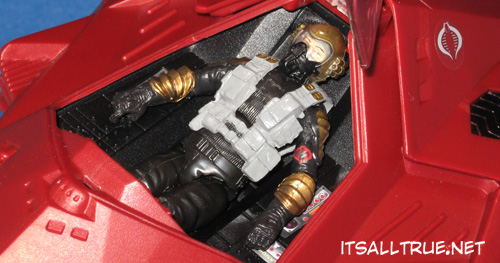 The Aero-Viper is an okay figure. He features standard articulation and is painted well, but one thing about him bothers me. He’s built around the same base body as the other ROC vipers, but features a different head, helmet, and webgear. I think the metallic gold is a nice touch as it really bring outs the boots, pads, and helmet. My only complaint about the figure is that I would’ve liked to see the armor be more in line with the other vipers. I love the Crimson Neo-Viper. When I look at the Aero-Viper I want to see him done similarly. I’m happy with the choice of helmet, but I’d quickly trade out the webgear for some gold Neo-Viper armor . As it is now, the Aero-Viper has become the pilot of the smaller spy plane and a Crimson Neo-Viper handles the bigger aircraft for that very reason. 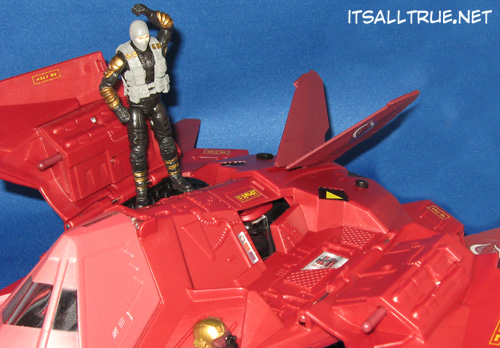 One of the main features is the opening canopy doors that reveal the insides of the plane. In theory, these can open in mid-flight and allow the plane to shoot the two included missiles, but I’m going to pretend their hatches to let people work on the plane or to make sure the poor spy plane pilot is still breathing. The opening doors and firing missiles may be a nice touch for kid’s play value, but it exposes a lot of unpainted areas and really takes away from the overall piece (more on that later). Finally, the landing gear is tight, almost too tight, and stays in place firmly in both up and down positions.

The best part of this $25 vehicle is its second vehicle! The smaller spy-pod is about 5.5″ long and snugly fits one figure. It features an opening canopy and two retractable wings. It pops in and out of the larger vehicle easily and stays in place when not in use. There’s not too much to say about it, but it’s fun to have and increases the value of the set. Continue to Page 2….