While we’re waiting on the fate of the subscription, I thought it’d be interesting to take a look at the upcoming case assortments for DC Universe Classics Wave 20. Mattel mentioned that the new DC line would offer them some flexibility and DCUC20 might just be a window into their intentions.

We don’t talk a lot about case assortments here at IAT. The information isn’t contained in our checklists and we don’t really mention it in the reviews either. That’s largely because it hasn’t really been very important to the line. There are (usually) clear gaps in time between the waves and with the exception of a flirtation with “Best of” cases here and there, Mattel doesn’t tend to mix things up too much. At least not yet, Wave 20 is shaping up to be a little different from what we’re used to.

Before I jump into that Wave 20 model, I wanted to do a quick rundown of how the case assortments have been handled over the last couple years. I think it will help if we all know where we’ve been. In 2008, cases for DCUC Waves 1-6 each contained all the figures in the wave (with the exception of the variants which were substituted in specific ratios). There were multiple case assortments, but the only changes involved switching which figure was doubled up. To the right is a graphic showing the two case assortments for Wave 6.

The first two columns contain the assortment as it originally shipped and the first revision case. As you can see, you could build Kalibak with one successful visit to your favorite retailer. The third column is something I’m currently calling “CoE”. It stands for “Case of Each”, it’s a theoretical number that shows how many of each character a store would receive if they had one case of each assortment. Since each figure brings its own level of demand and because there’s no equality in case assortments (one case could be way overproduced while another is underproduced) it’s not always a reliable indicator for pegwarmers or rarity, but, as you’ll see, there is still some correlation between a figure’s CoE score and how difficult they were to find. 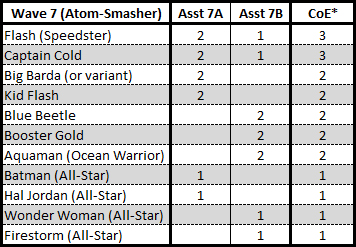 The second year, Mattel added All-Star figures to the cases and split the new figures up across two assortments. To the left is a chart for Wave 7, which was most notable for giving us the eternal pegwarmer, Captain Cold. As you can see, both Flash & Captain Cold have a CoE of 3 making them the most plentiful figures from this wave. Flash is an A-list character and sold through with no difficulty, but Captain Cold (obviously) didn’t fare as well. In addition to him being a “3” in Wave 7 caes, Captain Cold was included in “Best of Wave One” which raised his “CoE” number to four in the first half of 2009. With that in mind, it’s little wonder he was a nationwide pegwarmer.

While Wave Seven’s split cases ended up giving DC pegs a cold chill well into 2010, Wave 8 didn’t do collectors any favors either. The chart below shows the breakdowns for Wave 8. I dropped the All-Stars to make it easier to read and added the Wave 8 figures that were included in “Best of Wave 3” and “Best of Wave 4”. Looking at those CoE numbers, you might guess some folks had trouble finding Gentlemen Ghost…

Now, at this point you might be asking how does Captain Cold being a “4” makes him a pegwarmer while Gentlemen Ghost being a “2” makes him rare. The first thing to keep in mind is that the CoE number is difficult to use when comparing two separate waves. Cold was a pegwarmer because he ended up being a 3 when most of the figures from his wave were 2s. Similarly, Gentlemen Ghost was a 2 in a wave of 3s and 4s. The impact of the CoE score is also better illustrated with larger numbers – let’s say that each of the case assortments that contained Wave 8 figures was produced 10,000 times. For Wave 8, that would mean there were 40,000 Parademons and 40,000 Dr. Fates, but only 20,000 Gentlemen Ghosts. The CoE numbers may be small, but they have a large impact. And, as I mentioned above, a low CoE score can be overcome by other factors. Demand could be similarly low (when a low CoE would make sense) or the case containing the low CoE figure could be ordered in greater quantities than the other cases, balancing things out. Though, if Wave 8A had been produced in higher quantities Gentlemen Ghost’s wider availability would’ve also resulted in a veritable glut of Parademons and Dr. Fates.

Anyway, the split case model continued through the rest of 2009 and 2010 (with the exception of the two solid case Wal-Mart waves), but things changed again in 2011. This year saw the return of solid cases and the number of figures per case drop to eight. Wave 16 still shipped in two assortments, but only the All-Stars changed and either case could complete Bane. Wave 18 had no All-Stars, instead opting to double up on different figures in each assortment. I haven’t seen a second case listing for Wave 19 yet, but I’m guessing it will ship similarly.

So what does our experience with DCUC case assortments the last few years teach us? That while a case containing all the figures is better for collectors than not, split cases are still manageable as long as the figures are produced in a balanced fashion across the assortment. That there shouldn’t be too much variance in the CoE. This brings us to Wave 20.

According to BBTS, Wave 20 is currently scheduled to ship with four separate assortments. There are seven figures in the wave with an All-Star Hal (release no. 12, joy) rounding out the eight-figure cases. If the current plan goes unchanged, three of the four assortments will double up on a particular franchise (GL, Flash, GA) while the fourth case will be packed one each and be the only one that can complete Nekron.

A quick glance at the chart above shows that the case assortments for Wave 20 aren’t very well balanced. If a retailer orders heavy, the Flash and GL figures could add up quickly and unless some retailers order big on Assortments B or C, Hawk & Dove could become shortpacked rather easily. Frankly, this particular breakdown makes me scratch my head a bit. I’m almost hoping there’s a fifth case scheduled somewhere that doubles up on Hawk & Dove and gets their CoEs back in line or that Mattel is somehow correct in their assessment that Hawk & Dove will be outsold by White Lantern Flash 2.5-to-1. Flash is an A-list character, but that seems like a real gamble, doesn’t it?

So what does the future hold? Will the rebranded line see case assortments similar to the ones for Wave 20? Honestly, I hope so. I know that we have a lot of reasons for concern – this strange breakdown we have for Wave 20, the half-Superman cases from the DC Superheroes days, or Mattel’s complete inability to fix the Gentlemen Ghost situation (though later comments have made it sound like he got stuck between Joker keeping his mold warm and contractual issues about releaseing Giganta pieces – the latter issue dissolves with the removal of C&Cs, at least).

And I guess that’s the rub. If we are going back to a model similar to DCSH or the method Hasbro uses for Marvel (and scanning some MU pegs reveals how carefully the CoE’s must be monitored, that line is prone to certain figures piling up), Mattel must be prepared to pay even closer attention to the case assortments and retailer orders than they needed to for DCUC. They’ll have to better balance the figures by measuring demand and, should a figure end up shortpacked (either due to retail orders or poor planning), they must be ready to find a place to slot him back in quickly to keep us engaged in the line without Collect & Connect pieces.

43 thoughts on “Truetorial: A Brief History
of DCUC Case Assortments”