MOTUClassics.Com: We really appreciated Prince Adam receiving unique head, but I’d like to see him with a laughing head as he was prone to a chuckle or two during his Filmation days. Are there any plans to ever revisit Adam (to fix his vest) and, if so, would a new expression head be possible?

The thought of an “LOL” Adam makes me chuckle. It is always “possible” but nothing is planned right now.

ItsAllTrue.Net Asks:Are there any plans to release the canceled Brave and the Bold Action League figures in the DC Action League line?

You will see them soon, many of them will be released under the new DCU Action League banner.

MOTUClassics.Com:Has any thought been given to how and when Kowl will make it into the Classics line? Will he be articulated? Will he be able to perch on Bow’s left shoulder?

We do have an idea of when he will be in the line (as we do for ALL vintage figures) but specifics on articulation or sculpting have not been discussed.

DCClassics.Com: Many DC Collectors believe that the DC 2pks featured on MattyCollector would’ve sold better had they been better advertised. With so much riding on the success of the Legion 12pk, does Mattel have any plans to support its release with advertisements in the retail figure packaging that would direct buyers who aren’t part of the online collecting community to MattyCollector for the Legion’s sale date?

We are always working on new ways to promote the site. Participating in four additional fan conventions this year is one way we hope to draw more eyes to MattyCollector!

DCClassics.Com: The Mattel answers often talk about adding “articulation where needed” – such as Green Arrow’s wrists. While the “rocker” ankles have been removed from most of the figures, does Mattel consider that joint needed for speedsters like Jay Garrick or Wally West? It would be difficult to pose those characters in classic running poses without that particular joint.

The “rocker” joints were removed from being a universal point of articulation as they made it difficult to keep the cost under $14.99. It is not easy to keep these figures at $14.99, and sometimes some articulation has to go. When we make these changes we try to make it in the smartest position possible. For figures where a “rocker” joint could improve a figure like a runner, we could potentially look at adding it in, on a figure by figure basis. 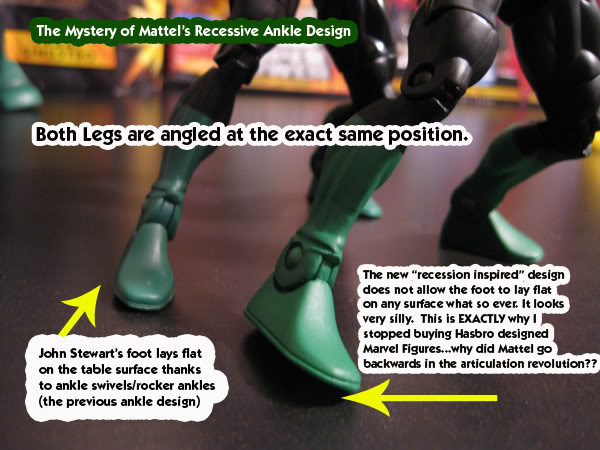 Photo courtesy of Mr. Oz via the Fwoosh. This image was used in the ActionFigureInsider letter to Mattel about design issues.