Hopefully, you’ve all taken the time to explore the wonderful MelBirnkrant.Com since the Outer Space Men returned to Earth for last year’s San Diego Comic Con. It was always a great resource for the history of the Outer Space Men, but Mel has put together a new exhibit that celebrates their return and looks to their future!

MelBirnkrant.Com first came to my attention last year shortly after the Four Horsemen announced their licensing of Mel Birnkrant’s classic toy line. It was an invaluable resource for me when I wrote IAT’s Who Are the Outer Space Men Truetorial and I’ve been happily keeping tabs on it as Mr. Birnkrant’s been adding new updates covering his time with Colorforms or his hand in creating a line I had fondly forgotten, The Trash Bag Bunch (I had a ton of those – I can’t believe I’d forgotten them), but his newest exhibit is one of my favorites. It celebrates the new line, what’s been made so far, what’s in the works, and hopefully where it can go if all those stars in the heavens align (and it’s looking like a lot of them are populated by some other space men). 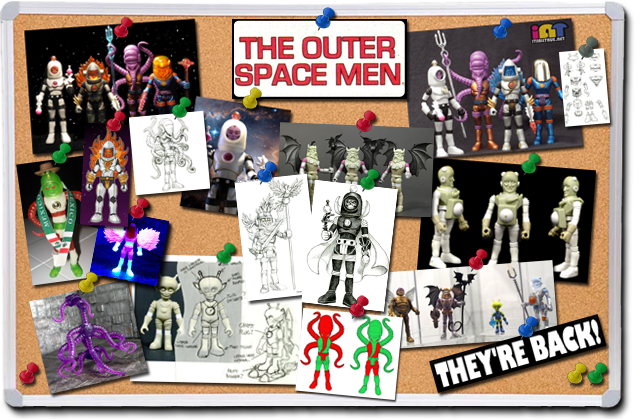 Take a close look at the pics in that bulletin board above to get a taste of what Mel has put together. The exhibit features links to reviews of the previously released figures, work in progress shots of past and future figures, tons of photos, and some sketches of possible new characters that could be worked into the line with little to no new tooling. There’s one thing for sure, it not only makes me really want to get all thirteen of the original characters, but it makes me very interested in seeing the line continue beyond them. There’s plenty of cool stuff to look at, so why are you still here? Check out MelBirnkrant.Com’s The Return Exhibit today!