One of my favorite Transformers figures from last year was the Revenge of the Fallen Lockdown. So when Hasbro announced they would be reusing that body for the Hunt for the Decepticons Axor figure, he definitely joined my buying list. The only problem was I just couldn’t seem to find him anywhere.

There’s not a lot of bio about Axor. His color scheme and history seem to be loosely based on the Generation 1 Action Master called Axer, but other than that he seems to be an entirely new bot. He apparently trained under Lockdown to become a bounty hunter, and it’s speculated that he had his appearance altered to look like his former teacher. He’s apparently a bit lazy, choosing to lure his victims to him instead of hunting them down. Also, he’s sadistic. A good time for Axor is when he gets to dismember his enemies limb by limb with his. . . axe. 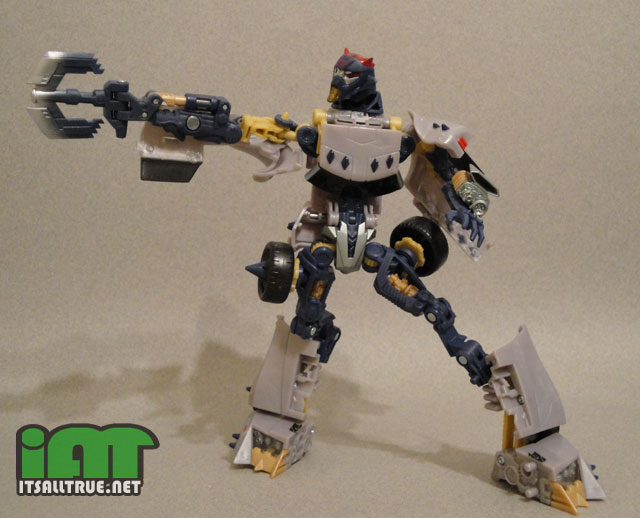 It took me forever to find this guy. There were reports of him showing up before Christmas, but all of our local stores were pretty stagnant on Transformers figures. Finally, last weekend, I stopped by Wal-Mart to pick up some essentials and Mr. Axor was just sitting there on his peg, in front of everyone. The odd thing was, there were no other figures from his wave. It was just him and a bunch of War for Cybertron Optimus and Bees. I guess The Toy Gods must have been shining on me that day. 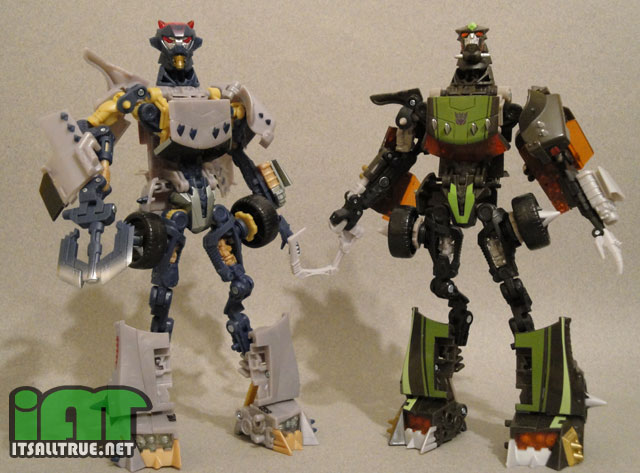 Axor’s robot mode is one of the coolest around, which is why I bought him. Like Lockdown, he’s super tall and spindly but still buff enough to be a serious threat. Axor has a new head though, which I’m glad of. I never liked it when the repaints looked exactly like the original bot. Now that Hasbro’s adding different heads into the mix, the characters at least look like they have their own personality. 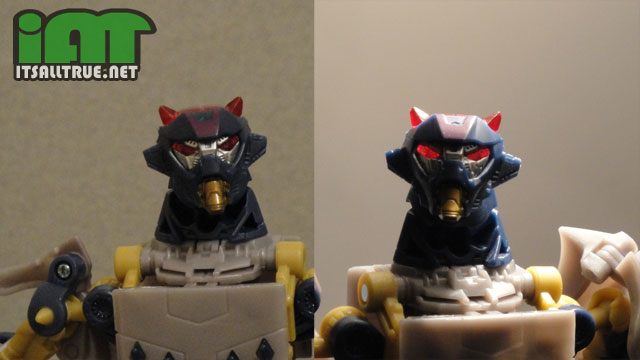 Axor’s head has some great new sculpting to it. Not only is it huge compared to Lockdown’s, but it’s just plain evil looking. My favorite Transformers reviewer, Thew, said that Lockdown looked like the Devil. I used to agree with him, until I bought Axor. Just look at those flaming red evil eyes and actual devil horns. Plus he’s got this gold goatee pulling it all together into the clichéd Devil look. All Hasbro had to do to top it off was give him a red cape and a pitchfork hand instead of an axe.

Something else I was really impressed with was Axor’s eyes. Instead of just being red slits, the sculptors actually put in these tiny gear-like semicircles. This gives him a look of pure hate and adds a lot of personality to the face. 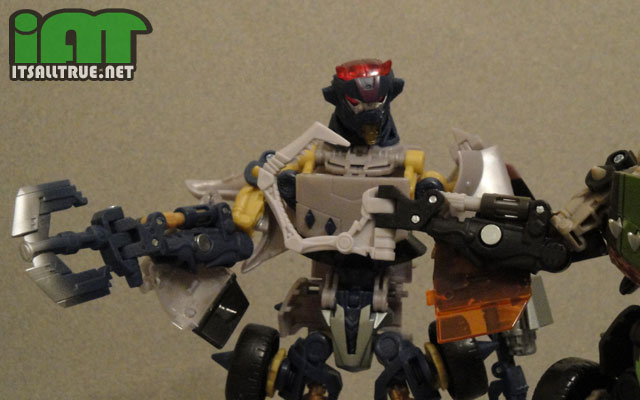 The other big difference to Axor’s sculpt is his axe hand. Where Lockdown had a giant meat hook, Axor’s axe seems a bit small. It has some nice sculpting to it, but it just doesn’t have that menacing feel. I was hoping he’d get something more akin to a giant scythe than a tiny hatchet. But I guess Hatchot isn’t as intimidating a name as Axor. Continue to Page Two….