Our Retro Reviews column is about taking a look back at some of the best, and worst, toys that we grew up with. Not just an exercise in nostalgia, but we’d like these reviews to also be a history lesson in the industry we all love. Today’s subject is still one of my favorite toys ever: Pocket Power’s Glo-Bones.

In 1988 a unique line of toys called Pocket Power entered the market. This line was manufactured by the game company SEGA, but distributed by the now defunct Tyco Toys. (Tyco was eventually bought out by Mattel.) 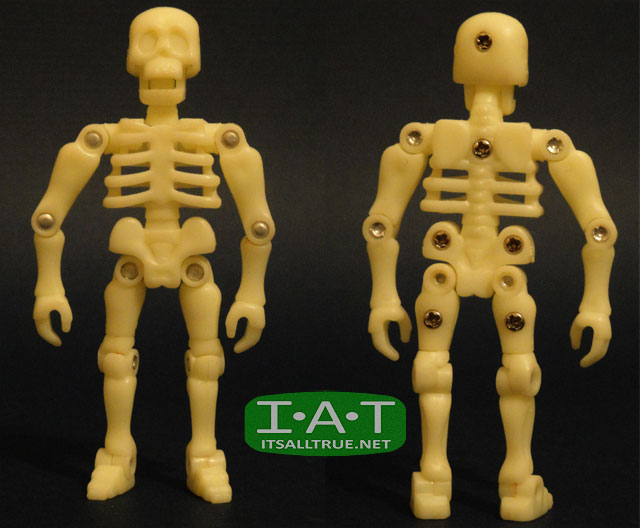 The line consisted of mostly small vehicles but also included games, miniature guns that shot projectiles or water, and even the odd but unique survival kit. All these toys were made to fit into a small black carrying case that could easily be shoved into a back pocket and taken with you for traveling fun.

I only had two of these as a kid: the Thunder Blade helicopter and Glo-Bones. I’m not really sure why my parents bought me the helicopter. As a kid, I wasn’t so much into cars and trucks as I was dinosaurs and monsters. So that poor helicopter was doomed to never be loved as much as a glow-in-the-dark skeleton with its own weapons. 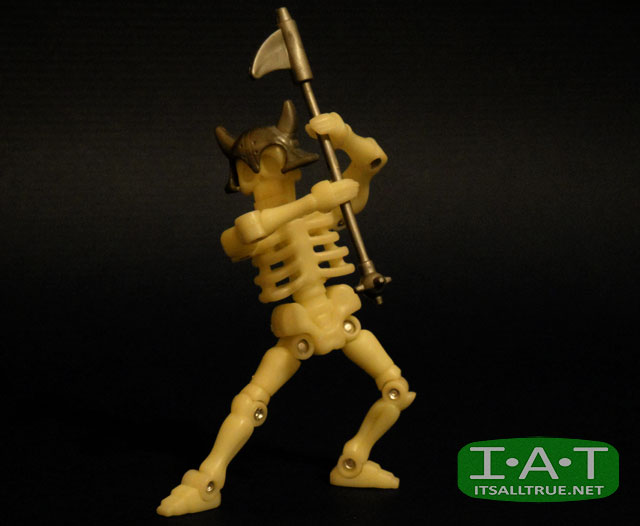 Glo-Bones sculpt is very simple, but it does have some nice details to it. The eyes and nose are recessed into the skull while the teeth are slightly raised, which adds some nice depth to a very thin figure. His torso is made of a front piece and back piece, allowing the added detail of a hollow ribcage. While his collar bone, spine, and pelvis all have sculpted details. Interestingly they sculpted his hands to have fingers but his feet have no toes, they’re just wedges. 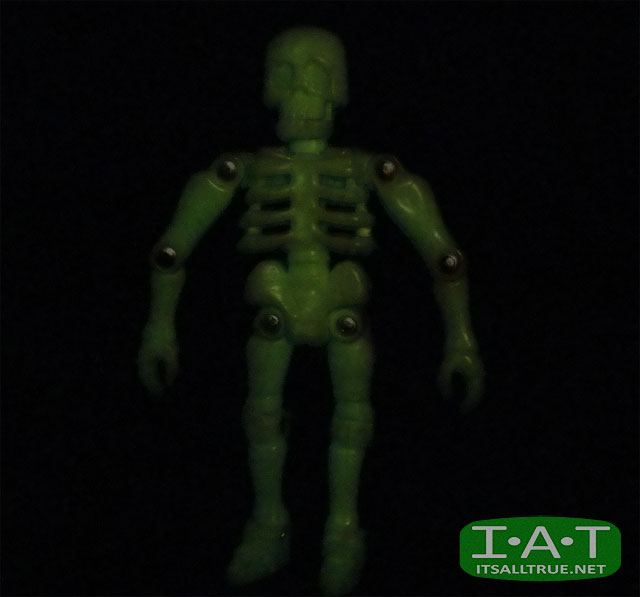 There is no paint on this guy, so all the detail comes from the sculpt. That would normally be a bad thing, but in Glo-Bones’ case it’s a positive because he’s molded entirely out of glow-in-the-dark plastic. This gives him a great off-white look under normal conditions. But when you turn out the light, he becomes a glowing revenant that haunts your shelves. I loved glow-in-the-dark as a kid, and still love it as an adult. They could make an entire line of Scareglow-like repaints for the MOTU characters and I’d be first in line to buy them. Continue to Page Two….