Number twenty-one in Revoltech’s Sci-Fi line is Toho’s 2nd giant monster, Anguirus. A loyal friend to Godzilla with a tenacious fighting style, Anguirus has become one of a beloved kaiju among fans. Plus, I’m also hoping that between his and Rodan’s inclusion in the line, Godzilla can’t be too far behind.

In 1955, Godzilla returned to the big screen in Godzilla Raids Again, but this time he wasn’t alone. Toho upped the stakes by giving him his first monster to fight, Anguirus. Based on a mutated Ankylosaurus, Anguirus fought the Big G to a near standstill until he got his throat ripped out. (It is Godzilla’s movie after all.) But Anguirus got better and he and Godzilla made amends, becoming the best of monster friends. Now he’s got Godzilla’s back in any fight, and he’s even helped save the world a couple times. 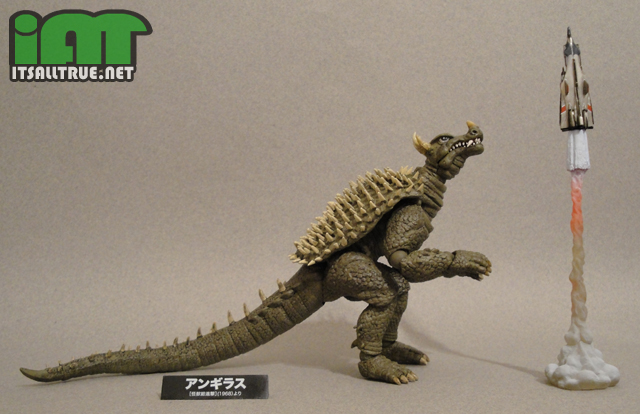 One of the things that make me love Anguirus is his characterization on the TV show Godzilla Island. Still a tough fighter and loyal friend to Godzilla, Anguirus has a more emotional personality. To offset his thick hide, the writers gave his ego thin skin. Anguirus is super sensitive and easily becomes depressed when yelled at or insulted. Giving the character an Eeyore-like complex is hilarious and makes him more than just a giant lizard of destruction. 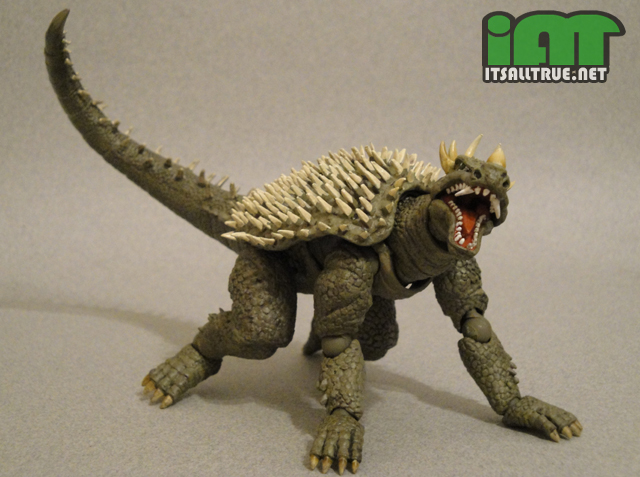 Being one of the original Toho three I was happy to get Anguirus, but I never realized how cool he would be. Sculpted by Takuma Katsuo, Anguirus is one of the larger kaiju in the line so far. His already bulky body is given even more heft by the giant spiked carapace on his back, and his huge tail is longer than his entire body. The only figure that’s more massive than him is Moguera.

I was also really happy with Anguirus’ sculpt. He’s given that realistic/man-in-suit look that I like. His underbelly is crisscrossed with skin folds while scales cover his arms, legs, and tail. His face has this perfect annoyed look to it and his mouth is so detailed they even sculpted a uvula at the back of his throat. 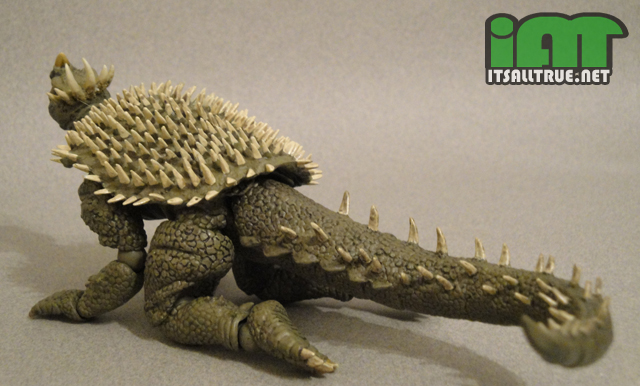 Anguirus’ body is made out of normal hard plastic, while his carapace and most of his tail are rubbery. I figured his spiky back would have to be soft so it wouldn’t impale any hands, but what surprised me is that he also has spikes on his fore arms and ankles. To fit into his box, Anguirus’ right arm and leg come detached. When you go to place them onto the figure, the little spikes become tiny torture devices for your fingers. Also, the large spike at the tip of his tail, with the three smaller ones coming off of it, is hard plastic and can easily impale your hand if you grab it by the wring place. 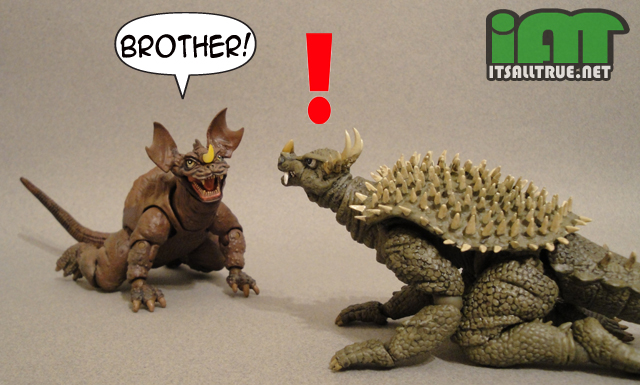 Anguirus’ paint scheme is very basic. He’s molded in a light gray while a black dry wash was used to highlight all the sculpted gaps between his scales. His spikes were given a light tan look, while his claws are darker and yellowish. His teeth are all white, while his gums and tongue look wet with a glossy red. Even his giant eyes were given a gloss to look more realistic. Continue to Page Two….