The so-called Green Lantern Classics (it doesn’t actually say that on the packaging) is the newest subline of DC Universe Classics. The first wave is chock full of modern takes on characters from the GL mythos including the three Yellow Lanterns in today’s review: Low, Maash, & the Collect ‘N Connect Arkillo.

I guess I shouldn’t call them Yellow Lanterns. They’re officially members of the Sinestro Corps, but that’s essentially the same thing. Sinestro spent years toiling away with a solitary yellow ring (& Guy played with it for awhile), but, when Geoff Johns rebirthed Hal Jordan, it kicked off the “rainbowification” of the Green Lantern mythos. While more colors would follow, the Sinestro Corps popped up first – an entire gang of individuals with the ability to “instill great fear”. 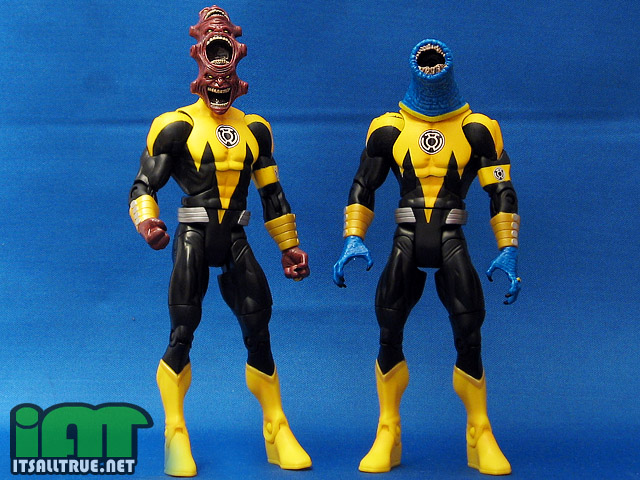 Maash (that’s him on the left) was conceived as triplets, but fused into one body before birth. The three heads have distinct personalities, but the lower two really only disagree about how best to kill you. His uppermost head isn’t really interested in killing and maiming, but he has no choice – he must bear witness to the atrocities his “brothers” commit.

Low (yep, right side this time – process of elimination, good call) is a giant parasite. He’ll suck you dry and fill your rotting carcass with eggs. And… that’s pretty much it. See, there’s a lot of Yellow Lanterns and they don’t get much screen time. This pair probably has a couple dozen appearances between them and mostly background ones at that. In a recent issue of Green Lantern Corps, Maash appeared and Kyle referred to him by name. It felt odd – almost like product placement. 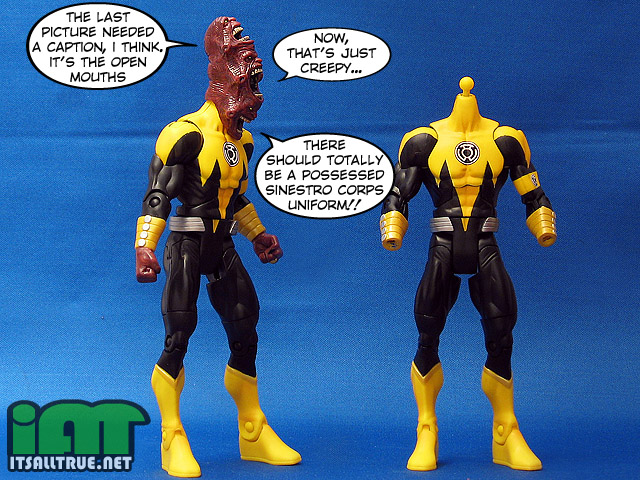 Low & Maash are Mattel’s first entry in a new way to sell similar figures – all the pieces for both figures are in one box. This is certainly nothing new, I’ve long lamented that Mattel doesn’t invest enough in alternate parts for the DC line, but this is an interesting way to go about it. Since they’re two different characters, completists are easily parlayed into buying two. Moreover, the figure is packaged both ways – as Low and as Maash – so MOC completists can similarly have both. 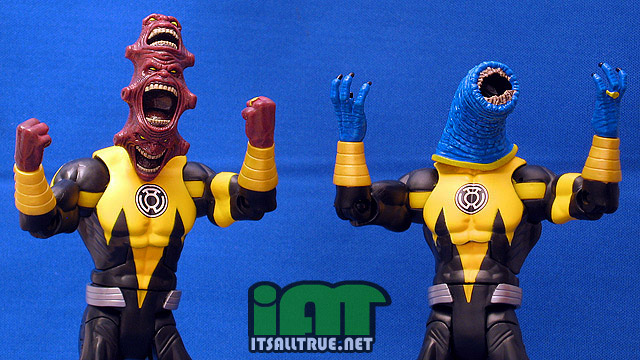 The figure is built on a basic buck with Romat Ru’s forearms & belt added to get the details right. The new sculpting is limited to the interchangeable head and hands. Low’s stuff is fine – accurate and well-sculpted for an evil worm head with claw hands, but he’s a plain character. Maash’s head is where the 4H really shine. The head had to be difficult to work into three dimensions (it’s hard for some of the artists to draw on the page), but they nailed it. Not only does it look great, but the three faces each have their own personality. The two lower heads look crazed and murderous, while the uppermost head looks appropriately anguished. I picked these up at BBTS in a full case to get both, but if I only had one (you only need one to build Arkillo) he would be Maash on my shelves all the time. 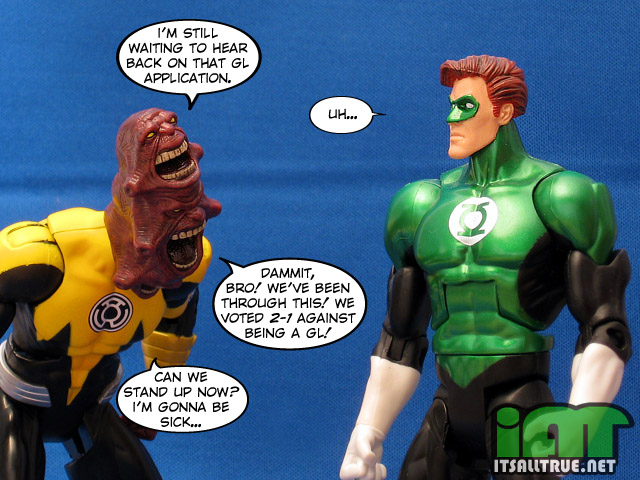 The interchangeable heads work well and pop on & off easily. They’re both softer pieces to accommodate the swapping, so that does lead to them popping off while you’re trying to pose them now and again. The hands are a different story though. They’re a little scary to swap out. The have a hard white peg that fits into the cavity on the forearm while the hand itself is made of a softer plastic. This combination leaves you pulling with a little more force than you want to when changing them. I haven’t had anything break or tear, but I don’t imagine I’ll be pulling them out of their socket too many more times. 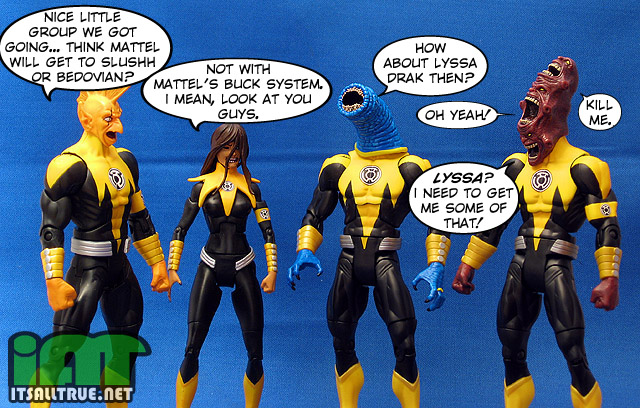 The paintwork was fine with these two. The Sinestro Corp uniforms were painted well on both and the detailing on the heads really helps the two sculpts standout. My favorite thing about Low is the blue hue for his alien parts.

Below the neck, articulation is standard and what you’ve come to expect from Mattel. There are some new joints in the wave, but not on these two figures. The Maash head has decent swivel and can tilt forward while the Low head doesn’t really want to move. It can turn, but it’s sculpted to meet the torso and wants to pop off like I mentioned above.

I did have a stuck joint on Maash’s right hip. You can see it slightly ajar in the first couple pics. I was planning to unfreeze it after the review, but it came loose while I was posing him for the pic with Hal, so… crisis averted? I was worried about it tearing like the DCUC3/DCUC4 figures, but it came free without damage. Still, always be careful with stuck joints. Continue to Arkillo…