I’m on a streak – four reviews on time. I want to go for five, but I’m not in the best place to write a toy review right now (I’ll explain that later). I needed to get away from MOTU & controversy, so I thought I’d skip to a toy line that never gets very much traction here at IAT: Transformers. If you’re reading this, I made it!

I’m not sure why Transformers doesn’t get as much attention at IAT. I think it’s because there’s not a lot of crossover between the 6” collecting world and the TF world. I love both, but as I’ve gotten back into toy collecting, I do have to admit that Transformers really wants to be a in a monogamous collecting relationship. It’s an expensive hobby, both officially and unofficially. Unofficially, you can drop an entire MOTUC subscription worth of figures to build one 14” tall bot. Officially, you can make out better with some nice $10-15 retail pieces from Hasbro – or you can really go for broke trying to collect Takara’s Masterpiece line. 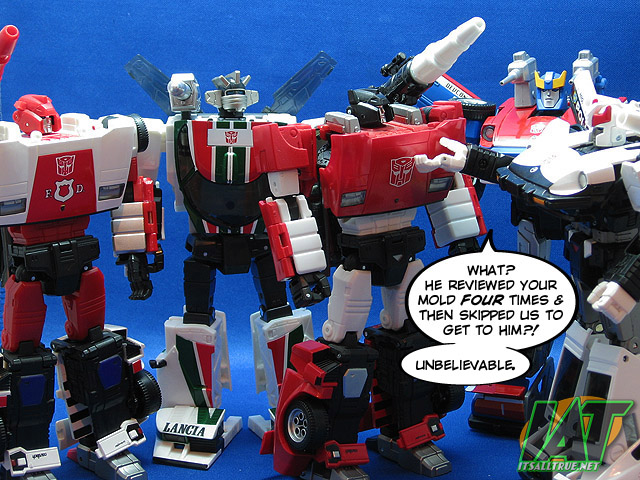 I’ve tried being patient and waiting for Hasbro to do their import thing. But it hasn’t worked out for me – I saw one MP-10 Optimus Prime. No Grimlocks. No Soundwaves. I still haven’t even seen Prowl stateside. So I opt to pay out for Takara’s work. I do so excitedly. Takara can have my money for that upcoming Ultra Magnus. I easily get drawn into silly repaints just cause they’re cool (Do I need Marlboro Wheeljack? Maybe?). And every time I’ve imported one – the Lamborghinis, the Fairladies, the Primes, the Cassette Players, and the Cassettes – I’ve been amazingly satisfied. Until now. 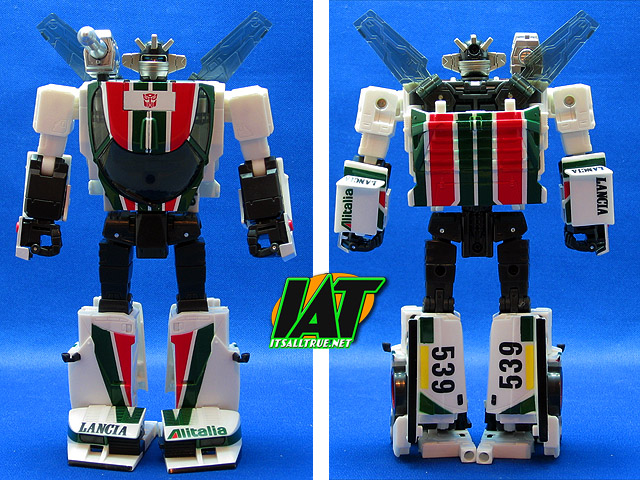 Maybe framing it like that sounds like it’s not worth the money spent. I have to point out that it’s not that. I’m terrible with money. I kinda resent needing it. And after all the bases are covered, I’m woefully wasteful with it (I’m a downright recovering spendaholic). So, no, it’s not that Wheeljack isn’t worth the $60-80 – heck, maybe none of these MP cars are, but it’s not about that with Wheeljack. It’s something else. 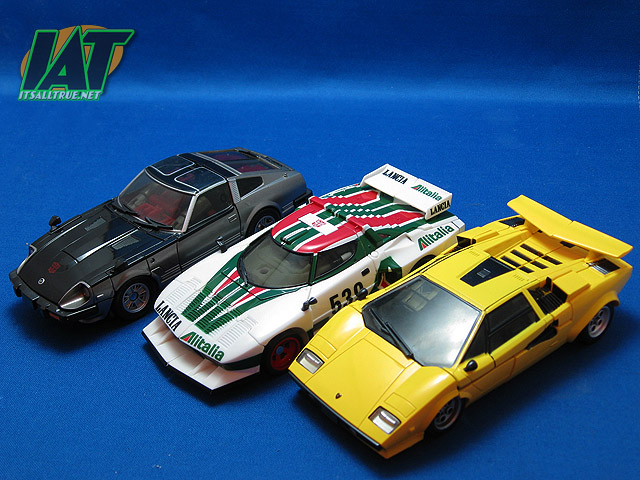 By the specs, Wheeljack should rock as hard as the previous releases. His alt mode is gorgeous. A fantastic update to the vintage diaclone and a great representation of the original Lancia Stratos, including the Alitalia markings. I’ve been waffling on picking up his moldmate, Exhaust, in a few months and if anything will put me over – it’s the alt mode and how it will look great with another race car design. It’s also well executed as a toy – the wheels roll freely, none of the transformation drags or catches, it really works like a car toy should. 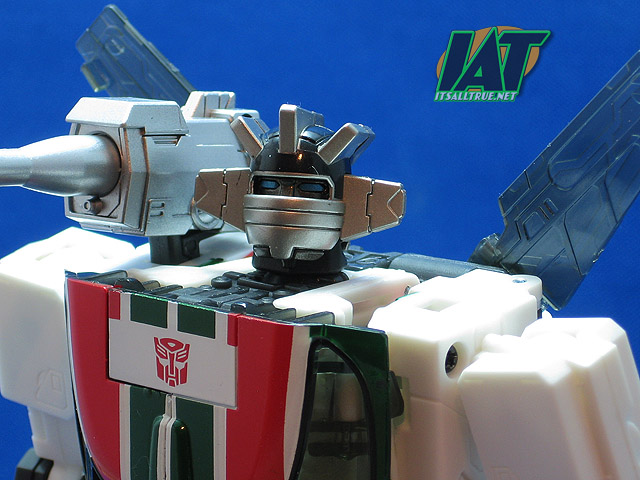 When transformed to his bot mode though, an ineffable feeling sits in. The figure is thankfully going for the cartoon model and ignoring the monkey-armed vintage toy. I appreciate that. And it isn’t the transformation itself that confounds me, it’s actually rather slick. Each time an MP comes out, I remember and worry about those old RID days (Afterburner! Ugh!), but the MP designers keep it amazingly simple. Like past releases, it’s easy and rather intuitive. I have a hard time getting the “wings” into position, but that’s partially due to my own fear of breaking them and perhaps being overly delicate. Other than that, I had it down in one try and enjoy switching it back & forth. Continue to Page 2…