At SDCC, Mattel revealed all the MOTU Classics bios through November, so we haven’t had many updates coming through Facebook lately. This weekend Mattel had a few updates for us – Buzz-Off’s bio and an info on Grizzlor, the Palace Guards, and Battle Armor Skeletor.

Here’s what Matty had to say: 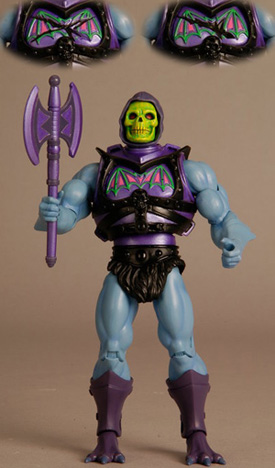 A few new MOTUC updates for you.

1: We just got in early samples of Buzz-Off in package. Note that we will see if there is time to turn his helmet around in package. Still pending.

2: Got some new images of Battle Armor Skeletor as well with the chest plates and axe. Still not 100% final, but getting closer. Check out those purple feet just like fans demanded!

3: Grizzlor’s head is removable. Earlier we had thought it would not be. Looks like I spoke to soon!

4: The Palace Guards are slipping out a bit due to some logistics (yes we know how you feel about this word…). Look for them now at the start of 2011. Note they are not part of the 2011 subscription even if they slip out to early 2011 avail.

A lot more MOTUC greatness is coming in 2011. We should have the April figure to reveal soon. The sculpt just came in and looks fantastic. Once it is painted we’ll reveal this next figure to the fans. Here is a hint, he is a member of the Masters….

That’s it for now, see you in the toy aisles or on Mattycollector.com!

1. Buzz-Off looks good. The helmet being backwards is funny. Hopefully, that’ll get sorted out for MOCers.
2. I still don’t get the toenail paint on the “boot” and I kinda wish they were metallic to match the armor. The armor looks fantastic though.
3. The head is removable – that’s step one. Step two is getting that other face…
4. My wanting the Palace Guards ASAP is now in conflict with my wallet. I really don’t want to buy the Guards in January… 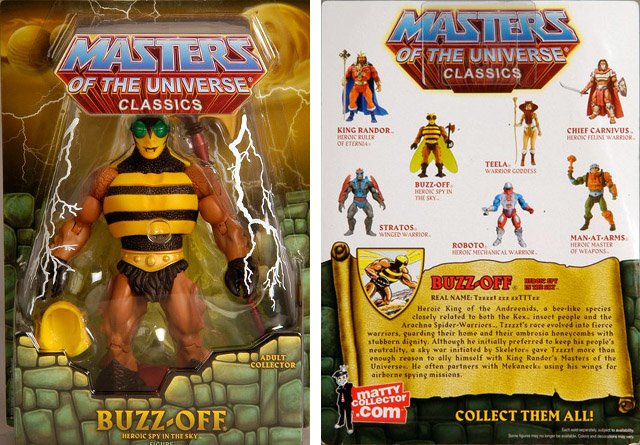 Buzz-Off – Heroic Spy in the Sky, Real Name: Tzzzzt zz zzTTTzz
Heroic King of the Andreenids, a bee-like species closely related to both the Kex insect people and the Arachna Spider-Warriors, Tzzzzt’s race evolved into fierce warriors, guarding their home and their ambrosia honeycombs with stubborn dignity. Although he initially preferred to keep his people’s neutrality, a sky war initiated by Skeletor gave Tzzzzt more than enough reason to ally himself with King Randor’s Masters of the Universe. He often partners with Mekaneck using his wings for airborne spying missions.