That’s right, another Galaxy Quest article. While at a comic book convention over the weekend, I stumbled across this great model of the NSEA Protector. I knew this scaled replica existed, but I’d not seen one in person until now. With the decent price tag it was sporting, I found it impossible not to pick up.

Like I mentioned in my Most Requested, Galaxy Quest is one of my favorite movies. It’s just a shame that there’s so little merchandise for it. But earlier this year there was a glimmer of hope for those fans who haven’t given up. Pegasus Hobbies produced two model kits. One was for the Protector, the other was for the Vox Communicator and Ion Nebulizer. Both kits were offered as build it yourself models or prebuilt sets. Since I’m not the greatest with models, I opted to pick up the completed ship. 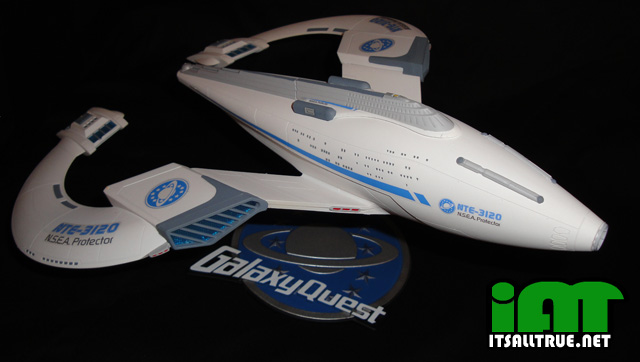 One reason I love this model so much is because it resembles the toy ships from the old Playmates line and the current Diamond Select Toys line. Being a big Star Trek nerd, these toy ships always reminded me of the models that Picard and Sisko kept in their office. Now I can add the Protector to this group of my favorite sci-fi ships. Now if some company would just make similar toys of Moya and the Andromeda. 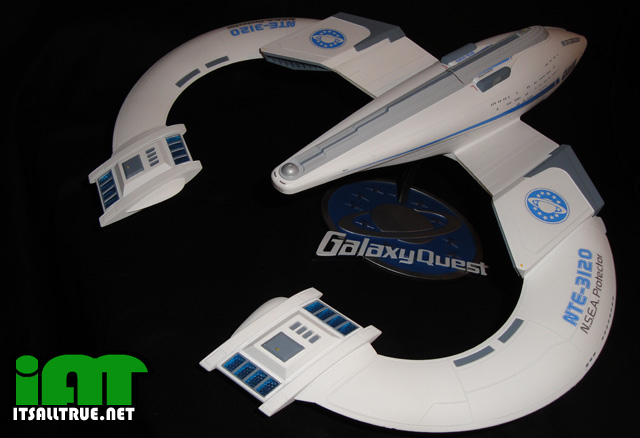 The Protector’s sculpt is incredibly sleek. I never realized until holding it that it really has similar body properties of a cruise ship. But even with this smooth design there are tons of tiny details that cover the ship. Everything from the honeycomb pattern in the engines (which are translucent blue) to the little recessed windows that run along the body. There are even tiny raised lights dotted around the ship like an airplane. I keep turning this ship around, inspecting it as I write, and still discovering new areas that have tiny sculpted features. It’s truly an impressive sculpt.

To add to the amazing sculpt is the fine paint and sticker details. The designation codes, NSEA symbol, and running stripes are all decals. Most of them seamlessly blend in with the design of the ship, but I did have one issue. On the bottom of the ship, one of the stripes cracked along a ship seam. This isn’t too big a deal since it’s hardly noticeable, but it is something you’ll want to watch out for if you’re inspecting one of these ships to buy. As for the paint, it’s incredibly precise. There are a couple of very tiny slop marks. But considering how small some of these details are, I’m totally ok with it. I don’t think my shaky hands could do any better. 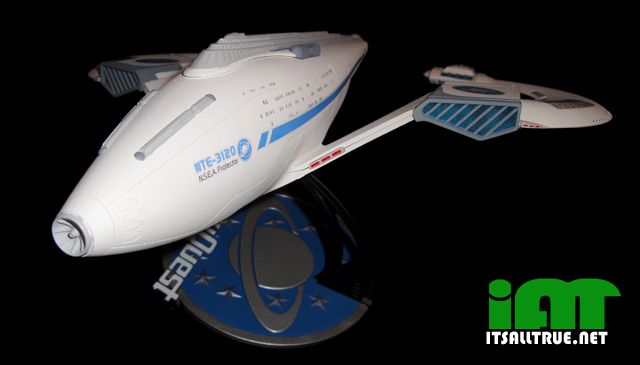 Articulation? Surprisingly yes. It’s not the ship that can move, but the base. The small Galaxy Quest stand that comes with this model is perfect. The base looks small, but it’s incredibly stable. I haven’t had a problem with the model tipping over at all. The Protector sits on top of a peg that’s attached to the neck of the base with a ball joint. This allows you to choose the angle at which to display the ship. I wasn’t expecting any articulation here, so this was a really nice surprise. 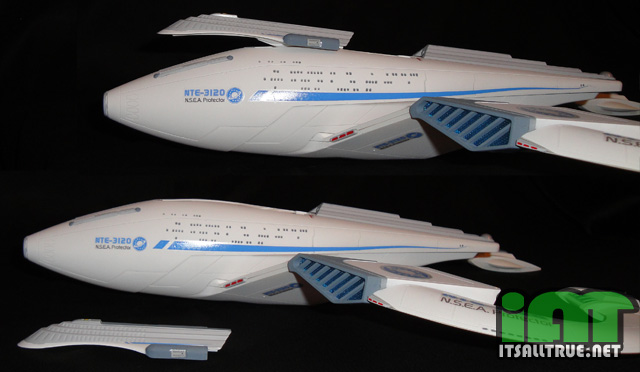 Last, but certainly not least, is my favorite feature of this model. I was totally surprised to discover that the smaller command ship (from the end of the movie) is a separate piece and can detach from the larger ship. Sitting in a recessed area, it blends in smoothly with the larger ship and his held on with a magnet that rests inside the model. It’s one thing for a company to make a model, but to be this accurate surprising and very impressive.

So, if you’re a fan of Galaxy Quest, I highly recommend this ship. Not only is it a great display piece, but the attention to detail is fantastic. The prebuilt model retails for about $40, but if you shop around you might find a better deal. Even at full price it’s still a great buy though. Looks like I’m going to have to pick up that communicator/nebulizer set now.