You don’t see many JLU reviews here at It’s All True. It’s because I can never find them. Movie Batman. Superman & Starro. Firestorm. I don’t buy every JLU figure, but I would’ve bought those if my Target bothered to comply. So you can imagine my surprise this week, when I ran across Superman Red & Blue.

If you’re a regular reader, I’ve surely bored you to death about how I learned to read with DC’s “Best Of” and “Blue Ribbon” digests. It skewed my comic love to a slightly older demographic than I usually find myself in. It gave me an appreciation for the (now somewhat reversed) legacy hero aspect of the DC Universe, Zatanna, Haunted Tank, Strange Sports Stories, all sorts of great stories I would’ve otherwise missed out on. And among them was The Amazing Story of Superman Red & Superman Blue.

While I appreciate Mattel making some photoshopped card art for these two figures (Superman never appeared this way in JLU), the bio makes me chuckle. Perhaps in whatever continuity the DCAU might have, Superman is split into red & blue by simple exposure to red K, but in the comics it was actually the four primary colors of kryptonite and Superman did it to himself hoping to increase his mental prowess. The part about “simultaneously resolving problems in his civilian life as Clark Kent” is a cute boiling down of how the original imaginary tale played out. Kinda makes me want to go dig those digests out of storage… 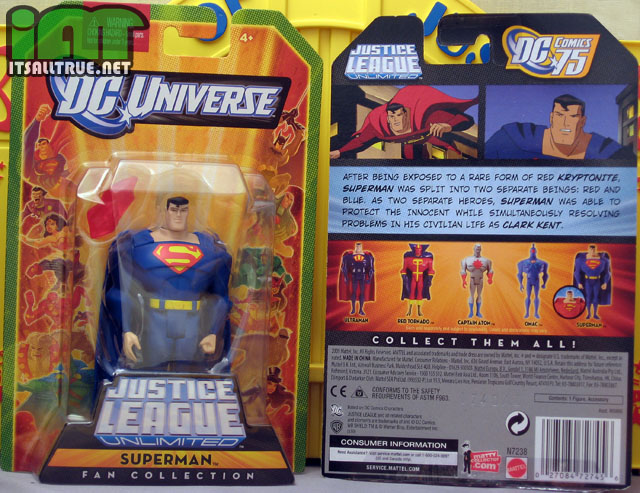 Other than the strides Mattel took to make it appear as though Superman Red & Blue fit into the cartoon, there’s not much else to say about the packaging. One funny thing that I never noticed in the store is that the JLU bubbles have been updated to be little versions of the bubbles on DC Classics. That’s kinda neat, but it’s still getting recycled. 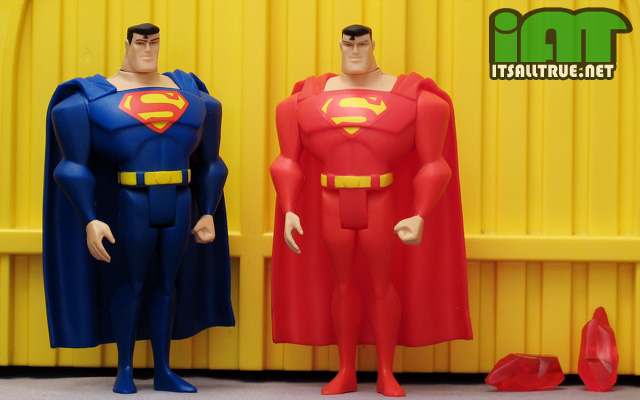 The figures are more or less the same sculpt as the original Superman from… 2003? Some details have been removed, but it’s pretty much unchanged. I’ve never been a big fan of it, but it is what it is and in this instance that’s exactly what I want. As I’ve noted several times in the past, I get annoyed when companies pass over easy repaints for weird stuff. And while I’ve been fortunate enough to get the modern electric Supermen a few times over the years, this classic tale has gone overlooked. I’m happy having these JLU figures despite not being a big JLU collector, but I’ll always hope to see this pair in DC Classics someday.*

* – The funny thing is, I imagine some JLU collectors could do without these figures since they didn’t appear in the cartoon while some DCUC collectors would happily take them over any figure that first appeared somewhere besides the DCU proper. Collectors are cute like that. 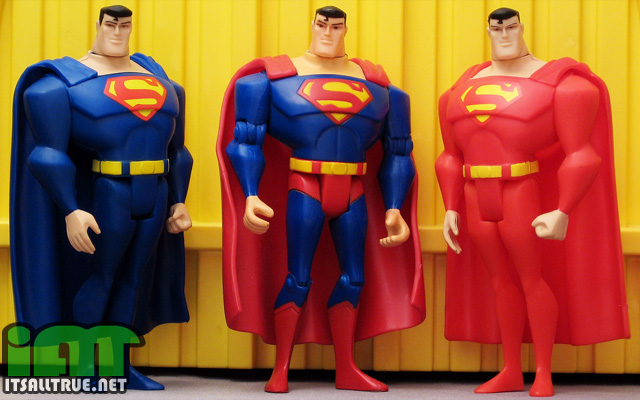 I’m pleased to report that both figures stand! I’m not sure what the current percentage of this line that can stand on its own is, but I’m glad these two are on the right side. Being primarily the color they were cast in, these two didn’t need much paintwork. The symbol tampos are both clean while the paint on the belt is a little fuzzy, particularly around the seams. It’s funny, because looking at them I think the paint is mostly fine and fits in with the figure’s size and amount of detail – but not the price! I spent $18 plus tax for the pair and even though I’m getting a good nostalgia high off owning them, that’s a crazy price. 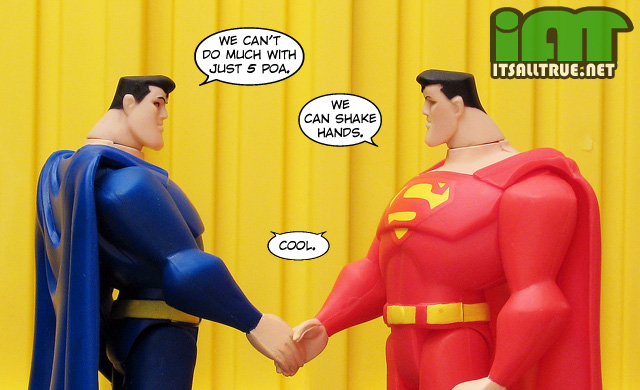 The figures do include a chunk of reused kryptonite (it’s appeared a couple times before in green) to help ease that price, but I’m going to pick on Mattel a little bit for that too. The adjusted back story, that this was a result of red K, makes the red K accessory sensible – but two of them? I think it’s reasonable to expect that everyone who bought one, bought the other – and Mattel should have thought of that. While a chunk of clear plastic doesn’t really add enough value to warrant $9, I’d feel a lot better if we’d gotten two different colors. I’m always down for more kryptonite, and some blue might have been nice here even if it didn’t quite fit the back story they’d put together.

Overall, JLU figures are simple toys with a clean, defined style. While I’ve moved over to collecting DC Classics in recent years, I enjoyed collecting JLU for a long time and still like getting the occasional one when I can find it. Though at $9, maybe I should be glad I find as few as I do.