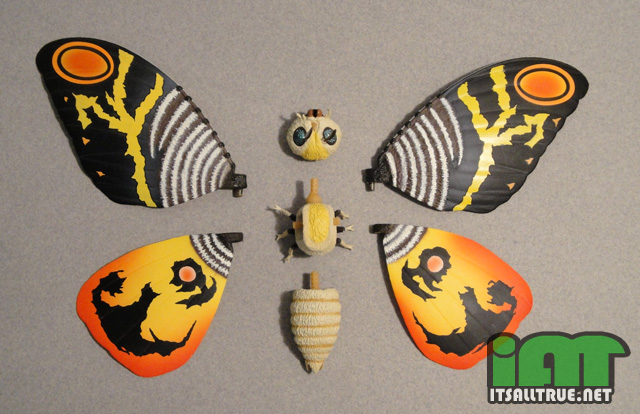 Even with all those amazing details, this figure isn’t quite perfect. I was really disappointed with Mothra’s articulation. When I hear Revoltech, I think super articulated. I know there’s not a lot to articulate on a moth, but I was still expecting more than what I got. Mothra’s head and abdomen are both attached to her thorax by a revolver joint. They have decent movement downward, but are limited going up by their placement and shape. Then there’s one more revolver joint running through the center of her thorax, allowing the two larger wings to attach on each side. This really limits movement by making the wings directly connected. A double revolver would have been less constraining here by allowing you to move the wings more than just half an inch up or down. Each small wing connects to the larger one with a swivel joint, allowing them to still pose separately from the larger wing. Mothra’s legs are each connected with a swivel joint, but they are so thin and made from such soft plastic that I recommend you don’t move them much. Two of mine started to tear a bit when I was moving them back and forth. Lastly, there’s her tiny mouth, which can open and close on a hinge joint. I love this joint. It’s such a tiny part that you think it would have been molded. This way it allows her even more expression.

Mothra comes with a nameplate, a stand peg, a base of the destroyed Tokyo Tower, her cocoon, and the always familiar orange box. The Tokyo Tower base is actually a scene from her original movie. Her larvae form tries to climb the tower, but ends up pulling it down. So she decides to make her cocoon right there at the base. The military tries to destroy it, but only ends up making her an angrier moth when she emerges. The base itself is nicely detailed with the tower printed over translucent plastic for added stability. The stand peg can be plugged into either the cocoon or the tower for different poses also. My problem here is that she doesn’t come with an alternate base/stand. If you want to pose her with the other monsters you either have to do it around this base or use someone else’s stand. I used Gyaos’ stand in my group photo so she could be flying. 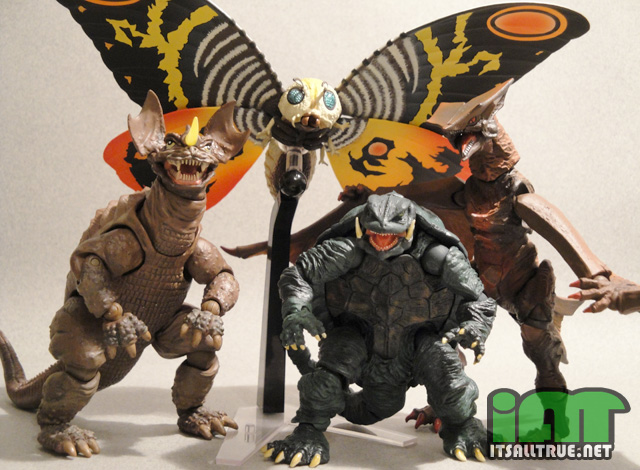 Something I knew, but never really thought about until after I had begun playing with this figure is that she is missing one very important accessory: her larvae form. I don’t want to be too nitpicky, because I love this figure, but I feel like this is a pretty basic and important part to the Mothra mythos that should have been included. Plus, Gyaos got his premature form, and he’s nowhere near as important as Mothra! If Revoltech is planning on releasing her larvae form as a separate figure, it had better come with some really nice accessories. I don’t know if paying $30 for a worm is worth it, (maybe they can at least make both twins) but at this point I don’t see any other way we’ll get a larvae figure. 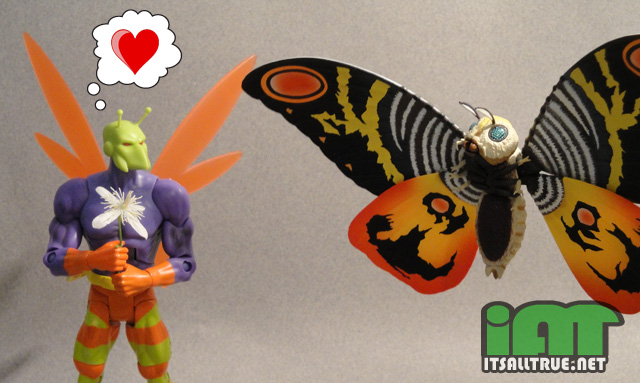 So, even though I wish the figure came with her larval form and a flying base, and even though the articulation is a little lackluster, I still love this figure. Strange, right? Well, it’s because the sculpt is so perfect, and the paint is exceptional, that the spirit of Mothra was still captured in this little totem. Even those downfalls can’t keep this figure from being a great Mothra likeness. Just look at this group shot and tell me she doesn’t fit in perfectly. Plus, it’ll be even better when there’s a Godzilla to join her. You can expect to pay about $30 for Mothra, and if you’re a fan then I think you’ll agree that she’s worth it.