While customization has always been a part of toy collecting, the ‘Do it yourself’ population seems to get larger by the day. And some of those DIYers have started up small businesses to sell their wares. One such company, Spy Monkey Creations, is at the forefront and making some great 6-7″ scale weapons.

As is the case with accessory reviews, there’s often more to show than say. And while SMC’s original creations are scaled to fit with most 6-7″ figures, they work especially well with Masters of the Universe Classics. As such, I think it’s time to revisit ye Olde Weapons Shop… 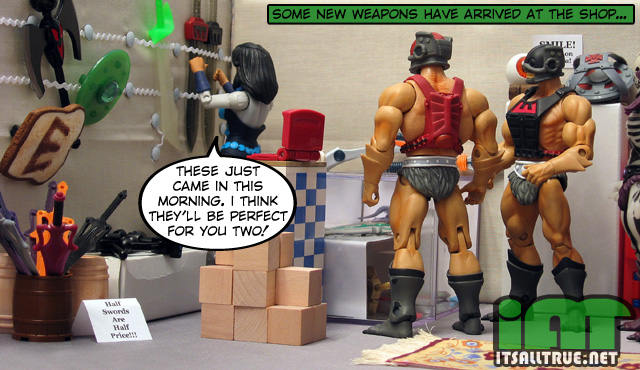 I first ‘met’ Jeremy Sung, the President & Head Designer of Spy Monkey Creations, online about a year ago. He was getting started and had produced the Master Blade of the Empyrean; offering some casts to other collectors through his blog at AFI. I greedily purchased two – one in the red color shown on his blog and a second in black. 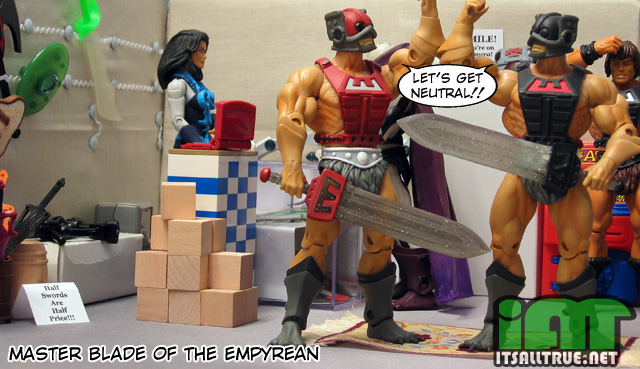 When I purchased the two swords from Spy, I was in need of a weapon for a simple custom of mine, Zadoc (that’s him on the right). I knew the swords had the right look and I figured they would be decent accessories that should blend in well enough. When they arrived, I was floored by their quality. There wasn’t just detail, but precision detail – sharp, straight edges and a symmetrical sculpt. They didn’t just blend in okay – they fit in perfectly, easily passing for the real deal.

When Spy teamed up with two other talented dudes to form Spy Monkey Creations, the Master Blade was the first item available – in the black and red shown above as well as in red with a translucent blue blade. 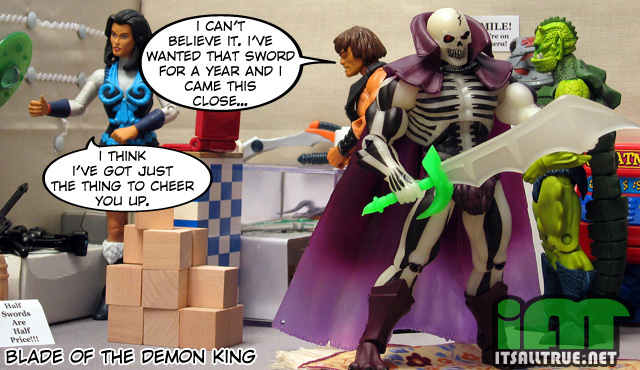 Even though I enjoyed my first two weapons, life has a tendency to get in the way and I quickly found myself behind on picking up SMC’s subsequent offerings. One such accessory was the Blade of the Demon King. Luckily, SMC has an open stock policy and their items are made-to-order, so I didn’t miss a chance at owning one. This blade is available in three versions: bloodlust (red blade/black), blue venom (blue blade/purple), and ghoul’s aura (GITD blade/green). I opted for the Ghoul’s Aura version because I love anything that glows in the dark. Again, I was surprised by how handsomely crafted it was, but what really got me was the GITD feature. When I first charged it up, it was giving off a green glow in a lit room. That was awesome. 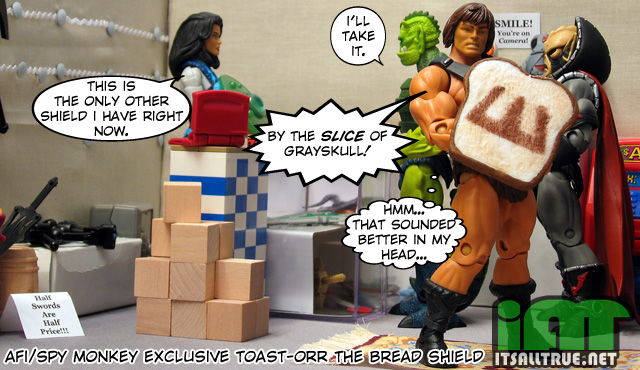 Some fans may not like silly in their MOTUverse, but I’m all for it. I had to have this AFI/Spymonkey exclusive as soon as I saw it. The Toast-Orr Shield is the most textured of all the weapons so far, with a rough surface to bring the toast theme home. A large handle is affixed to the reverse side for the figures to grip – it feels pretty sturdy back there and, of course, looks great with Wun-Dar. I didn’t remember it for the picture, but I have a toy loaf of Wonder Bread (bag and all) for Wun-Dar to use as bludgeoning weapon and along with this shield, he’s a favorite on my shelves. Nothing more dangerous than a guy who loves his bread. I would’ve liked my shield to be a little more burnt, but the lighter brown works just as well. When I eat toast, I prefer it lightly toasted anyway. 😉 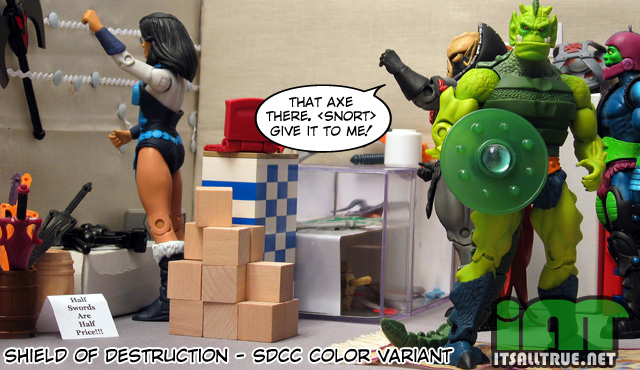 I’m cheating a bit here. This shield is surely available as a special order, but it’s not currently available on the site as is. For SDCC, SMC created unique colorways available only at the con and in limited, blind-bagged quantities online. I found the idea of picking up randomly colored weapon appealing and took the plunge. About a week later, I received this shield in the mail. Like the Toast-Orr shield, it’s got some nice details and the gem is a nice touch. It’s been in my accessories bin because I haven’t found a good home for it yet, but having it in-hand has convinced me to pick up the Shield of Deliverance/Destruction in a couple of the five different colorways offered on the SMC site. 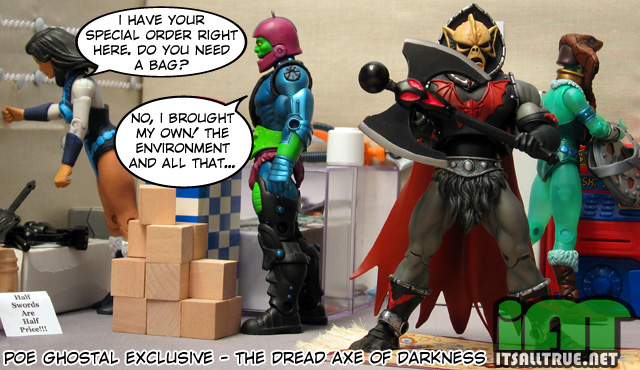 This is another long-available piece that I picked up only recently. On the SMC website, you’ll find this weapon called the Witching Axe of Ruination and is available in orange or purple. This black version, the Dread Axe of Horrors, is exclusive to Poe Ghostal’s site. I received this piece from Poe just a few weeks back and the first thing that struck me was the size. I knew the swords I already owned were a little over 5″ and I’d seen the pictures of the axe around the net, but I wasn’t prepared for the size of the axe. It’s massive – I almost thought it would be too big when I pulled it out of the box, but as you can see in the pictures, it fits perfectly with the figures. It’s a fantastic addition to the lineup and I like it best in this color scheme. 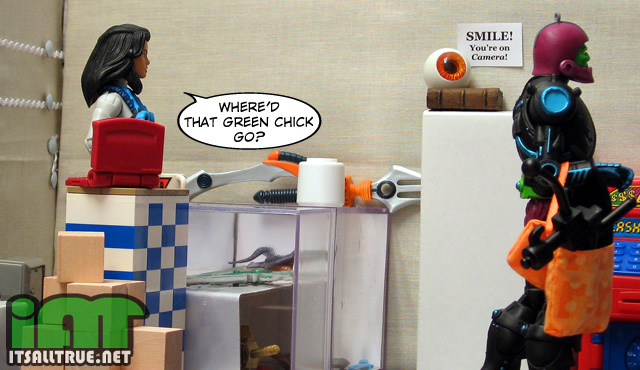 For a detailed look at the Dark Arsenal of the Space Pirate, we have to go home with Trap Jaw… Continue to Page 2…