I was so happy with the General Grievous I bought last week that I decided he shouldn’t be the lone representative of the Vintage Collection on my shelves. So, I headed off to Toys R Us to pick up another figure. This time, I was after Grievous’ bodyguard droids, the MagnaGuard, and I wasn’t disappointed.

The IG-100 MagnaGuards are an advanced battle droid series created to be General Grievous’ personal bodyguards and elite enforcers. Different models are denoted by their various colors, gray being the rarest. They are programmed on the use of various weapons, but are usually seen brandishing electrostaffs made from the lightsaber resistant metal phrik. Grievous personally trained each Guard in the seven classic styles of lightsaber combat. They can also remain active after their heads are removed. This makes them the deadliest of opponents, even for the Jedi. 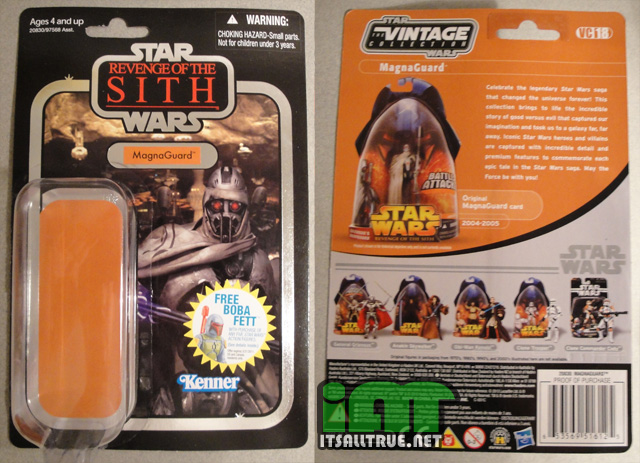 First, I wanted to talk a little about the package. I don’t usually feature this part of the toys I review because it usually doesn’t matter to me. I’m the kind of guy that believes toys should be opened, and the packaging is just the obstacle standing between me and my fun. Recently, I’ve been admiring the packaging of the new Star Wars Vintage Collection. The classic deco, complete with peg hole instead of J-hook, not only looks sleek but it also stirs a childhood nostalgia in me. I remember these from so long ago and I just can’t help but smile when I run across them on the toy shelves today. It’s almost a shame to open them, almost. 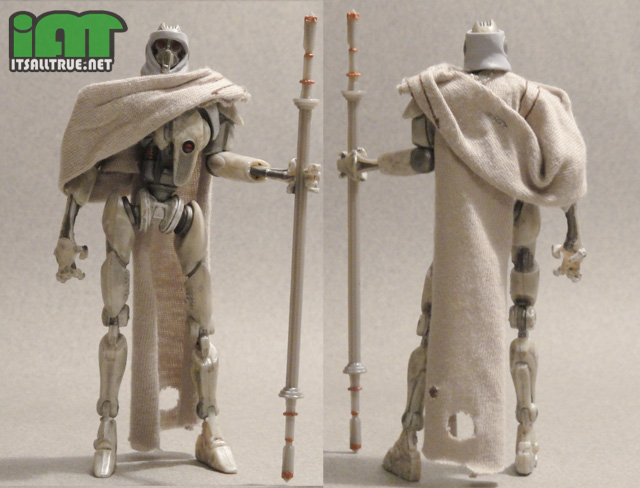 The MagnaGuard’s sculpt is impressively detailed. His all-new body and extremities are crafted to resemble how a real robot would be put together. Each piece blends nicely into the next without the harsh cuts of articulation. There are small hydraulics and wires sculpted underneath the armor throughout his body. Even on his tiny head, behind his red eyes, are the sculpted details of robotic workings. On his front and back are two soft armor pieces that can be removed to show his robotic guts underneath. Then there’s his sculpted head wrap, which is also removable to show his bare skull. I honestly don’t know if they could have added any more detail to this figure. 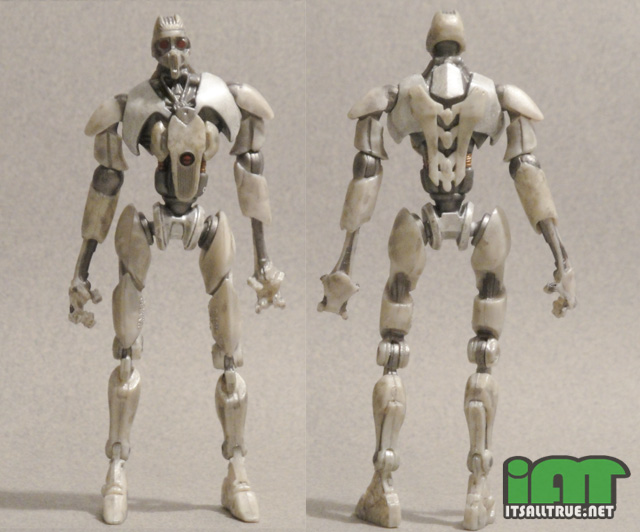 Adding to the high detail of this figure is his amazing articulation. The MagnaGuard has a ball-jointed head, upper torso, and hips. His shoulders and elbows are swivel-hinges. While his knees and ankles are regular hinges. Lastly, his forearms are swivel joints. With this amount of articulation, there are few poses the Magna Guard can’t take. Plus, he can actually hold his poses since his legs are made of a sturdier plastic than Grievous’ legs. I’m particularly happy with all the ball joints, especially the hips, which makes this figure feel truly self-animated. 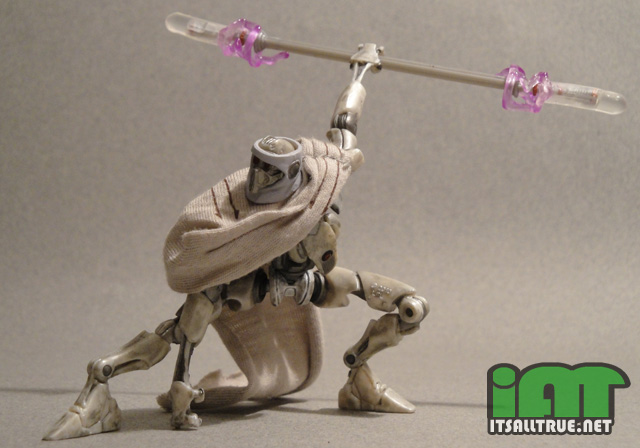 To top off the trifecta of detail on this figure is his superb paint job. His armor is a light gray, while the workings and guts underneath are dark gunmetal gray. There are dabs of silver and copper to highlight various pieces, and the dark red of his eyes and chest sensor stand out among all the metallics. But what really makes this figure stand out is his dirty and worn look. Hasbro really went the extra mile here and gave the MagnaGuard a dark dry wash. This makes the figure look as if he’s been around a few battlefields and lived to fight again. It’s a small detail, but it adds tons of character to a droid that would have otherwise looked like he was straight off the factory floor. Continue to Page Two….