On a recent outing to Wal-Mart, I was surprised to discover a second wave of How to Train Your Dragon figures. Although this series contained mostly repainted versions of the previous dragons, I was stunned to see a newly sculpted Toothless figure. But would he be better than their last attempt?

When How to Train Your Dragon premiered earlier this year, we here at IAT saddled up and headed for the movies. You can check out the review here. As much as we enjoyed the movie, the toy line left a bit to be desired. I picked up the Night Fury toy (the lead dragon) and was disappointed that my favorite cute little dragon was only available as an angry-faced and immobile hunk of plastic.

With the DVD release coming up in October, it’s the perfect opportunity for Spin Master to capitalize on the advertising and release a new wave of figures. The new wave of figures consists of a rerelease of the Gronkle and the Zippleback, a repaint of the Adder in blue, a repaint of the Nightmare in red and a completely new sculpt of the Night Fury. 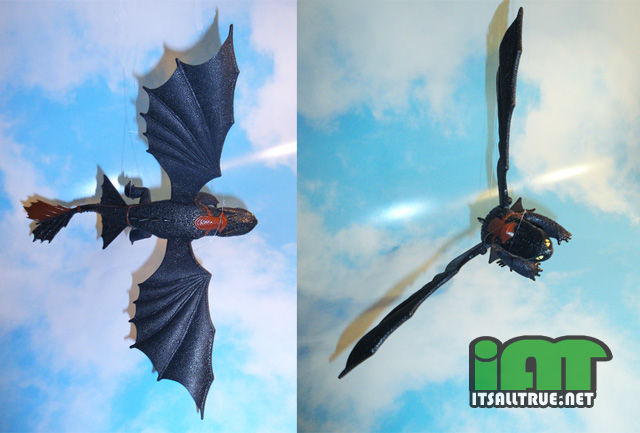 The new figure (which I’ll refer to as Toothless in the remainder of the review; the older one will be referred to as the Night Fury) is the same basic design as the original. They both have a similar action feature — when you squeeze the back legs it causes the wings to flap (or swing back in the case of the original Night Fury) and the mouth to open—and they both have a removable tail and wings, for ease of packaging. 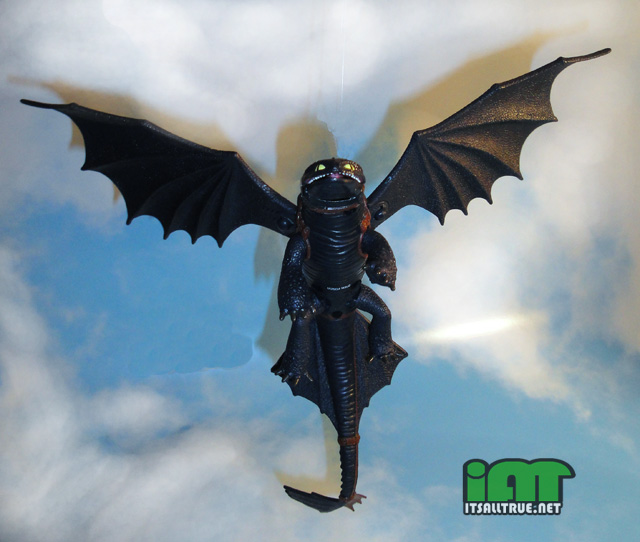 At first glance, there seems to be little to differentiate them. When it was still in package, I honestly thought it was the same sculpt with a harness on it. The heads are almost exactly alike, but there is something subtle in the Toothless figure that makes him more endearing. He has more defined nostrils which help to accentuate his snout and make him look less lizard-like and he also has wider eyes. The combination of the two changes and even the slight tilt of his head help to soften the look of Toothless. 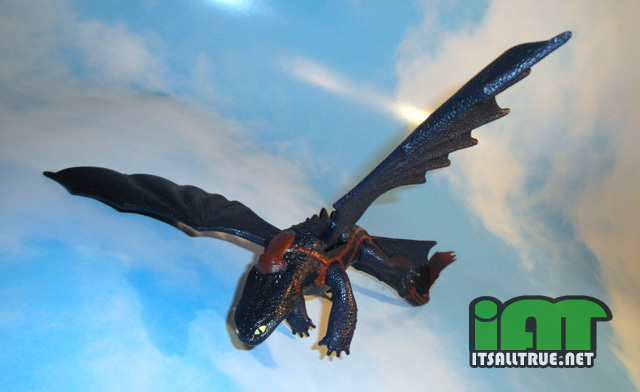 The body hasn’t been left alone, either. It is slightly larger and Toothless’ back is arched to make him look like he is leaping or flying. His skin is a bit shinier than the original Night Fury’s and, though they both have the same amount of detail in the pebbling of the skin, the new Toothless’ skin seems to have more definition. This version of Toothless is very clearly the domesticated one and he sports his saddle from the movie (though, considering the Hiccup figure’s lack of leg articulation, it makes for some rather awkward flights). The saddle, though not sculpted with the same amount of detail as Toothless himself, is fine and even sports some stitches down the straps leading to his tail. The brown replacement fin on his tail is made of a softer, rubbery plastic (similar the original Night Fury’s tail) whereas the rest of his tail is molded in some kind of happy medium.

Now, if you remember my first review, one of my biggest complaints about the original Night Fury was that it barely had any articulation. The wings, jaw and hind legs were the only articulation and, being the action feature, were contingent on one another for movement. In a missed opportunity, the front legs didn’t move at all and were molded of rubbery plastic. While the new Toothless figure still has limited articulation, the problem with the front legs has been fixed and they now have a swivel joint so you can enjoy posing this figure a little bit.

And, regrettably, I do mean “a little bit.”

The wings work in tandem and, if you hold down one, the other will go down. This is the only way to have Toothless flapping without his mouth hanging open. While you can move the jaw by itself, it snaps shut without you holding the back legs together. 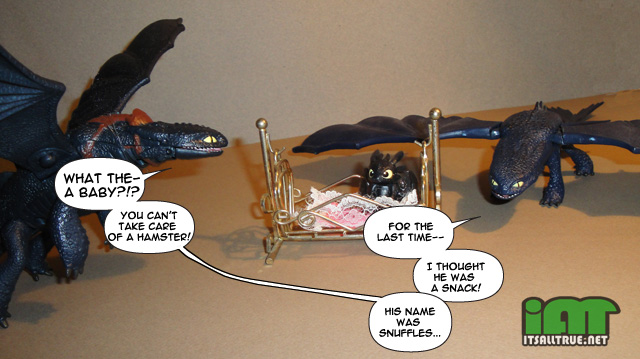 Messing around with the figures a bit, we discovered that the wings and tail for each figure have completely different pegs and holes so you can’t do mix and match between the two figures. Why would we try this? Well, I love this new figure. I really do. The sculpt is great and I can only imagine it’s as durable as the first figure (I like this one too much to go out and throw it around for you guys, sorry) but his new swooping tail tilts the figure forward so much that it becomes impossible for Toothless to stand on his feet. Removing the tail is the only way to make Toothless look like he’s not perpetually looking for a contact lens, hence the attempted tail swap with the original. I’ve gotten around it by having him perch on the top of my computer monitor. Since that’s probably where he’s going to stay, it hasn’t really ruined my enjoyment, but I could see people being annoyed by it.

Though this one is a bit more articulated than the original Night Fury, it’s still more limited because of its flying pose. Still, I can’t help but love it, even going so far as to build a harness for it to chase the cats with. This line is still exclusive to Wal-Mart and you can expect to pay around $12 for it. If you’re a big fan, this is the best one you’ll be getting until the inevitable sequel rears its head.