Noisy is away for a few days and the site is mine! Ha! Don’t worry, loyal readers, I won’t break anything, but I’ve got a few fun ideas. For one, we need monster reviews! It’s difficult to find a decent monster toy line these days though. There is Mattel’s Monster High line, but I was worried it might just be Halloween Bratz.

Before I get into the meat of the review, I wanted to touch on a debate we’ve been having here at IAT. Can monster toys appeal to young girls? Being a manly man, who only occasionally buys girl toys, I’m obviously clueless when it comes to this. But from what I can recall, there hasn’t ever been a monster toy line directed toward girls, and specifically toward the Barbie crowd (ages 6+ according to the box). I’m not sure Mattel put much more thought into this brand than to cash in with the current uber-trendiness of vampires and werewolves. But I think they might have also stumbled onto an untapped subsection of the girls market. Women who like werewolves and vampires must have liked them as kids, right? So, what do you think readers? Can a line of fashion dolls that loosely resemble classic horror characters sell to the tweens? 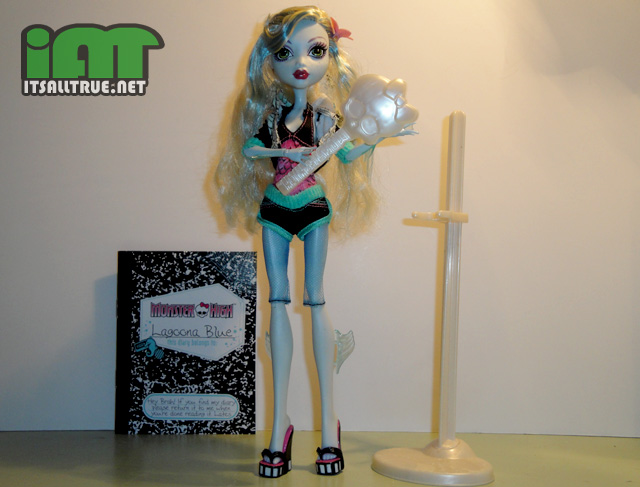 When Mattel announced Monster High, my first impressions were mixed. As I said, I liked the idea of a girl monster series, but I wasn’t quite sold on the look. Then I watched the animated shorts online, and they won me over. Now I’m not saying these episodes are the best animation I’ve ever seen, or that the writing is on par with Stephen King. But even though most of the plots are superficially silly, there is still some depth to the ideas. Like how Frankie Stein walks in the clomping style of Boris Karloff. Or when they show year book pictures and you only see Draculaura’s clothes and hair. I like that Ghoulia, the shambling zombie girl who only speaks in groans and moans, is the smartest girl in school. And I like how the flashbacks are shown with a black and white film reel look, complete with scratches. Little details like that I really appreciate, and they’re not just in the series but also in the design of the figures. 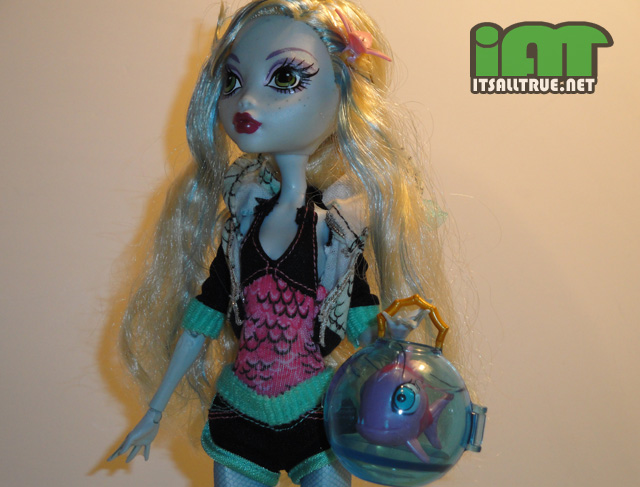 Out of the first wave released, I decided to go with Lagoona Blue for my test figure. She had an interesting look to her with some uniquely sculpted body parts. Plus, who doesn’t love blue women? Lagoona’s bio states she’s the daughter of a sea monster, although her appearance seems very much inspired by the Gill-Man from the Creature from the Black Lagoon. But, since Gill-Man is owned by Universal, I can see why Mattel went with the generic Sea Monster.

The overall sculpt of the Monster High dolls is interesting. With their large heads and long legs, the first thing you may compare them to is Bratz, that’s what I did originally. But if you look at them closely, you’ll notice the Monster High figures, even with their exaggerated proportions, still have a youthful innocence about them. They actually look like teenagers. Contrast that with the creepy prostitute-trying-to-look-young feeling that Bratz dolls give off. I would show you a comparison picture, but I refuse to sleep under the same roof as a Bratz doll. So, unlike Levar Burton, you’ll just have to take my word for it. 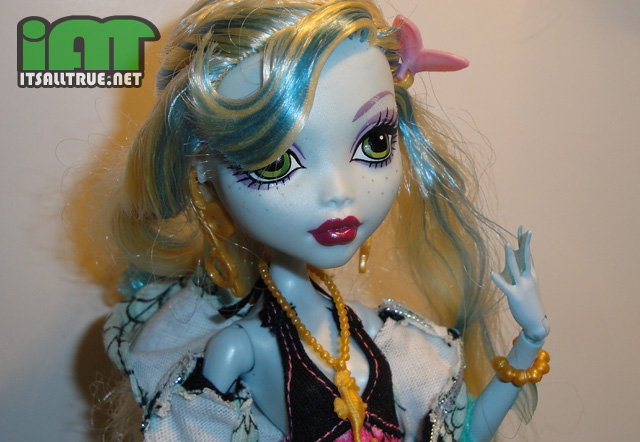 Each of the Monster High girls has a different head. They all look very similar, but each has a unique tooling. Lagoona has unique ears that look like fish fins. It wasn’t even necessary for Mattel to do, since you have to pull her hoodie off and her hair back just to see them. Although I’m glad they did do it, and I appreciate the extra detail. All the girls share the same body, just in different colors. But where Lagoona differs from the other girls is extremities. Her calves have two holes on the outer sides so you can plug in her translucent blue fins. This is another nice touch, and very functional since you have to take her fins off to change her clothing. Her forearms also have fins, but this time they are molded on. Luckily, all the monster girls’ forearms are made to be removable at the elbow for dressing purposes. Lagoona’s most distinct difference is her hands. She was characteristically given webbed fingers. The webbing is the same translucent blue as her fins while the hand is the light blue skin tone of her body. Even though this is a small feature, it really adds some unique character to her figure. 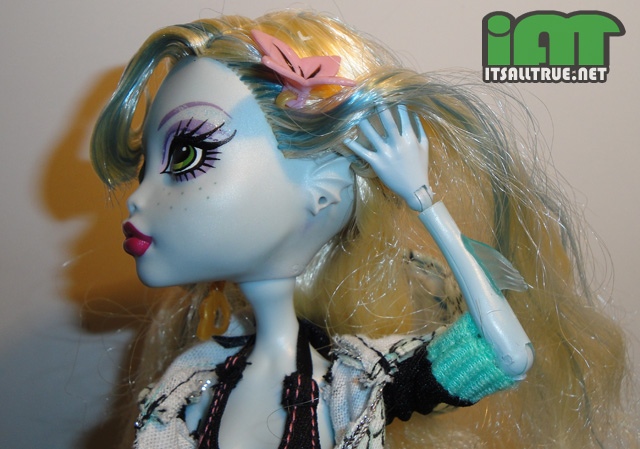 Lagoona’s paint job is a mix of simple and detailed. Most of her body is molded icy blue with clear blue used on her fins. Her head is where the paint was focused though. The red of her lipstick is slightly metallic, giving her mouth a wet look. Her large green eyes are encircled with three different shades of purple eye shadow, and the middle color is used again on her eyebrows. There’s also a slight touch of glitter just above her eyes, while her cheeks are speckled with little blue freckles. Who’d of thought sea monsters have freckles? Continue to Page Two….