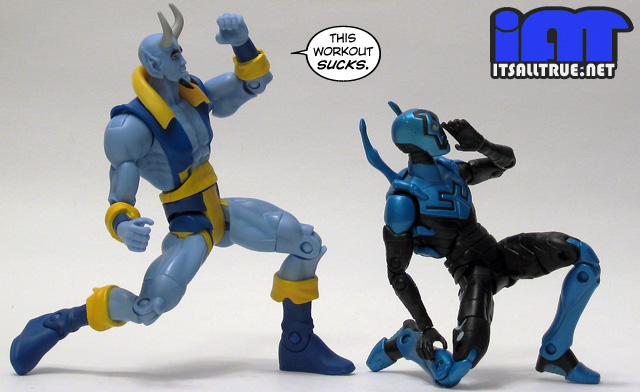 The majority of the time, we just go “blah blah standard articulation for the line blah the head is messed up blah”, but we’ve actually got something to report here. Just to get it out of the way though, Blue Devil does have standard articulation for Wave 13 – regular joints with the rocker ankle removed in favor of a one-piece foot. His head can look slightly up, but not down.

For the last few days, I’ve heard the word ‘overarticulated’ a couple times in relation to various things. Now, we all have our opinions. Some folks think 5 POA is good, others don’t think thirty points is enough. For me, my ideal is a little more than what DCUCs usually come with. Blue Beetle is much closer to that ideal. In addition to the usual points, Beetle includes double elbows, double knees, and ball wrists. If he had his rocker ankles back, some type of swivel below the knee, and the ability to tilt his head – he’d be my idea of perfect. Don’t get me wrong, Beetle is fantastic. He puts the line to shame – particularly because his extra points all look great. The double knees are more kind to the sculpt then a single piece and the wrists and double elbows are worked in nicely. This level may not work on figures that have bare skin in these areas, but I hope to see this level of articulation (or better) return in the future of this line. 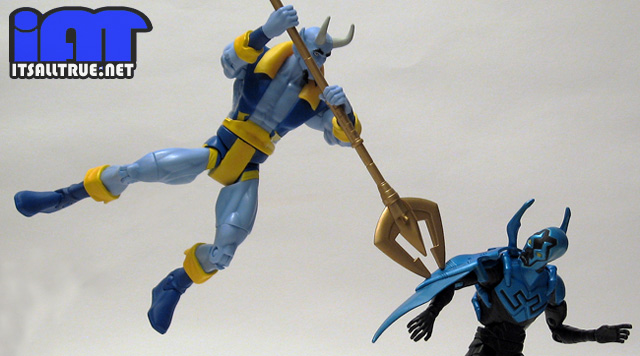 We got accessories! Blue Devil includes a great representation of his classic trident that he can hold great in a variety of poses. It’s made of a firm, but flexible plastic; perfect for an accessory. While Blue Devil now wields Lucifer’s Trident, this piece is based on his original trident that was packed with special effects goodies. Did you know it had rockets that could carry up to two people over a short distance? Yep, we got a DCUC vehicle here…

Blue Beetle’s accessories are a tale of two plastics. The wings are fantastic. They’re sturdy and clip on to his back snugly with three pegs. Even better, while the figure looks great normally, he also looks sharp wearing these. They fit on seamlessly and the clear plastic is accurate to the later appearances of this particular armor feature. His weapon arm is a different story though. It looks sharp, but it’s really soft. To the point it can almost be folded in half before it springs back to shape (remember what I was saying about Blue Devil’s horns?). I probably wouldn’t mind that it was made of such a soft plastic, but it interferes with the play value. I’m not sure where it’s supposed to clip on, maybe the bulk of the forearm or the bicep, but in either place it’s too soft to stay and will fall off if you give it the dirty look it deserves. 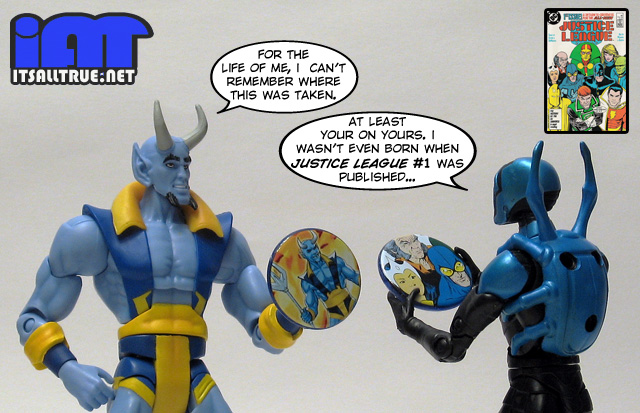 And there’s buttons. Wheee…. Again, Mattel has stumped me on the Blue Devil button. I take it personally, I really do. I should know this stuff. I can tell you that Beetle’s button is from 1987’s Justice League #1 that marked the beginning of the so-called “SuperBuddies” era. This, as does the button, featured the previous Blue Beetle. Not the oddest choice in this strange 2010 button journey, but close. 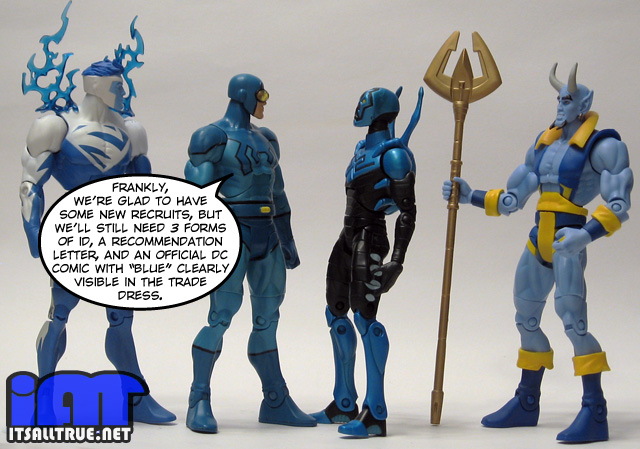 Overall, I’m really pleased with both these figures. I would’ve liked Devil to get a little bit bigger of a sculpting budget and Beetle’s sword arm to get a slightly tougher grade of plastic, but that’s about the only critical feedback I can offer on these two. Blue Devil is bringing some classic 80s to my shelf (whether he ends up with the Tridents or the Blues) and he looks good doing it with the new pieces he was given. Beetle is just an awesome figure. He’s not the right height, but I’m learning to let that go. His sculpt, his paint (nose aside), his wing accessory, and his new articulation should vault the figure to the top of the DC Classics favorite lists for a lot of collectors despite his lower comic book profile. 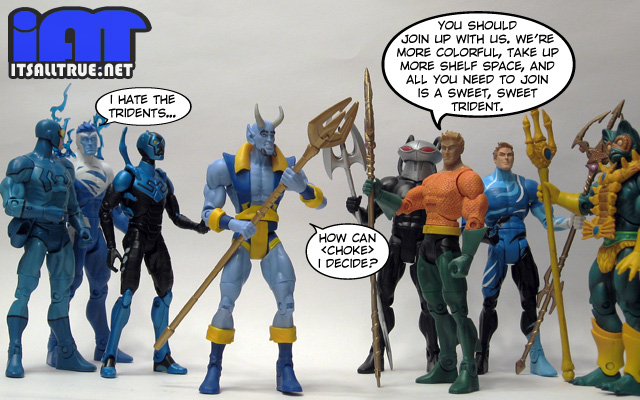