This review has got the blues. No, it’s not a sad tale of my lamenting figures that didn’t live up to expectations. It simply features two of DC’s azure-clad characters, Blue Devil & Blue Beetle III, in a tale of extra articulation, the inequities of yellow paint, and a hard decision for our favorite trident carrying blue hero.

Lately, I’ve been breaking up the reviews up and doing the character aspects separately, first one and then the other. For some reason, that feels wrong tonight, so we’re going to take a step back and do this review old school with the different aspects of the figures grouped together, starting with a little bit about each character. If you have an opinion on which breakdown you like better, let me know in the comments section. 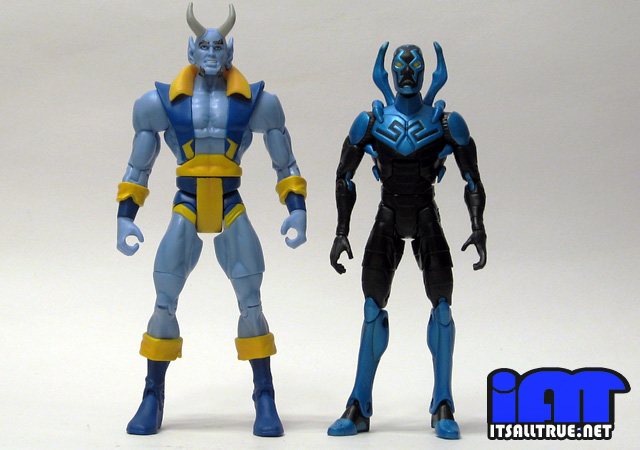 Blue Devil’s somewhat of a favorite of mine, but I think it’s largely because I associate him with one of my all-time faves, Firestorm (Devil first appeared in Fury of Firestorm #24). But Blue Devil is an interesting character in his own right. Dan Cassidy was a stuntman hired to play the character of Blue Devil in a film. The Blue Devil suit was laden with special effects so Dan could perform amazing feats with fewer camera tricks. Filming was going well until a demon attacked the set and engaged Dan in battle. He used the suit to drive off the demon, but in a parting shot, the demon zapped him and fused the suit to his body. His subsequent ongoing featured various attempts to extricate himself while inadvertently attracting super-villains looking to up their reputations. He’s been featured in a variety of stories over the years, become an actual demon, died a few times, and has an interesting history for a lesser used character. This figure depicts Dan in his original costume from the Eighties. Personally, I’m a bigger fan of his 90s armored look (when he’s resurrected as a real demon), but his classic costume showcases one of the cool/strange designs from the late Bronze Age.

Blue Beetle III is a recent addition to the DC stable; added to the line in 2006 following the death of Ted Kord, the second, technology-based, Beetle. The original, Dan Garrett, had gained powers via mystical Egyptian scarab that, after a series of events, ended up in the hands (well fused to his spine) of young Jaime Reyes of El Paso, TX. For Jaime, the scarab creates an advanced suit of armor that can be reconfigured into a vast array of armaments. Clearly, this required some deeper origins than that of a simple mystical scarab. It was revealed to be an alien weapon, similar to a Green Lantern ring, but with the nefarious intent to assimilate and control the wearer. The scarabs are normally part of a hive mind, but Jaime’s has been damaged over time and had grown to have its own unique AI. Jaime has run afoul of the Scarab makers and saved Earth from them, possibly been to shown to be a villain in the future, and is currently a member of the Teen Titans. 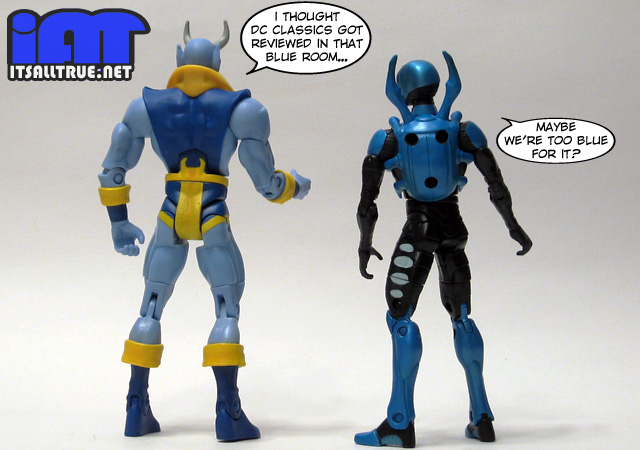 Blue Devil is the standard arrangement of a few new pieces on a buck while Blue Beetle is an entirely new figure. Blue Devil does feature new pieces including: calves, forearms, a new upper torso, a collar, and his head. These pieces do a good job of replicating the costume details, particularly the boot/glove cuffs and the raised tunic portion of his costume. I do wish the 4H would’ve been allowed to make a new abs piece so that the yellow area at that joint could also be slightly raised. It’s a small quibble, but the raised sculpt on the blue area and the flat yellow area looks odd close up.

Some folks say that Blue Devil looks like Nic Cage a bit, and I can kinda see that, but it also looks like Blue Devil and he’s smiling exactly like Blue Devil should. The horns are nice and sturdy, it seems like Mattel would’ve been required to make those softer based on the other figures in this wave, but they didn’t. I don’t normally mention mold lines because I don’t care much about them, but Blue Devil has one running down the front his horns and across his forehead. That’s distracting enough to notice.

Blue Devil is entirely new and particularly fantastic. He’s a great on-model depiction of a character with a lot of complicated detail. If you’d asked me at the beginning of the line, I never would’ve suspected that Beetle would get such great treatment in a line so heavily based on bucks. His sculpt is going to be a standout in the line for a long time to come. 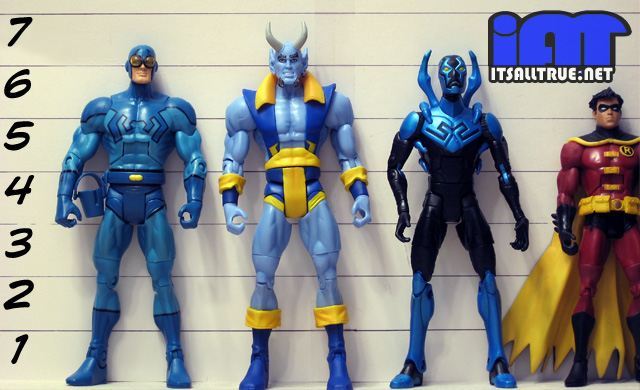 I’m not going to knock Blue Devil for his standard buck, but I’m annoyed that Mattel has yet to work the PE buck into the DCUC line. Characters like Martian Manhunter or Blue Devil that are depicted to be 6′ 6″+ would make good use of the slightly bigger buck. I know it’s a matter of quarter and half inches at this scale, but those subtle differences can make a world of difference.

Speaking of those little half and quarter inches, Blue Beetle, awesome as he is, is too tall. I wonder if some of the blame falls on us, the collectors, a bit. A chunk of us, myself included, rail against the little buck. Though it accurately represents young men of about 5″ tall, it just doesn’t seem right, probably because we’re often looking at artwork that doesn’t concern itself with height. I’m not a fan of that buck, but I accept that it should be used on young Robins (not the Drake OYL costume like it was though), and characters that are shown to be 5′ 6″ or so. That’s the case with Blue Beetle. He should be slightly taller than Robin instead of being the equivalent of 6′ tall. The figure doesn’t look bad in displays, though he does seem more twenty something than teenager at that height. 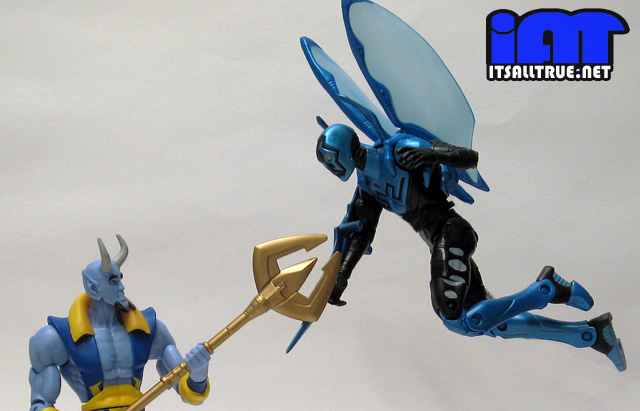 Paint is a weak area for Blue Devil, he’s a victim of the sloppy goop needed to paint things yellow in the toy world. The face details are painted well, the blue tunic is painted, but the yellow lines vary from a little rough to downright warbly. My Blue Devil is free from any major defects, but I think it’s the disparity between the face paint and clean blue lines that draw my attention to the less than stellar yellow work.

Buying toys online can get you into trouble sometimes. For the most part, my Beetle is painted great. A lot of the pieces that need to be black are molded as such and the pieces that need to be blue are separate. The lines on the chest are crisp, and the face detail is almost perfect. Almost. He didn’t get out of the factory before getting a blue paint dollop for a nose. It’s not a big deal, as little things like that aren’t often indicators of line wide issues, but he’s so close to being perfect that you have to sigh. It’s an easy fix when I get around to it. Continue to Accessories, Articulation, and the Conclusion.