You might remember that I ended my previous GI Joe ROC review, on Sgt. Stone and Shipwreck, with “The Ice Viper and that yellow Barbecue at Toys R Us are calling.” Well, they called and my wallet answered. But, it’s not that I’m weak – it’s that TRU had a 2 for $10 sale. That’s a game-changer right there. I even bought two more that I’ll review next week.

I know, I know. It’s not just the sale. It’s that I’m weak for cool toys. But hey, at least I get to take pictures and show them off, right? 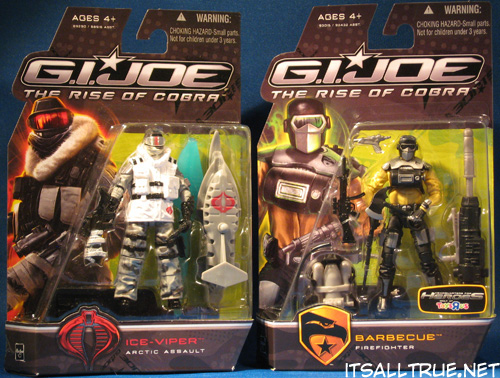 We each have our favorite type of Joes. For some, it was the expressed subsets like Night Force or Python Patrol. For others, it might be a ragtag group of their favorite characters from the cartoon/comic. For me, I can look back across the figures I played with the most and I can say it had to be Arctic Joes. Iceberg. Snowjob. Frostbite. Stalker w/ his Canoe. Coldfront. The Ice Viper. Snow Serpent. And their arctic vehicles, the Polar Bear, the Snow Cat, the WOLF, and the Avalanche (Sorry, I indulged myself a bit there). Anyway, even though they were Arctic you could play with them all year round, and if you were lucky you could take them outside when there was snow (I lost many a Joe to the wilderness for a few days). I mention all this because the ROC Ice Viper continues that tradition of great Arctic Joes. Oh, and there’s a Barbecue in this review too. 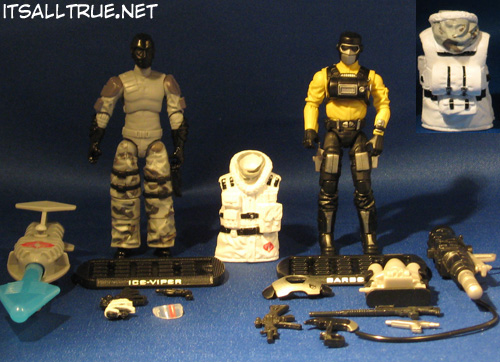 As was the case with the previous ROC figures I’ve reviewed, these figures shine best in the accessories department (the only drawback still being a lack of holsters). Barbecue comes with all the accessories of his 25th version: shoulder pads, backpack w/ removable tanks, hose, nozzle, a stand, and the axe. But, he also includes two extra rifles for good measure, and of course his ROC spring-loaded cannon thing.

Now the Ice Viper has a few less accessories, but he gets a huge boost from one of them. He includes his parka, a removable visor, a hand gun, a stand, and his rifle – wrapped in bandages for a nice touch. But it’s his ROC spring-loaded weapon that impresses. The original RAH Ice Viper was packaged with the Cobra WOLF. It had two “SNARL” Ski Torpedoes that could launch from it. The Ice Viper’s ROC weapon IS a duplicate of those torpedoes! Now it does have a giant blue arrow that shoots out of it (nothing’s perfect), but I’m fairly certain this piece could slide right onto the WOLF without missing a beat. 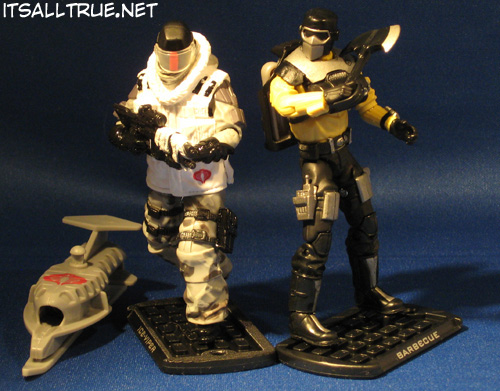 Since the movie line is built around the 25th Anniversary Joes (Barbecue is a straight repaint of his 25th figure), the paint and articulation is in what we’ve come to expect. The Ice Viper does have thick legs for his “cold” look, but they’re matched by thick ball joints to retain full movement. Otherwise, the articulation is standard. Both of the figures are painted well, but I would like to see some more paint on both of them. I wish Barbecue were more of a movie toy (he does have the logo, but that’s it). On the Ice Viper, I’m not sure why his goggles feature a red stripe instead of being full red like they’re pictured ,and I would like some paint apps on his head too (once you remove the visor, it’s a solid black piece). Where there is paint, like the straps on the parka, the camo, etc., it’s done well. I did pick and choose a bit when it came to Barbecue’s visor, but, of all the ones I had to choose from, none were that far off from acceptable. 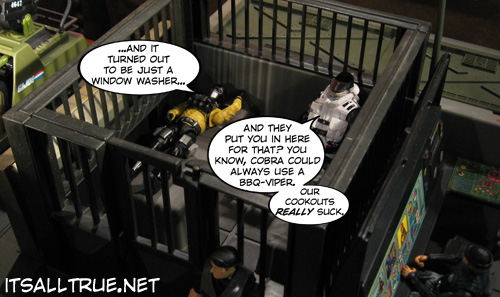 In my last review, I said I wouldn’t pick up that many more ROC figures despite them being solid toys. Well, I’ve bought 4 more since, but it’s because some of the figures are just stand-outs, movie toy or not. I might look at Barbecue as one I should have passed on because he is a fairly straight repaint of a character I already own, but the Ice Viper is a great addition to my Joes. So, I’ll close this time saying that I might end up with a few more ROC Joes if they look cool enough from the peg. And if I do, they’ll be up here for review.