Kaiyodo, the Revoltech Company, knows what they’re doing. Their newest toy line is the Sci-Fi series. It’s based on various characters from movies and animation, and I can’t get enough of it. Everything from Jack Skellington to Aliens and Predators, what more could a movie/toy fan want?

For me, I’m especially thrilled to finally be getting those giant monsters I grew up with: Godzilla, Gamera, Mothra, and anything else that enjoys brawling in Tokyo. The latest in this set is figure number seven: Gyaos, the mortal enemy of Gamera. 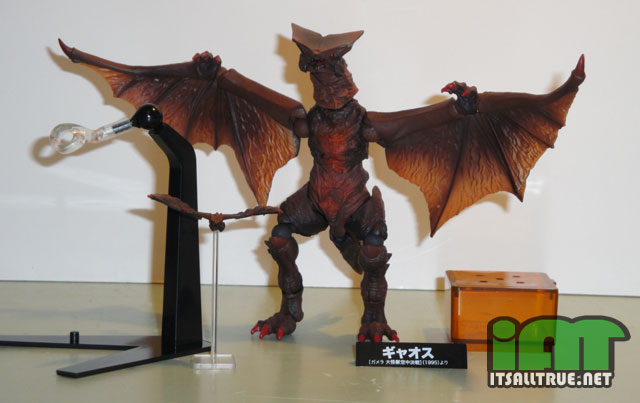 Although this version of the character is based on his appearance in the 1995 Gamera: Guardian of the Universe, Gyaos has been around since the beginning. This is Gamera’s Lex Luthor, and he makes a fitting figure to accompany Gamera’s release. After all, what good is having a giant fire-breathing turtle if there’s no one for him to breathe fire onto?

Like Baragon and Gamera before him, Gyaos was masterfully sculpted by Matsumura Shinobu. Gyaos’ body is a mixture of smooth aerodynamic lines and wrinkly, almost scale-like skin. This gives him the impression of a dangerous looking naked chicken. Sounds weird, but it’s true. If you read my reviews, you know I’m a fan of the little details, and this chicken is full of them: from the tiny serrated teeth to the little skin lines around his eyes. Plus, there’s the detail to the construction of the figure itself. While most of Gyaos is hard plastic, his wings are soft and almost leathery to the feel. These malleable parts allow him to fold his wings or take dynamic flying poses with ease. There’s also a small piece of soft plastic that basically acts as a wattle, furthering my chicken reference, and functionally covering up the joint behind his head. 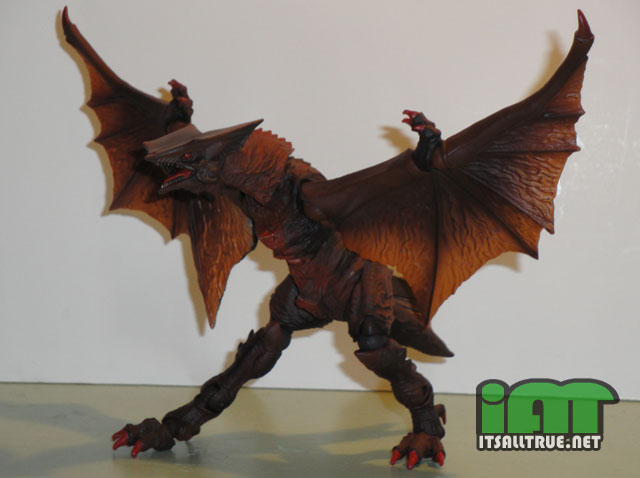 Speaking of joints, Gyaos is packed with them. There are Revolver joints behind his head, lower neck, shoulders, torso, tail, thighs, knees, and lower feet. The claws on his arms are connected to a double Revolver joint which allows his wings to take basically any kind of flapping pose you want. He also has a hinged jaw, ankles, and upper tail joint. The tail joint is interesting. It allows the top of his tail to move up and down slightly, increasing or decreasing the amount of webbing you see. Again with those details. How many companies would put in that extra joint so the tail could appear to be more in the flying position? 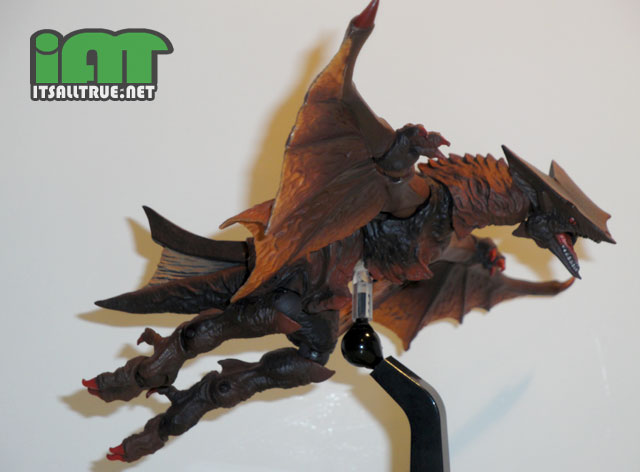 Like Baragon and Gamera, Gyaos doesn’t have much in the way of color variation. He’s mostly molded the brown color he needs to be and highlighted with darker and lighter textures where needed. His teeth do have a metallic look and his eyes, mouth and claws are painted in a blood red which really helps offset them from the rest of the body. Continue to Page 2…