This afternoon on Facebook, Matty showed pictures of Whiplash in package. We get our first look at the Evil Tail-Thrashing Warrior along with a look into his past with his bio. I think all the evil Masters are goind to end up with Daddy issues… 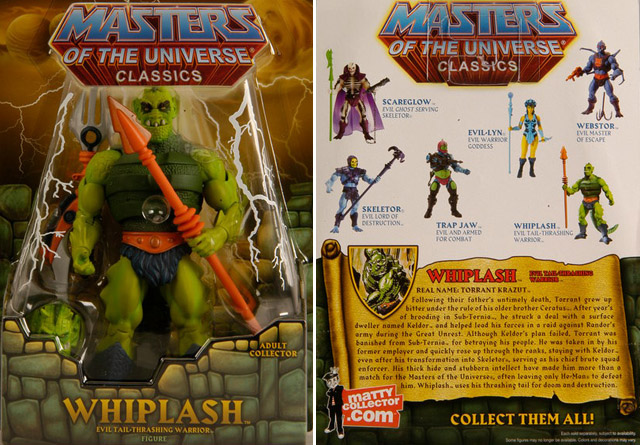 Real Name: Torrant Krazut
Following their father’s untimely death, Torrant grew up bitter under the rule of his older brother Ceratus. After years of brooding in Sub-Ternia, he struck a deal with a surface dweller named Keldor, and helped lead his forces in a raid against Randor’s army during the Great Unrest. Although Keldor’s plan failed, Torrant was banished from Sub-Ternia, for betraying his people. He was taken in by his former employer and quickly rose up through the ranks, staying with Keldor even after his transformation into Skeletor, serving as his chief brute squad enforcer. His thick hide and stubborn intellect have made him more than a match for the Master of the Universe, often leaving only He-Man to defeat him. Whiplash uses his thrashing tail for doom and destruction.

Whiplash’s Bio has been added to our MOTUClassics.com Bios page.

14 thoughts on “MOTUClassics.Com:
Whiplash in Package”