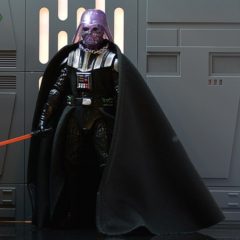 The other thing that makes the head amazing is how carefully it was done. The outer helmet came off on mine – I assume that’s a QC issue as it doesn’t appear to have been supposed to do that, but I’m glad it did because it really let me get a good look at the sculpt itself. The skull inside is fantastic. It’s well detailed (though it may not have teeth) and it’s sufficiently creepy. That skull is this weathered a bit and some blue lightning bolts are painted across it (wasn’t expecting that). The skull is then encased in the clear purple shell that makes up the mask. It looks like the skull was just put directly into the mold when the helmet was poured. I love it. There are a ton of figures with skeleton aspects that I would have loved to seen done this way.

The rest of the figure is as top notch as the first release. The sculpt on the body is good. The soft goods are incorporated okay for the most part (I like the tunic part, but the way the cape connects seems off). The articulation is probably better than David Prowse could move in that costume. The classic lightsaber with removable blade is included. I keep wanting to make a link back to my original review for these little details, but I guess I didn’t review Vader originally. I’ll need to get to that.

I think my laundry is done, so I’ll wrap up there. Overall, this is a great release. I’m not sure that it’s a really crucial figure everyone needs or even one that ends up displays forever since it’s such a one-off, but Hasbro did their best to do the figure justice with the changes they made. I also have to give a shout out to Walgreens. I love having them be a player in the action figure world. This is the fourth release I’ve bought from them and I’ve loved all four. I don’t know if it’s them coming up with variants or if they’re selecting a list from Hasbro, but they’ve clearly got an eye for it.