” I wouldn’t work for you in a million years, you cruel, evil, heartless tyrant! “ – Peekablue, to Hordak, She-Ra: Princess of Power “The Perils of Peekablue”.

As I’m working on this review, it’s some ‘clock-in-the-morning and I just finished up a long night at work and then wrapped up taping a podcast, so my mind is a million different places. Still, I wanted to get something up today after skipping Monday due to the checklist, so I’ll be taking a quick look at Peekablue. Hopefully, it’ll come across slightly more polished than a last-minute, late night toy review normally might. Hopefully.

I don’t have much recollection of Peekablue from the show, so I’m guessing she was a character that appeared infrequently. That would make sense given her powers – she can basically see pretty much everywhere, sort of an in-the-moment omniscience. A character like that could be plenty powerful and opportunistic, but Peekablue is often shown as rather timid & afraid; that her power comes with some serious drawbacks that a less upbeat fiction would probably take and run away with. 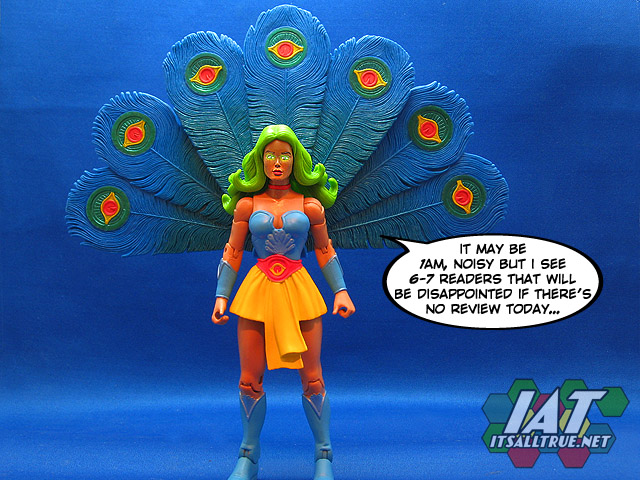 I do like the idea of her character & peacock motif, but this is one of those rare times where Kitchen Sink MOTU feels like it’s really stretching. She’s a human peacock who can spy on everything, or peek, so she’s Peeka…something? Did they try things beside colors? Peek-ra? Peekabird? Or did Peekablue just roll off the tongue real quick? I’m not knocking strange names – MOTU is rife with them and I love them, but I think this concept is just a little out there even for me. I don’t have care that it’s the male peacocks that have the brightly colored feathers, it’s just a little too on the nose for me. Your mileage may vary. As such, I haven’t really been feeling one way or the other about finally getting the figure. 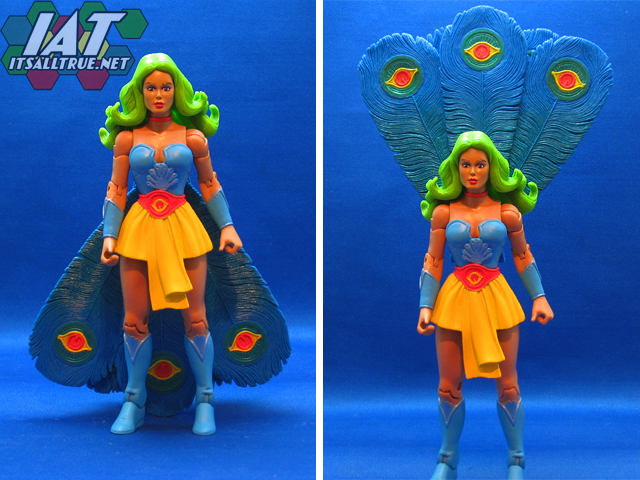 In hand, I have mixed feelings – I want to like her more than I do. There is plenty to be happy with. The newly sculpted bits are great. I love the new head sculpt, it’s very in line with the basic POP look while still being unique. And the two-part dress really pops due to the layering. She has a unique torso to accommodate the plumage, but her bodice is still thankfully a separate piece. The skirt, another separate piece, layers over that to give the figure a depth often lacking (& sorely lacking on some recent POP figures). The new hair is also a nice piece, but I might like it more for the color than anything else. 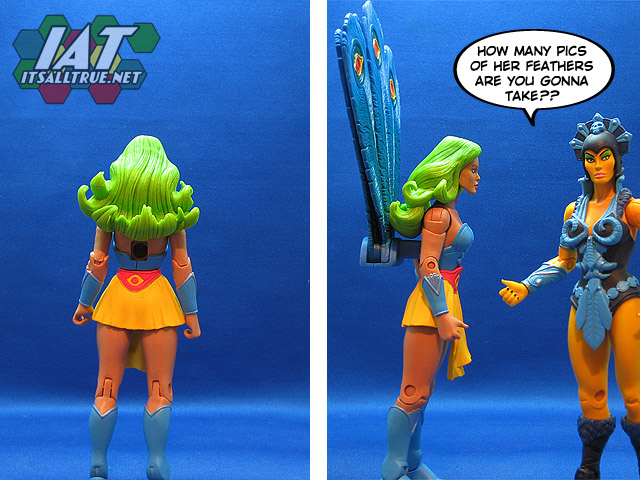 Of course the big part of the sculpt are the feathers. And while it’s kind of a big obnoxious piece for a toy line that’s a real shelf-crowder, it’s amazingly done. It’s got three separate pieces, one molded in place and two that are articulated allowing the whole plume to close or be fully spread. Each piece is it’s own unique sculpt and makes for an impressive 8” spread. The attachment, as tends to be the case for MOTU, is a little clunky and requires a big square peg to go into her back. Continue to Page 2…