“Now, look. This is gonna get weird, all right? It’s pretty freaky, but it’s safe. There’s no reason to be scared.” – Ant-Man, Marvel’s Ant-Man.

Okay, don’t freak out! We’re not doing a whole week of Ant-Man reviews again. I mean, I know y’all loved it based on the slowly tapering off traffic, but I do have one more Ant-Man figure to review since he didn’t quite make it in time for Ant-Man week. I was going to hold off for a while (speaking of, you guys want a Batman Week or a Bounty Hunter Week – or rather which one do you want first?), but now is the time to do this Marvel Select Ant-Man review. The regular version is hitting comic shops this Wednesday, so today is a good time to take a look at the exclusive version and decide if it’s worth picking up online versus hitting up the LCS on Wednesday. 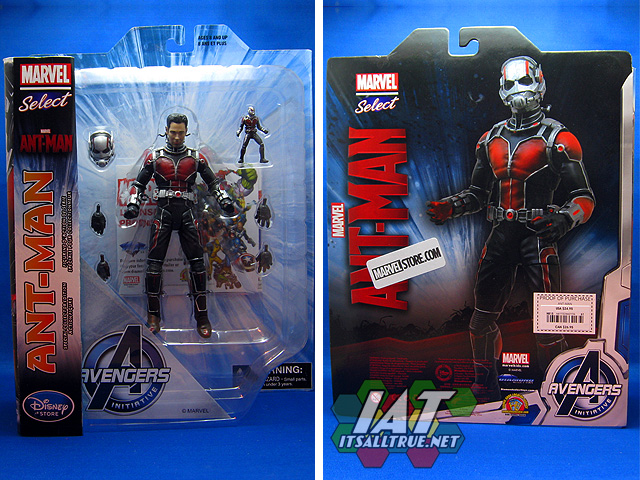 That said, this version is pretty much exactly the same. Exclusive online at Marvelshop.com & at Disney stores, this version of the Ant-Man figure is the only one to come with an unmasked head. I want to call it a Paul Rudd likeness, but it kinda depends on the angle with which you choose to look at it. I tried to find the best one for the pics below. So, it’s certainly not terrible, I’d say the biggest problem is that it is a little too long, so if you’ve been waiting for your chance to customize a Clueless Josh figure, this is probably close enough. It could be better, but it tried harder than some other likenesses we’ve seen on Marvel movie figures. 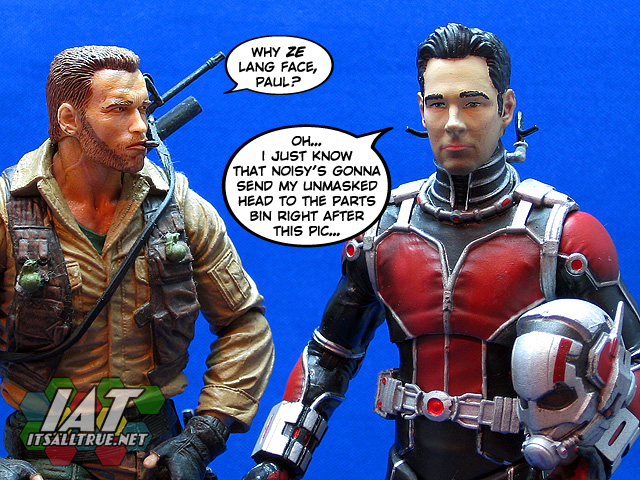 Since that’s the selling point for the exclusive, is it worth it? I think it depends on an individual’s level of collector sickness. It costs the same as the regular edition if you find it at the Disney store, or spend a few dollars extra shipping it from Marvel’s site. I went ahead and bought this one because my sickness is high and I’d feel like I was missing out on an accessory. Apparently, I don’t like it when my parts bin is short an accessory? It was also because I was able to get it early – this version has been available to order for a couple weeks (and remember I wanted it here in time for Ant-Man Week). 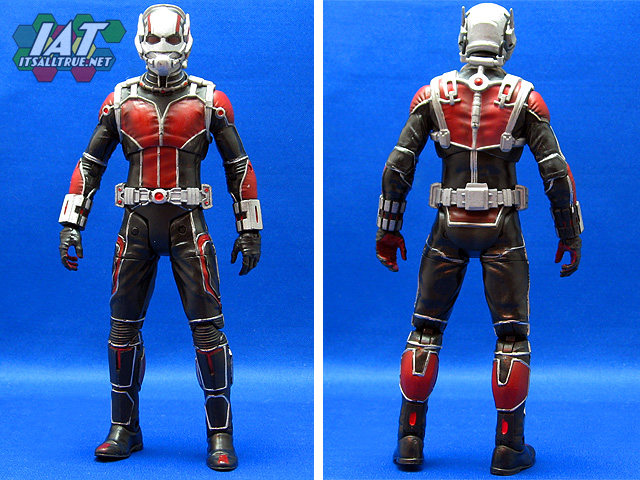 So after you pop the Ruddness off and add the helmet into the mix, the figure jumps from okay to amazeballs. As much as I commend Hasbro for working in so many of the costume details on their offerings, Marvel Select doesn’t pull any punches. A quick comparison of the two reveals just how many little bits Hasbro skipped with either sculpt or paint. I haven’t done a detailed comparison, but this figure makes me feel like if it’s on the movie prop, it’s here on the figure. It’s that solid. 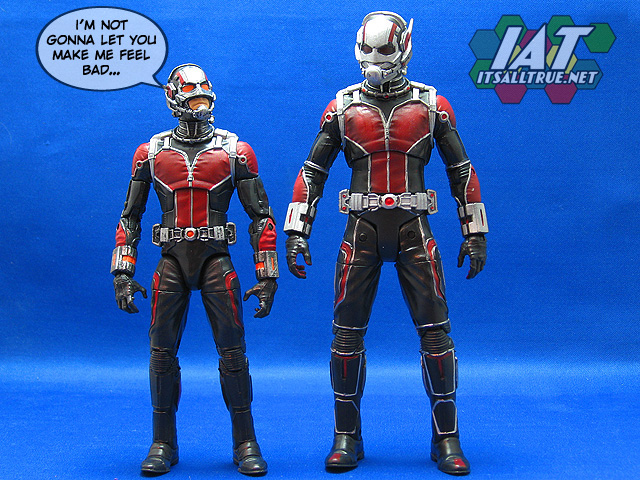 The paintwork does a good job of keeping up with those details too. Keeping in mind, that this is Marvel Select so there will be a little more slop and a little less resilience to chipping & flaking, the paint really set itself apart from the Legends figure. Just taking a look at both figures and you can see how much paint the Hasbro folks had to cut to get it under budget. Some paint choices aren’t the best though – the Rudd head is painted somewhat mortuary-like, but the real kicker is the lenses on the helmet. I thought it was odd of Hasbro to paint them that brighter orange, but seeing how the red lenses here make the suit look powered down, I totally get it! This figure just ends up looking a bit more inert due to the “eyes”. Continue to Page 2…