One of the cooler things that the Lego Group has been up to lately is acquiring the rights to work with different franchises. I love the traditional themes, but with some great sets coming out of the recent licensed products, I was stoked to hear that Lego had struck a deal with Disney to create product for the upcoming Prince of Persia film, Pixar’s Cars, and Toy Story. Toy Story Legos were the first sets from the deal to make it to retail stores and you can expect to see Lego-ized versions of Buzz, Woody, Jesse, and these little guys right here. 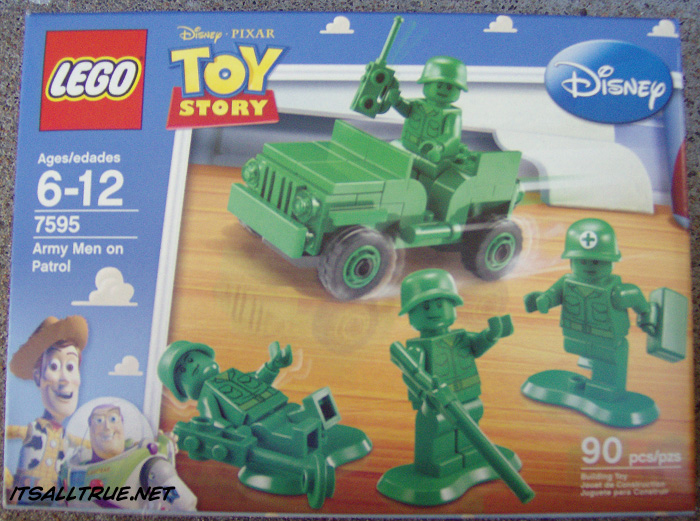 First off, I have to admit that when I saw the leaked pictures of 2010 products this was the licensed set I was the most excited about. Lego tends to shy away from modern military motifs, so doing a group of Army Men minifigures was a surprise for everyone. And that they looked to have executed it so well was icing on the cake.

Each box comes with four soldiers, plenty of weapons, a stretcher, and the parts to make a jeep all in that classic green ary men color. And at about twelve dollars a box, this makes for a classic army builder set. (And yes, I did make that bad pun on purpose.) 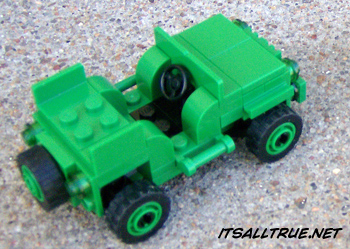 The four figures come with a nice array of accessories, giving them the opportunity to nearly replicate the old school army men that inspired them. The set includes two guns, two binoculars, two walkie-talkies, a medic case, a mine detector, a backpack, and a stretcher. Not to mention the four helmets, one with a medic’s cross, and their four bases. All the pieces, except for a couple of the jeep’s parts, are in the same color green, just like the old school army men, giving the impression they all came from the same sprue.

Now, as neat as this little set is, I was disappointed on a couple fronts. First, all the minifigures have the same facial expression. If it had the been traditional Lego smiles, I might not mind as much. But all four faces have this strange “eh” expression. It would have been better to get a little variety. Maybe a confident face, a concerned face, or even a scared face for the mine detector guy, because he knows his job sucks. Something else I would have liked to see is a green pistol along with the two rifles rifle. Pistols have already shown up in Lego’s Agents theme, so it wouldn’t have been hard to throw it into this set for one of the officers. 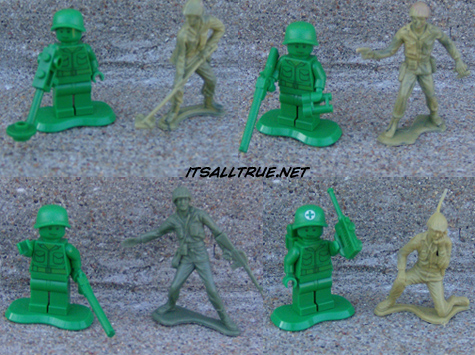 Despite those few minor annoyances, this set is great, and well worth the money. After I’ve caught up on the rest of the 2010 assault that’s pouring into retail, I can definitely see myself going back and grabbing a couple extra army men sets to pad the ranks.

This isn’t really part of the review, but I have one lament that this set does bring up. This is a shout out to Pixar about Toy Story 3 and to Lego should Pixar never do it. This set is amazing, but it is lacking it’s classic counterpart: tan soldiers. Currently, Lego has no reason to make a set of tan soldiers (and perhaps can’t) because Pixar hasn’t included them in the Toy Story films. I think Pixar should look into it. One, because of the hilarity that would ensue if Sarge and Co. were distracted by their mortal enemies and two, because I want Tan Army Men Legos. I bet most of the fans of this set would, it’s just wrong to have only the green ones. For now, I’ll have to let them fight some of the light brown Indiana Jones soldiers, but I hope Pixar and/or Lego will answer this call somewhere down the road.