I can’t buy LEGOs. They’re too much fun. They’re all interconnected. They’re addictive. I try to stay away because it becomes a money sinkhole. It’s best that I just stick to my guns: Don’t Buy LEGOs. But once the Ghostbusters 30th Anniversary set won its turn at LEGO Ideas (previously LEGO CUUSOO), it was a guaranteed purchase. I tried to play it cool. It didn’t work. The LEGO BTTF Delorean was an obvious companion piece. That was two. A few superhero sets snuck in. I couldn’t pass up Arctic LEGO Batman!). And then that set had this cool “block of ice” that you could lock up a character in. Well, that meant I needed Captain America! Hello, HYDRA Tank! It’s a problem. And it’s all this set’s fault. 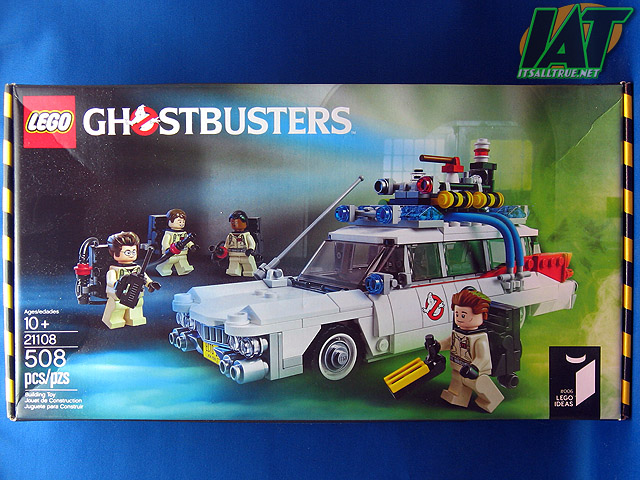 In 2008, LEGO teamed up with CUUSOO to create a path for consumer-created sets to be made into reality. Ideas would be submitted online and, after reaching a certain level of support, would be reviewed by LEGO for viability. Since then, eight sets have been selected that mostly fall into two camps. A heavy science theme (underwater submersibles, satellites, the Mars Rover, a trio of women scientists) or a licensed item (Minecraft, Back to the Future, & Ghostbusters). I didn’t really know about it until the Delorean being selected brought it to my attention, but it’s a fascinating process. And now one I’m happily following along now as I try to remember that I don’t need every set in the series.

The Ghostbusters set was the seventh selected, and sixth released, coming just last month. I ordered it directly from the LEGO website for $49.99.I was also able to pair it with the BTTF Delorean for free shipping (and a neat little balloon stand set). It was well worth it, even if it has turned into a temporary gateway to drug to more LEGOs. 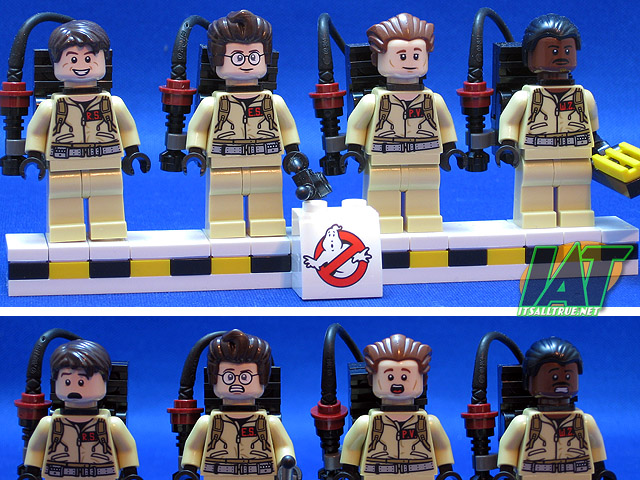 The set includes a sharply done Ecto-1 based on the first film and four Ghostbusters minifigures. I love the car most, but the minifigures are nicely done. I can see Bill Murray in Venkman and Harold Ramis in Spengler. The likenesses aren’t there for Ernie Hudson and Dan Aykroyd, but I like all four figures. The uniform tampos look sharp and I like the individual initials (subbing in for the too long names) giving each Ghostbuster a unique torso. Each head also has a second, scared face included which makes the whole set a ton more fun.

The only nitpick on the figures is one that’s endemic to LEGO ideas: no new pieces. Since fan submissions have to be built with existing pieces, they also have to get creative with their decisions. On the minifigures, this means some funky hair. Egon is strangely alright as a previously released LEGO man stole his hair and Ray works too; it’s Peter & Winston that just aren’t quite right. Peter’s hair just doesn’t exist in LEGOdom, but I would’ve made different choices to compensate. I think the hair given to Winston would serve Peter better and Winston would look best using the smooth, classic LEGO hair from years past. I need to dig around in my bin and find one to swap out. 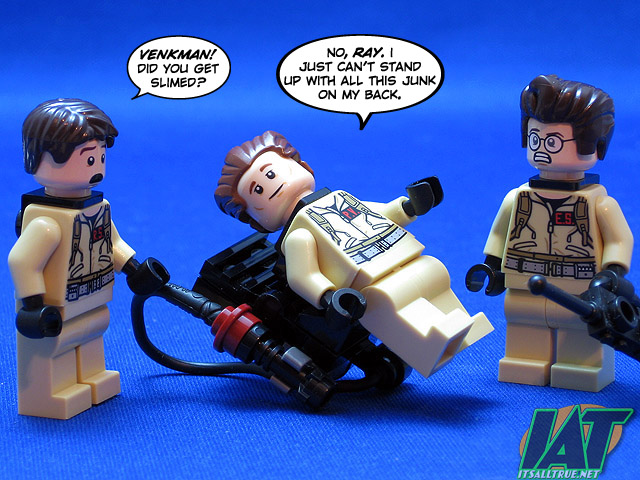 The Ghostbusters feature six accessories: their four proton packs, a ghost trap, and the classic LEGO walkie-talkie. These are sharp little creations using existing pieces, smart use of the LEGO whip, for example – but they’re heavy. If you want the guys to wear them, you need to have some plates on hand to lock the guys upright. The ghost trap is okay. I would’ve liked to see a thicker brick and a hazard sticker, but the flat pieces work well enough.

The real gem though is Ecto-1. It looks just as iconic and gorgeous comprised of LEGO bricks as it would in true miniature scale. Both the initial designer and the LEGO team that made it happen did amazing work. Building it was interesting, a lot of internal choices that reminded me of the old “Model Master” days and I loved every minute of it. From any angle I check, it looks great. The front grill, the rear “door”, the searchlight & the antenna, and especially all that curious gear that adorns the roof. Everything from the film looks to be properly LEGOized and the toy looks great for it. 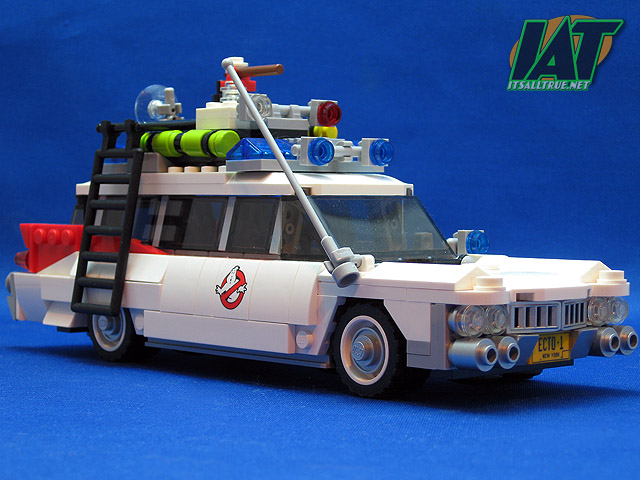 There is just one glaring issue: seating. To get the aesthetics right, there are no doors and the roof has to be removed to fit in three of the Ghostbusters. Yes, I said three. The vehicle is just a little too narrow to hold all four easily. This is a shame because I think, as good it looks, it might even look better wider, but it would be fine if it were just one more row of studs wide. As is, you can place Winston in the driver’s seat and Egon in the back with the display, and then there’s the 2×4 section between them. Technically, if you throw both Peter & Ray’s hands up the air (and use their screaming faces, may as well) you can get everybody in the car in a tight squeeze. 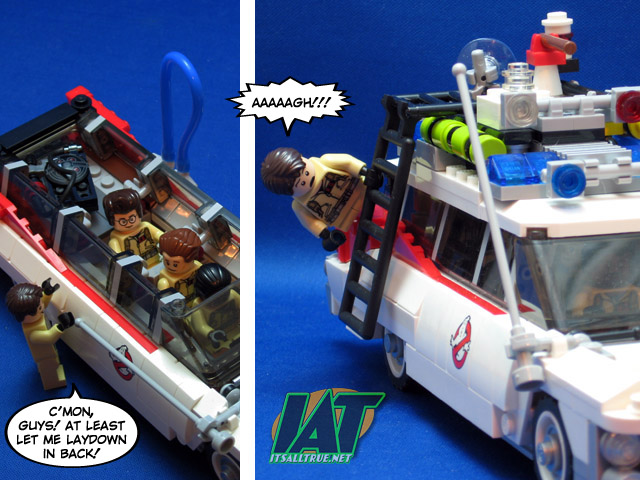 Overall, this is a fantastic set. I think it’s enjoyable for LEGO collectors that don’t know a whole lot about Ghostbusters and I think it’s amazing for Ghostbusters fans in general. You can tell a lot of care went into the set – most of the little drawbacks were things that can’t be helped like the need for reused hair pieces or the clunky nature of the proton packs, so I don’t really track those as big issues. LEGO did wisely include a stand you can build for the four guys too and it’s not shabby. For me, it was $50 to get a sweet Ecto-1 rolling around on my desk. It’s a fun piece to play with and I honestly am happy just staring at the logo tampoed on a LEGO brick. That’s cool on its own. The only sad thing is that LEGO doesn’t technically have the license full-time. I need to get some Ghosts in here!