When I decided to review the Predator 2 Trophy Wall from NECA yesterday, I thought it would be a quick n’ easy review. I would be getting home late and had to be at work early, it would be perfect! Or so I thought until I realized I was breaking two big toy blogging rules. First, never plan to review something you haven’t opened & inspected yet. And two, if you’re in a hurry, don’t review something that will make you picture crazy.

I’d been planning on picking up the Trophy Wall for awhile. As I’ve said previously, I’m not the biggest Alien/Predator fan in the world, but I enjoy the films and if a toy company is going to make really nice toys of a property I like… well, I’m generally screwed after that! This week, I happened to run across it in person at Hastings. I wasn’t really there to spend $60, but… I just couldn’t leave without it. I knew it was a cool piece; it was a good price, and damn was the box heavy. Perceived value, right there, friends. 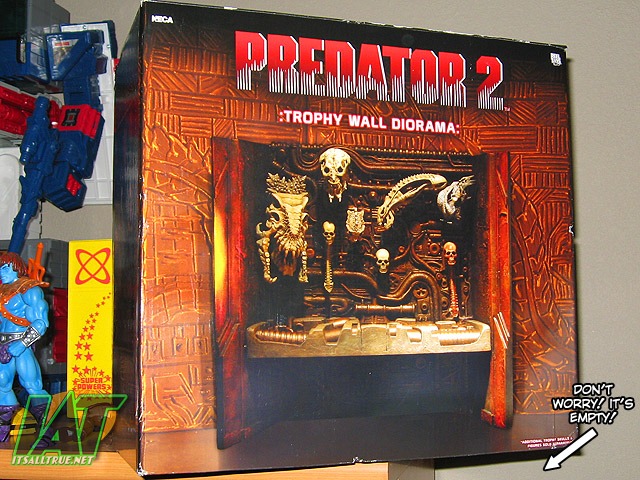 I brought it home and had to set it aside before I could open it. No biggie. When I opened it for the review last night though, I encountered my first major setback. BUSTED. For a second, I was similarly broken up. It turns out the heft of the piece comes from being a resin or a polystone and a little more fragile than I was expecting. It was a good reminder that this is more display piece than toy and that I will need to keep the box for transport should the need arise.

The piece was well-packed in Styrofoam & cardboard. I’m not sure how it managed to break in there, but things tend to find a way. And, if you’ve ever been to a Hastings, you know they tend to have more product than shelf space.

Well, I’m not the type that gets bent of whack over this sorta thing. Usually, if something’s broken, I’ll just return it and get another. That wasn’t possible here as there wasn’t a replacement. Luckily though, the plastic bag inside the Styrofoam, inside the cardboard, was intact and the big chunk that had broken off as well as some smaller pieces were all still present. Somebody get some superglue! STAT!

Now that I was almost good as new (there is a visible seam on the backside, but it looks great from the front!) it was time to put things together. Out of the box, it’s mostly ready, but nine plastic “skull holders” have to be attached. It’s pretty straightforward, most of the posts are individually sized to specific ports, but you can refer to the packaging if you’re not sure. I did have a couple little oddities – two of the pegs had attachments on the ends that had to be removed so the pegs would fit. I think they were duplicates of the holders embedded in the wall, but I’m not sure why they were there. Once I figured out to pull them off, everything went pretty smoothly. 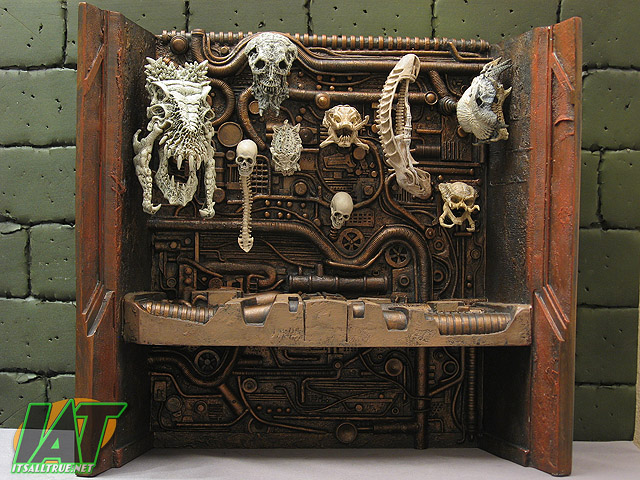 Once it’s all together, even before the skulls are added, the piece is stunning. The material used is able to capture a tremendous level of detail. Its nuts. Thing is, I can’t really compare it to the movie because we don’t get to see the wall up close or even for very long in the film, but this feels like a faithful adaptation. The sculpt verges on fantastic if I had to just use one word. Nearly everywhere you look, there is some slight detail. On top of that sculpt are some terrific paint applications. There’s not a level of intricacy so much as a as just a mix of the right hues and washes to give everything a very high-end, realistic feel. 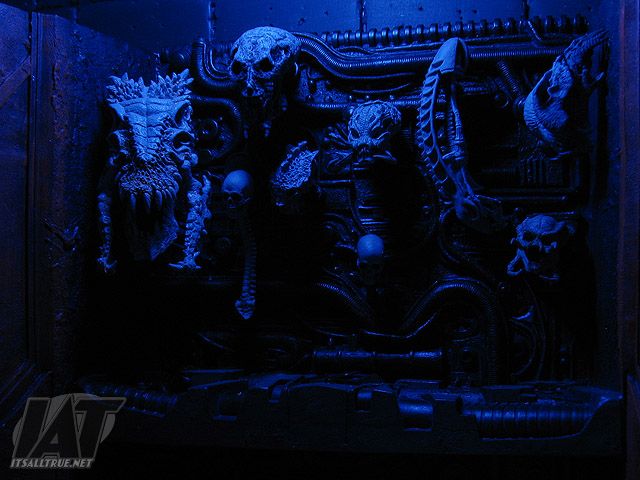 The other impressive thing is the size. The wall is nearly 11” tall, 11.5” wide, and over 4” deep. If you pick up this piece, be prepared to give it some room. It seems silly to just break this thing down by measurements. It’s one of those rare pieces that are just difficult to describe. That’s probably why there are twenty pictures in the gallery on the next page. Continue to Page 2…