Powercon 2012 kicked off yesterday in Los Angeles and Mattel wasted no time; their Mattycollector panel was first thing Saturday morning. We’d been told there might not be much to see, but Toy Guru teased a huge announcement. Well, there weren’t many reveals, but huge just about covers it…

The news coming out of the con started off small with the reveal of the “secret accessory” for PowerCon attendees. There was a lot of speculation about the piece, described as a “happy accident” by Toy Guru. Well, it turns out that happy accident wasn’t as cool as some thought – it is merely the two-halves of Keldor’s swords (from next month’s Weapons Pak) mistakenly fused together by the factory. Now, I can’t knock a freebie… and I certainly can’t knock one like this where anyone who buys a Weapons Pak and knows how to use glue can recreate it, but that perchance to dream of something cool? That wasn’t necessary. If this opportunity ever arises again, let’s hope Mattel will just be specific about what’s being given away.

Not too long after word of the accessory leaked out, things kicked into overdrive when the Mattel panel started. There were three new figures revealed. Mattel, doing it’s best job to scoop the news also made these reveals via e-mail to subscribers: 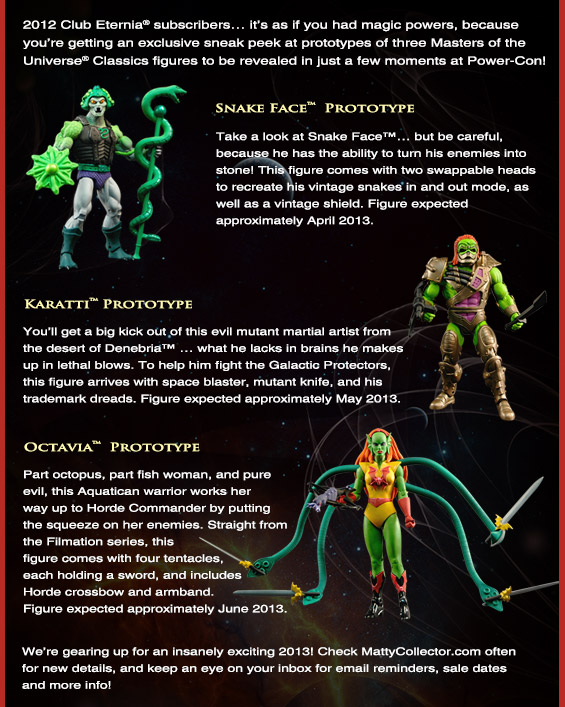 Looking across though, it’s difficult picking the order of coolness. I think Karatti has me most excited, but Snake Face shows promise (and I’m happy for the two heads). Octavia’s colors really call out to me, but the lack of bendy tentacles – though they do appear ball-jointed at the base – does hurt somewhat. SCB (from He-Man.Org) has some great pics of Snake Face in this post. SCB also mentions that the staff may get cut, so if you want it, say so. It’s the Hssss staff, so it can hopefully be included in a future weapons pak if not here.

Some other good tidbits rolled out as well including Geldor announced as the November figure after winning the Fan’s Choice slot (we should see him at SDCC). The other cool thing was the faction sticker for King He-Man (pictured at right). I know we have to get Extendar, Sweet Bee, Hydron, [INSERT YOUR “OMG HOW CAN THEY NOT MAKE MY FAVORITE” HERE], but the prospect of only seeing this faction sticker once is killing me. I’d love to see more from this era, possibly more than I care to see a Vintage/Filmation/POP/NA figure or three. Naturally, I’ve already read some of the same old party poopers who hope they never see this sticker again. Sad day, right?

There was one bit of bummer news – Frosta, the figure that feels like it’s been nothing but trouble since it debuted, does indeed have unintentionally reversed forearms. At the con, Mattel announced that she would be returnable with full refunds, but reminded collectors there are no future plans for putting a corrected versions into production. It’s reported that Mattel will do a free gift for sub holders to make up for this error. I’d speculate on what it should be, but the possibility that it could just be two other accessories glued together looms.

That should be about it… wait, were you waiting for me to mention something else… a certain iconic 80s playset perhaps?

Even if you were disappointed by the accessory, even if the three reveals weren’t your cup of tea, even if you’ve become so jaded that you’re convinced Castle Grayskull will be molded in black plastic with chipped in the package paint, misassembled, and crack like the Goddesses’ hip when you touch it, I hope that for at least the five seconds before all that kicked in, I hope that your 5yr old self, got a satisfying “woah” at the mere prospect of it. 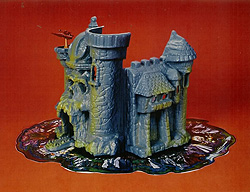 My ‘woah’ is going to carry me for awhile, but I’ll be the first to admit that it’s going to be an uphill struggle. This fall, MOTU collectors will be asked to pre-order the Castle for $200 sight unseen. A drawn mock-up and a list of planned details at Oct’s NYCC will be all we have to go on. Honestly, I’m not too worried about that part. A Four Horsemen creation based on Mark Taylor’s design (pictured at left) with fans getting a look at the “B Sheet” (cue the criticisms and suggestions) before anything is started? That all adds up to a pretty safe bet for awesomeness.

The part that doesn’t is that Mattel will need thousands of people to pre-order this toy. That means a thermometer. That means bellyaching, cajoling, in-fighting, and every other bad aspect of toy collecting lumped in to the sign-up period and laid at the feet of this new castle. I hope there’s enough collectors out there that want it, that can afford it, that can make it happen – because if we do, then that shitstorm will surely be worth it.

Obviously, I’m in. I’ve got an envelope ready; Castle Grayskull scrawled across the front. There’s $15 already in it, and they’ll be $15 added to it next month and the month after. I’m expecting that Mattel won’t charge for the castle until it’s ready (just as they’re doing for the BTTF Hoverboard, I’ve got that envelope in my desk too). That means we’ve got 13-14 months before we’re going to have to pay for the Castle and that $15 a month will cover any of us that discipline to keep up with it.

For the news as it rolled out, the panel slides, and pictures from the show, choose your favorite Powercon attending site: He-Man.Org, Action Figure Insider, Fwoosh, or ToyNewsI.

The second and final day of Powercon gave us two more tidbits. As expected, a teaser for the next reveal was placed in the booth today, but there was another oddity in the display case. Head over to this post on the Fwoosh to see the unhelmeted Zodak head (the one that comes with Strobo) sitting proudly atop a Zodak figure. We knew about that already, yes, but check out what’s in his left hand. A Zodak helmet! I hope this isn’t a tease or just something for the display case. I need that! I suppose I can dremel one out myself, but I’d rather Mattel just include one.

Anyway, so the tease. That can be seen in this post at He-Man.Org. It appears Clamp Champ will soon be destined for our shelves! I’m stoked for this figure, but the staction made me forget he was really “Pincer” Champ. Doh!