Now onto the primary reason I picked up this two-pack: Gambit. I don’t want to be too harsh on the figure because, with a Wolverine: Origin base figure, I knew what I was getting, but I’m still a little bit disappointed. 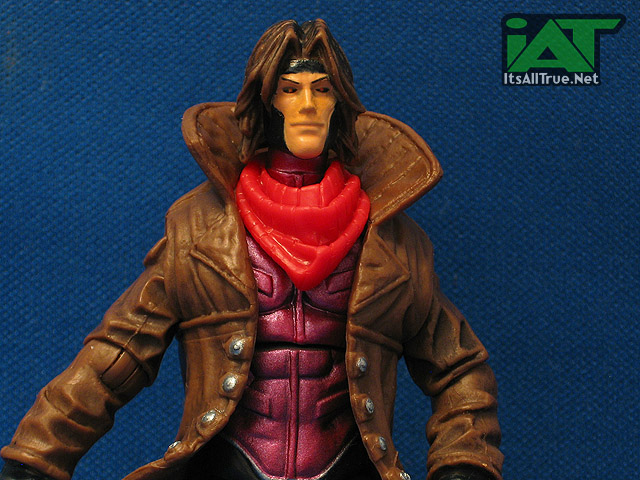 First, the good: the sculpt. There’s no real buck use here. Gambit’s W:O body features all-new pieces that are character specific and the figure looks great. The coat, jumpsuit, and boots are all nicely done. The trench coat flaring out takes a bit of getting used to in a static pose, but this way works better than if it was simply draped over the figure and blocking the leg articulation.

The two new pieces, the new head sculpt and the scarf, actually make Gambit less “90s” than the original figure, but this head sculpt is superior to the original so you won’t get any complaints from me. The paint on the figure is pretty sharp other than the face being a little gloopy. 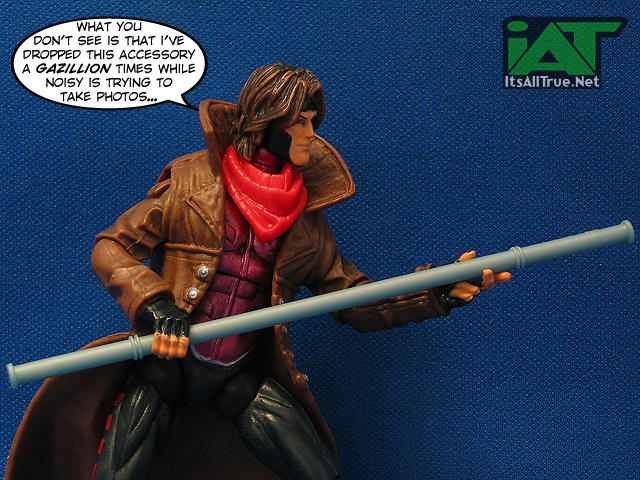 Where Gambit completely falls apart for me is the articulation. Again, this is the articulation I knew he was going to have, but I was hoping I’d be able to tolerate it more than I do. There are ball-joints at the head, shoulders, elbows, and hips, the mid-torso joint, thigh swivels, and double-hinged knees. The lack of ankles is always a disappointment this many years into action figure collecting, but the real frustration is the arms. Those ball-jointed shoulders and elbows? Those are great, but that’s all there is. Gambit includes his bo, but it’s a pain to pose him with it because the lack of wrist swivels (or even ball-joints) mean that there’s a very limited amount of poseability where Gambit can hold the bow with both hands. It drives me a little more nuts than I thought it would. If Hasbro could’ve spent a little more here for Gambit to get some better articulation, it would’ve gone a long way. 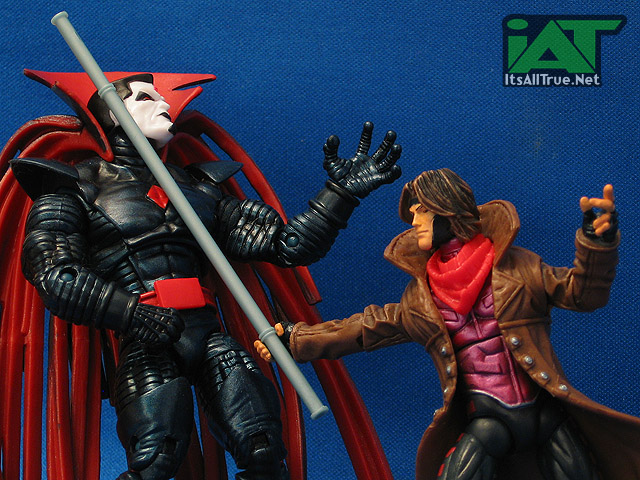 Overall, I’m not as thrilled with this two-pack as I was the Thanos & Adam Warlock 2pk. In that pack, Hasbro put some great work into Adam Warlock, made Thanos totally worth buying twice, and included the cool, clip-on Infinity Gauntlet. This 2pk? Not so much. The Mr. Sinister figure is nice, but I can’t completely back it knowing that he’s a decent amount out-of-scale. I do think he’s a lot of fun though. Gambit did get a fantastic new head sculpt, but some problems with the previous figure went unaddressed and I find myself more or less back where I started, wishing I had a great Gambit figure to mix into my MU shelf.

For more Marvel Reviews, check out our Review Index.