Zatanna has been a favorite of mine since I was a wee tot. Her origin is one of the first things I ever read. And I don’t mean comics, I mean out of everything. As a toy collector, a good Zatanna has been a long unfulfilled wish – she’s been cursed with bad figure after worse figure. I had my fingers crossed for this one.

Zatanna first appeared in Hawkman #4 way back in 1964, but I first read about her in DC Special Blue Ribbon Digest #5. I bring that up because that short story in the digest is her origin – explaining the events leading up to that appearance in Hawkman. The origin story spends more time on her father – the Golden Age’s John Zatara, but we get the basics – she’s an established stage magician, we see her manor Shadowcrest, and watch as she learns from her missing father’s diary that she can cast spells by reciting them backwards. Armed with that knowledge, she sets off to find her missing father in Hawkman #4 and continues on through a handful of other DC titles. 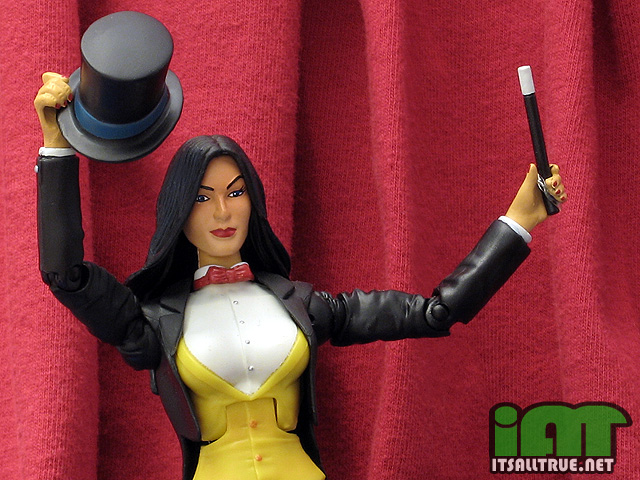 Zatanna went through sporadic use after she found her father in JLoA #51, appearing as a backup to Supergirl or guest-starring here and there. She ultimately ended up joining the JLA (thanks to reader’s votes) in JLoA #161 and stayed with the team until it disbanded at #257. Afterwards there was another long dry spell of guest star appearances, cameos, switching between DC & Vertigo, and forgettable costume changes. In the last few years, she’s appeared more and more in stories I wish I hadn’t read. The least of which was Identity Crisis, where she was shown mindwiping folks to restructure their memories and/or personality. What followed was the term “mindwipe” being used in nearly every single appearance for the next few years (thank you, Brad Meltzer). She finally received her first ongoing solo title from DC Comics earlier this year and thankfully mindwipe isn’t said in every issue… 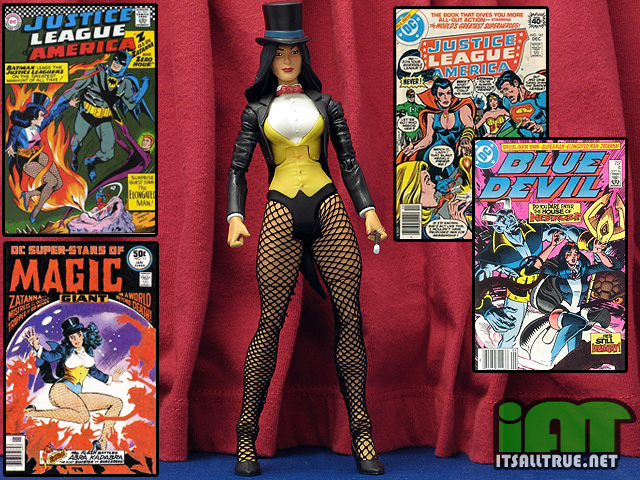 In the picture above, I’ve added a variety of Zatanna covers denoting her costume changes over the years. I’ve liked all of them in their own way, but her magician outfit is arguably her most iconic (though Mattel must make a figure in that blue/white Perez costume on the lower right). The magician’s outfit has undergone minor changes though. There’s the whole blue/black nonsense for the tuxedo, while the vest and bowtie have been white, yellow, blue, red, etc, and don’t even get me started on the shoes). Anyway, I’m pretty happy with the design choices the 4H made. The yellow vest looked odd to me at first because it’s typically paired with the “blue” tuxedo, but it’s grown on me. It’s how she looked on the cover to that DC Special Blue Ribbon Digest all those years ago and when Mattel gets to Zatara (you’ve got that Joker buck handy, Toy Guru) she’ll look great paired with him. 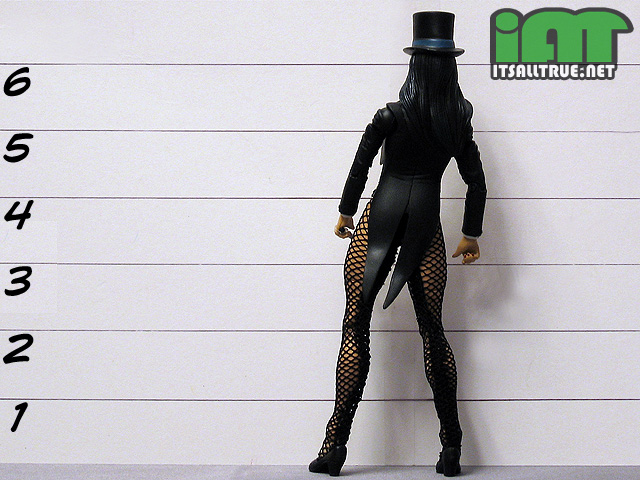 Zatanna is mostly new if not all-new (she might steal a piece or two from Black Canary here or there) and there’s a lot to like in the sculpt department. Her upper torso details are sculpted in, her bowtie is a separate piece for added depth, the arms are a bit thicker and seem longer than your average DCUC female figure, the softer plastic coat covers up some of the overly thin DCUC female frame, and the head and hair sculpts look great. Now, Zatanna’s been cursed with a couple horrors from DC Direct, but Mattel looks to have done a bang-up job right out of the gate.

There are a couple issues though. First, the fishnets. I don’t mind the use of real fishnets, but I know that Mattel can do them without the unsightly seam up the back. They also used too much material which leads to a lot of bunched up fabric. I’ve seen some fans try to push the excess up past the hip joint, but I want to try Xavion’s tutorial at the Fwoosh. It’s a quick tutorial on how to remove the shoes and trim the excess material. When I find time, I’ll update here to let you know how it turned out. The second problem is best seen in the picture above. My Zatanna (and many I’ve seen online) leans really far back and to her right. Looking at the jacket, that has to be by design, but man it looks weird. 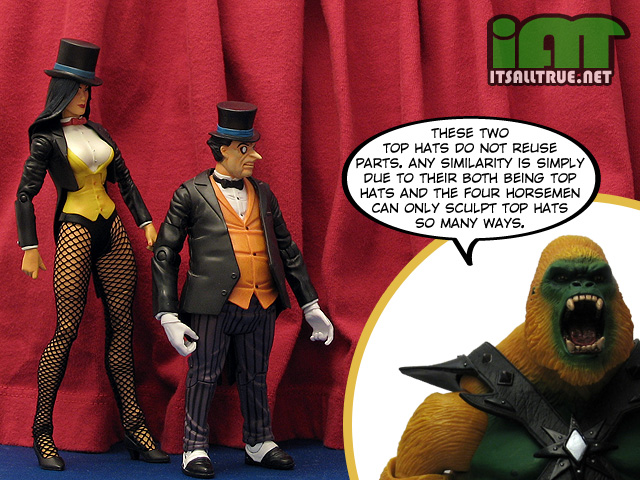 Zatanna’s paint isn’t too bad, but it could be better. Most things are molded in the appropriate colors and required little paint, but on pretty much all the Z’s I’ve seen, the white shirt rarely gets to edge of the vest. It’s right in the middle of the torso and it’s hard not to notice. Luckily, I found one where the lines were mostly straight even though they weren’t flush to the edges. This was really the only QC issue I had on this figure. I’ve seen reports of stuck joints, but I didn’t find a single one with my wave fourteen (knock on wood).

Articulation is a bit of a miss for Zatanna. We all knew that the fishnets meant the hip articulation was gone (even though it doesn’t have to be), but the waist articulation is also removed (it should be there as those are two pieces, but my figure will not budge) and, of course, the hair blocks the neck articulation. She’s also a figure that would’ve greatly benefitted from ball wrists. The rest of the articulation is there though – ball joints at the neck (limited) and shoulders, hinges at the elbows, hips, knees, and ankles, swivels at the biceps and wrists, and the ab-crunch.

Since she can hold her hat, I’m including it as an accessory. It fits on Z’s head surprisingly well and she can hold out decently enough (this is where those ball wrists come in – “extra articulation for those that need it” remember? Y’know, like stage magicians?). Since her hand is molded to hold the rim of her hat, she can also hold the playing cards included with Joker, so that’s a cool bonus. Her wand is soft and came bent to the shape of her hand – you’ll notice the clear packaging rubber bands on her left hand in all of the pictures. I’m told she can hold her wand without them, but I’m fine leaving them on so I don’t lose it. 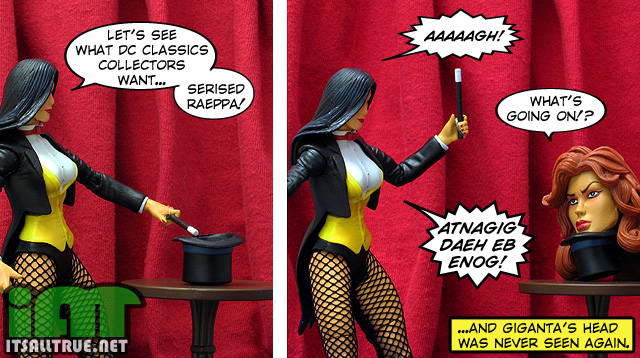 Overall, Zatanna is a decent figure for the line – definitely one of the better female figures we’ve seen. The sculpt is nicely done and I’m okay with the real fishnets, but Mattel could’ve done a better job in planning for and executing them. That and some slightly better paintwork would have knocked the figure out of the park. Basically, there’s one or two changes I would’ve made if I could, but Mattel finally gave collectors a Zatanna figure that we don’t have to be embarrassed about owning (I’m looking at you DC Direct).

While Zatanna ends our Wave 14 reviews (which were somewhat mixed in with our Wave 15 reviews), there’s no rest for this reviewer. While I was working on this article, the UPS man dropped off this box at my doorstep. Look for those reviews to begin in a few days…