I admit it. We forgot that we didn’t finish up our wave elevens reviews. It’s been known to happen a time or two. But, we have it today, our fifth and final wave eleven review… the Question, Deadman, and uh, Deadman (sorta). You’ll see what we mean… 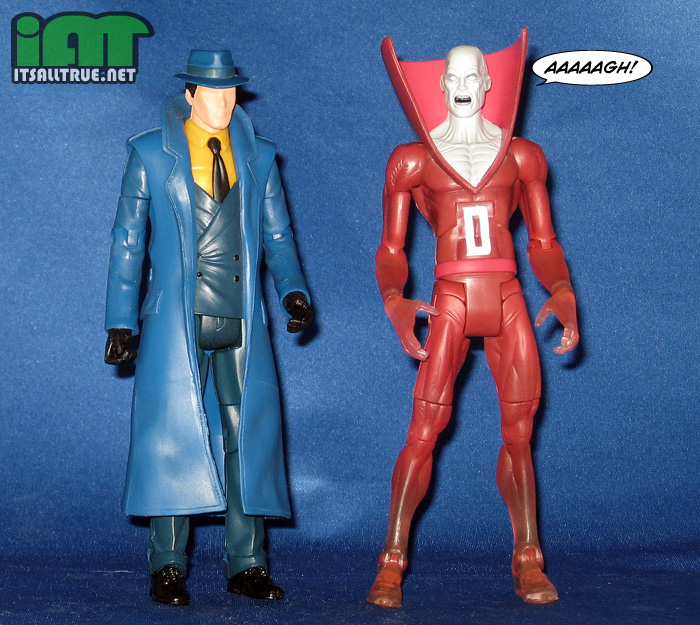 I’m not sure what tier I’d put these two characters in. Both characters have been around for awhile (both were created in 1967), but only Deadman has been with DC that whole time. Deadman was created by Arnold Drake (co-creator of the Doom Patrol) and Carmine Infantino (co-creator of the Silver Age Flash), but he became most popular under the direction of Jack Miller and Neal Adams in the seventies. Despite being the product of those comic heavyweights, Deadman has worked best as a supporting character throughout his publication history. Mostly, he’s limited by his back story and powers. In life he was Boston Brand, a trapeze artist who performed as “the Deadman” that was killed in the middle of his act. His spirit lives on thanks to a fictional Hindu Goddess that gives him the ability to take control of the living. Basically, he has to be someone else in order to interact with other characters or accomplish much of anything; otherwise he’s intangible and invisible. He’s always been one of the characters I like to follow, so I’m happy to get a figure of him that’s in-scale (the DC Direct version was a giant).

The Question was a Charlton Comics character for the first sixteen years of his publication. He was created by the legendary Steve Ditko (think Spider-Man). Originally, the Question was an investigative journalist with a bit of a ruthless streak that solved crimes as a superhero and then reported on them in his secret identity, Vic Sage. When DC comics acquired Charlton characters, they were going to use the lot for the Watchmen series but changed their minds and added them to the DC Universe instead. Alan Moore went on to create Rorschach in the Question’s image. Meanwhile, the Question was given a spot in the DC universe proper (and a trench coat!) by Denny O’Neil and Denys Cowan. He remained active in the DCU until “52” where Renee Montoya became the new Question. Technically though, this figure isn’t either of those versions. The look for this figure seems to be at least partially inspired by his recent JLU appearances where he was given a paranoid flair and quirky personality. The JLU colors look great on the final figure though, so I can’t complain too much. Also, I think this is a first in the history of DC Classics reviews – two all-new sculpted bodies in one review. Yeah, we didn’t believe it at first either. 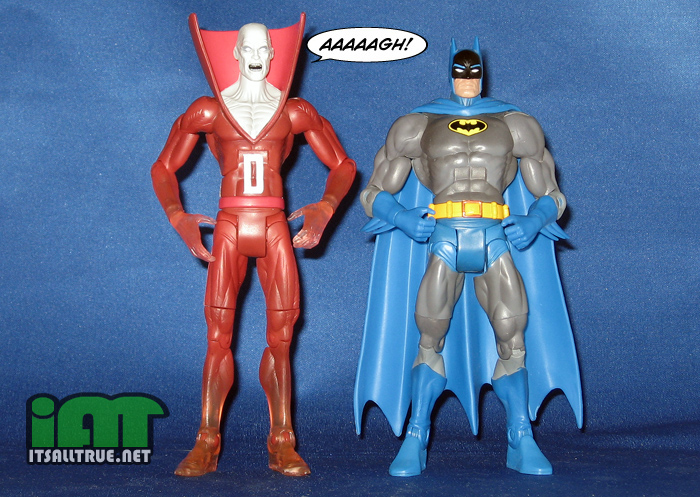 Deadman introduces a leaner, lankier buck into the line. There’s also a ton of detail here – he’s got wrinkles, striations, and pock marks all over. The gloves and booties have molded ridges, but they’re unpainted on the phasing variant. I don’t like the oversized hands – I’m not sure if it’s on purpose or not – but they do give him a ghastly reach in some poses. The best work is done on the upper torso and head where his skin is exposed. The large collar is a separate piece that fits into holes along the torso. The detail work on the atrophied muscles inside the collar is excellent. Now, I’m not a big fan of screaming heads – and I do pick on it in pretty much all the photos – but it works here. The phasing variant ends up being one scary dude.

Articulation for this buck is what we expect from the line, right up to the limited head articulation. Mattel says this has been fixed for Wave 12, but the handful of wave twelve reviews don’t seem to support that claim.

The paint work on Deadman is very good. He’s cast in red with his lower extremities cast clear and then painted to match as they fade in. The paint on his eyes, teeth, and symbol is glow-in-the-dark which can make for a creepy effect if he’s got a good charge when you turn out the lights.

We poured over the Question looking for reused parts and we did find something interesting. I think at some point, he shared some parts with the Movie Masters Harvey Dent. The final products are in different scales, of course, but they could have been the same size at one point. The legs are the best example. They match up above the knee pretty well. Below the knee is a little different, the legs are switched. The left leg on Harvey closely matches the right leg on the Question and vice versa.

The details are nice on the suit, especially the trench coat, but the front of the suit is way too low – follow the angles of the jacket and you’ll see it’s not right. I think this is partially due to it being sculpted as a separate piece on the prototype. The 4H mention here that this front piece had slid down while they were at Wizard World Philadelphia and I’m wondering if the same thing happened when the tool was created for the final product (where it’s molded as one piece with the trench coat). It’s a minor nitpick, but it can bother you a lot if you let it. 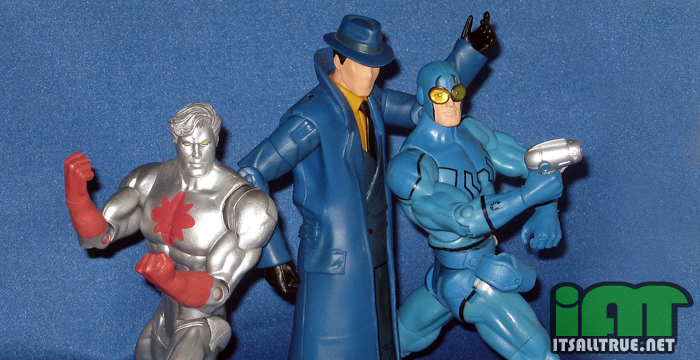 The highlight here is the head (though the articulation is again blocked). The 4H did a great job of capturing the faceless one’s subtle angles and giving the Question is featureless visage. It works especially well under low light when shadows can play across it just like they do in the comics. All the articulation is here though some of its blocked by the trench coat. The ab-crunch is basically useless and the legs can’t do much other than to let him stand up and maybe crouch.

Like, Deadman, the question didn’t require that many paint apps, but what’s there is good and gives the figure the sharp contrasting blues & yellows of his JLU incarnation. 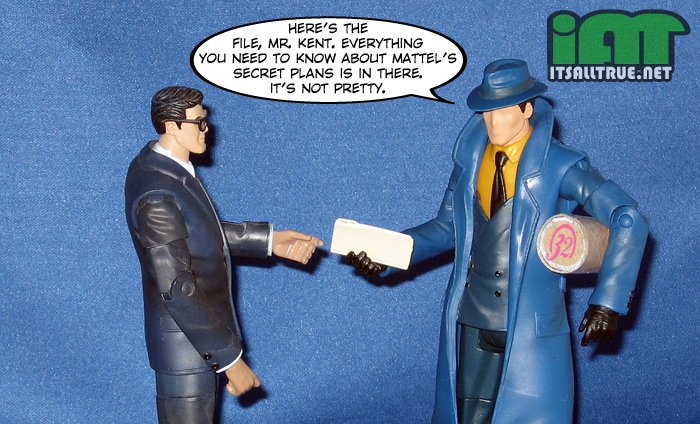 Accessories. We know that, other than a few figures, they don’t really exist in the DC Classics line. Heck, most figures couldn’t hold them if they had them. Still, at $15, it’s even worse that they come with so little. Now, Deadman doesn’t have any accessories that would be obvious. If he were intended for kids, some type of cover/clip-on armor to show who he’s possessing would be nice, but that’s probably silly for an’ adult collectible’. The Question is a different story. I would’ve liked to at least see him come with the old Clark Kent file folder (he can hold it perfectly) or, to really finish off the JLU homage, a simple cylinder could work for the 32nd flavor of ice cream he discovered in the cartoon. Mattel even made a mock-up of one for their JLU Question advertisement. 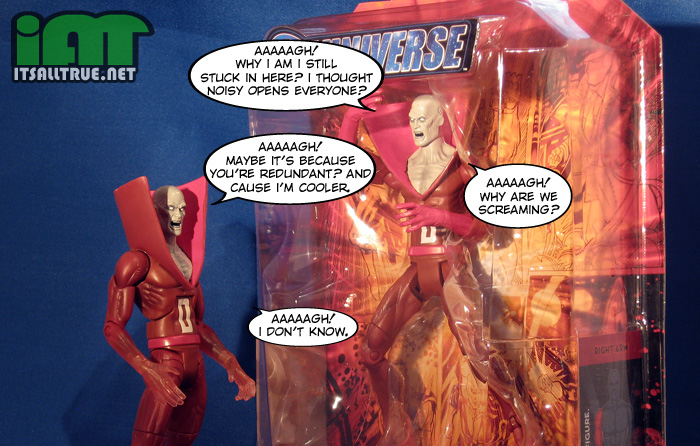 I haven’t opened the variant. I don’t know if I need it or not. I have all the variants so far, even the stinkers like helmetless Barda. I’m not fond of the bright reds on the regular Deadman – and looking ahead I don’t need both Spectres or that equally lame unwrapped head Negative Man. So, at $15, I’m starting to think it’s time for me and my completist self to part ways. If the variants are separate characters, like the two Cheetahs, or two important designs, like the two Sinestros, that’s one thing. But the 70/30 variants have been lame of late and they may not be right for my collection anymore. I’ll let you know my thoughts as we get through the next few announcements.

Overall, I like these two figures. Both have some issues like the giant hands and limited articulation, but they’re both important pieces in a complete DC Universe and are great additions to this quickly growing collection. I’m looking forward to Spectre (& hopefully Phantom Stranger) to flesh out a mystics area for Deadman to be displayed in. Similarly, I hope Mattel won’t wait too long on Peacemaker, Nightshade, & Judomaster to round out the rest of the Charlton characters they have access to.

38 thoughts on “ItsAllTrueReview: DC Classics – A Question and Two Deadmen”