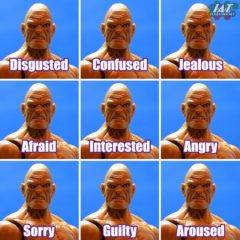 So three days ago I started this review with the setence “The universe has been fighting my success this week.” There had been some… unplanned events, big stress at work, and then the site went down. And stayed down. For three days. All the gobbedlygook is fixed up now. I guess I just wasn’t meant to get 8 reviews done in 5 days! But alas, we’re still making it in the calendar week, at least if you figure the week starts on Mondays. On to the Absorbing Man…

Hasbro got in on the action in their Fin Fang Foom line. He wasn’t impossible, but Hasbro hadn’t quite figured it out yet. I liked his brick leg, but not much else about that figure. So I waited and waited – seriously being a fan of Thor villains is akin to liking girl characters. The toy companies don’t always have your back. Luckily, Hasbro has been on fire with the ladies & with the Thor big bads. I mean, I’m still waiting on Loki, Enchantress, Grey Gargoyle, Mr. Hyde… you get the idea, but an upswing is an upswing. And, 51 years after he debuted, Absorbing Man has a great figure, even if he’s a Spider-Man BAF.

The first thing you might notice about ol’ Crusher Creel is his size. Yes, Hasbro has decided to upscale Thor’s whole life. His figures are huge. His villains are huge. Valkyrie was huge. It’s just a thing, Asgardians are now seven and a half feet tall and if a human has to fight them, they’re apparent seven and a half feet tall too. At least that’s true for the Wrecking Crew & Absorbing Man; poor Radioactive Man got the short end of the stick there. The good news for Crusher is that he can totally be this big. He could be as big or you or I if he touched something massive enough and absorbed its properties. So making him big enough to go toe-to-toe with the giant Thor’s we’ve been getting? Perfect.

I don’t know the specifics here on the reuse, but I’m guessing some Terrax parts are at play based on the size and the old ball-jointed hip design. Everything works fine even if the old hips are giving me Toy Biz flashbacks. The buck body has some new bits like the belt, the lower pant legs, and prison issue boots to finish off his iconic look just fine. He is missing nipples, but we won’t hold that against him, or hold anything against him for that matter. That’s how trouble starts.

Up top is of course his new noggin’. I love & hate it. I’ve always thought his uneven cone head was weird, so I don’t like it, but the toy absolutely nails it and I love that. His face sculpt is spot on to me too. I mean, he looks like he’s seen something really disconcerting and he just doesn’t know what to make of it, but that makes sense given the character. Continue to Page 2…