Totally unrelated to Exhaust, but I was reading up on my Wheeljack review to refresh my thoughts on the mold, transformations, etc. for this figure, a repaint of Wheeljack. I had totally forgotten that I wrote my Wheeljack review while I was in the hospital. Well my wife was *in* the hospitable after having given birth to our first son, Sam. I was just there because they tend to let the Dad hang around for moral support. Anyway, that was a year and a few weeks ago. That blows my mind. Time flies! 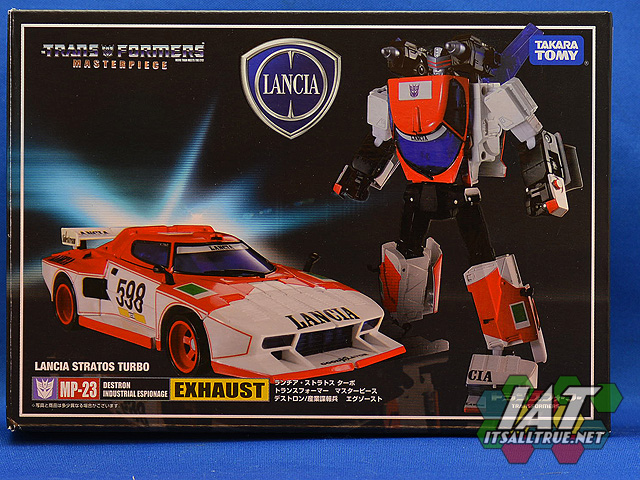 As for Exhaust, there was a time that I was pretty positive I’d never own this figure. The original Diaclone car was based on the Lancia Stratos Turbo. If you google that race car, you see two decos right away. One featuring Alitalia and one featuring Marlboro. Diaclone made both into toys. Hasbro turned the Alitalia car into Wheeljack. They left the cigarette car well enough alone for one reason or another.

Thirty years later, when Takara was looking to get some mold reuse out of Wheeljack, the Marlboro deco was an easy alternative. It would just need a new head, which Takara took the opportunity to make a new character, Exhaust, and add a Decepticon to the Masterpiece ranks. At least they thought it would be an easy alternative. 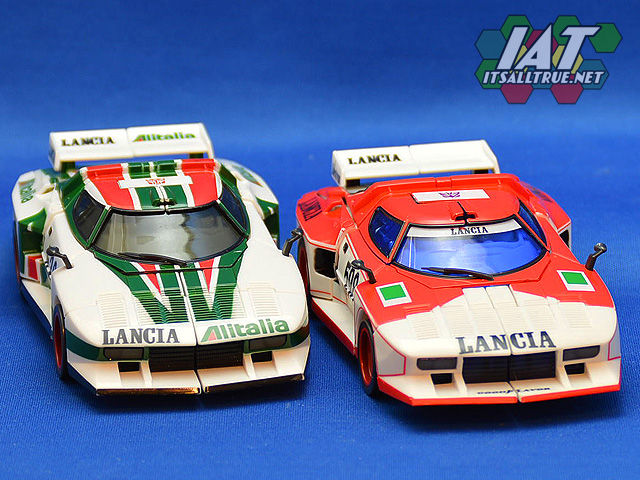 Enter Phillip Morris USA. The obvious thing is that using Marlboro logos would be rights infringement (the Diaclone got crafty with a Marlboor logo), but in reality it’s that toys can’t be construed to advertise cigarettes in any way. And while I may be in my thirties and you may be in your thirties, Exhaust is still… a toy. US Retailers couldn’t legally sell it and Phillip Morris even tried to force the issue overseas. For a while it looked like Exhaust wouldn’t come out at all.

TakaraTomy dealt with all this by making slight changes to the deco, making Exhaust look slightly less like a pack of cigarettes (& I do mean slightly). So there was hope! Still though, I missed the pre-order windows, US retailers wouldn’t carry him, the second-hand prices were dumb, and I again figured I just wasn’t going to get Exhaust. Then, I happened to catch Anime-Export at the right time to get a sweet deal on the reissue and, well, here we are! 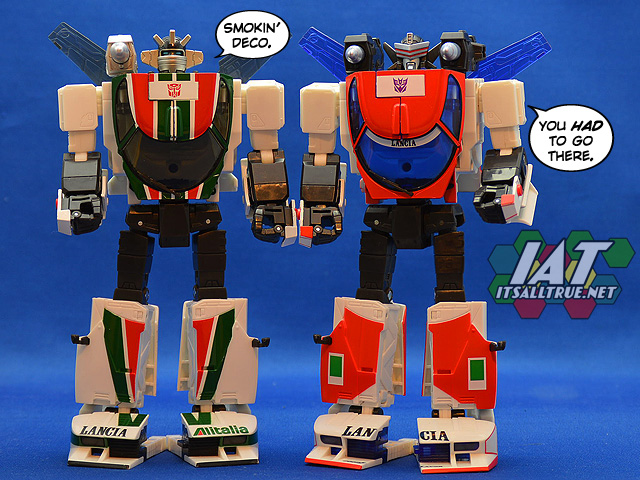 The funny thing about all the gnashing of teeth over getting Exhaust is that I don’t totally love Wheeljack. He’s not bad; he looks pretty awesome as a race car and the transformation is slick, but I don’t love him. I’ve had time (a year!) to sort it out and I think it’s just an overall lack of paint. It just makes him more pedestrian when he’s placed on the MP shelf. He’s still Wheeljack and he’s awesome, but he’s just a shade less so than the others. Continue to Page 2…