The Four Horsemen made the big jump to Toy Fair this year with an official booth at the show. And what they brought along was amazing. True, we’d seen the beginnings of the Mythic Legions line at SDCC, but the 4H wisely used the spectacle of Toy Fair to launch what looks to be their second huge Kickstarter success. I don’t want to jinx it here, but it’s already 74% funded and it’s only been about two weeks. The 4H seem to have this Kickstarter thing down.

The big announcement going into the Kickstater was about scale: 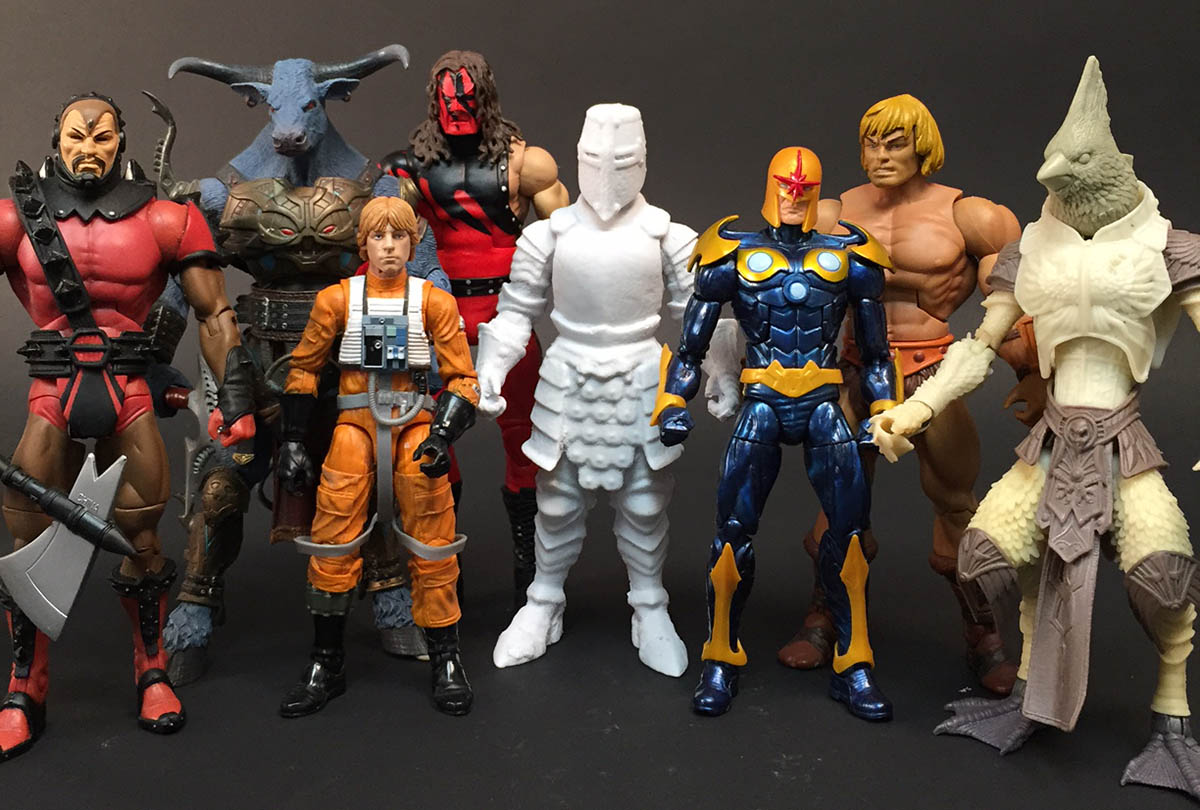 From the 4H: It’s been almost a year to the date since we first debuted our Mythic Legions line at our 2014 Toypocalypse show, and a lot has changed in that year. The characters have changed, the number of characters sculpted has almost doubled, and after a year of debate amongst fans (and amongst us here at the studio too!) so has the line’s scale. After a lot of thought, analysis, and consideration we are proud to officially announce that Mythic Legions is officially a 6” scaled line!

We know that there are going to be a lot of questions about the decision, so we wanted to touch on some of the reasons that we ultimately went in this direction:

The success of our Raven figures. The overwhelming response to the Raven pre-order this year only confirmed further the appetite for highly detailed 6” figures that our fanbase has. The Raven figures are far and above our highest selling figures to date, and that is a statistic that we simply could not ignore.

-Our past releases: Over the years all of our fantasy themed figures have been done in a 6” scale. We’ve invested so much time, energy, and money creating a solid collection of figures at that scale, that it would be tough to lose compatibility and access to those resources. This really became apparent to us when we first received our 6” scaled display bases from the factory. We’ve talked about doing a high quality display base for years, and now we will have one ready to go for Mythic Legions!

-Price/Value: This is absolute biggest part of the equation. When we got into pricing these figures out the numbers were not working out when it came to doing these at 4”. These are complex figures with a lot of parts and accessories, and the paint is very elaborate. With all of that factored in, the prices for 6” figures and the prices for 4” figures were very similar. What that means for customers is that you’d be paying basically the same price (give or take a dollar or two) for either scale. In the end we just didn’t feel like it was the right thing to do to overcharge for a 4” figure when we could give a fair price for a 6” figure.

So there you have it! We’ve been working on this line for almost two years now, and it’s transformed and grown almost the entire time. This decision wasn’t an easy one, and it was certainly not made without careful consideration. One of the primary reasons that we were excited about 4” was that we wanted to do large scale figures and mounts, and just because the line is moving to 6” that is not going to change. It will be more of a challenge, but we are more committed than ever to building an entire world with Mythic Legions full of figures and beasts with wide-ranging sizes and shapes. We already have some BIG things in the works!

Okay, so we’re going 6″. While that is a huge loss for the 4″ collectors out there, I have to admit that it made me pretty happy. My collection – which at this point was largely sculpted by the Four Horsemen – is a 6″ Collection and this is the best way for Mythic Legions to make it’s presence known on my shelves and that of other long-time 4H collectors.

So now that we know it’s 6″, what’s the line about? Check out this snippet from the Kickstarter.

Mythic Legions is a breathtaking new fantasy world of action figures created by the award winning Four Horsemen Studios. The action figure line consists of an endless variety of characters ranging from heroic knights and dwarves to evil orcs and skeleton soldiers. Interchangeable parts and accessories give fans the chance to create and build their very own custom characters. These exquisitely detailed and highly articulated figures also offer collectors the opportunity to build the legions of warriors that they have always dreamed of. Mythic Legions finally brings limitless possibilities to the world of premium quality fantasy action figures.

These will be 6” scaled figures. For example, knights and skeletons will come in at approximately 6.5″ tall while dwarves will be shorter. Most figures have 30 points of articulation

We have created 16 prototypes for the initial assortment plus 6 different styles of legion builders and an amazing Mythic Legions art Book. Each figure features a unique look showcasing the tremendous detail and gorgeous paintwork that was put into each of these characters.

For the initial Kickstarter we are starting with 16 figures, the 6 legion builders, and n art book. Of course we didn’t want to stop there when we are trying to create an entire world of characters, so we’ve also created a fantastic array of stretch goal characters that we hope to unlock with your help. We have also put together a variety of add-ons so that you can customize your order into your own perfect assortment. The shipping costs are included in all of the prices, and using the add-ons will help bring your overall shipping costs down.

But wait? There’s more figures there than what the 4H said? That Amazing Bog Goblin? And accessories? And stands? Checkout this KS update:

MASSIVE MYTHIC LEGIONS UPDATE!!
We are now just a little over a week and a half into our Mythic Legions Kickstarter campaign, and along the way we have seen several requests for certain types of items and characters. One of the great things about Kickstarter is that we can make adjustments along the way to meet the needs of our backers. So today we are making some major adjustments to the Kickstarter page, including newly available items and a restructuring of the stretch goals. Here’s a rundown of what’s in store:

Four Horsemen Figure Stands: These universal figure stands are perfect for displaying any and all 6” scale figures. They work perfectly for Mythic Legions figures, our various Bird figures, along with of our previous in-house lines. The adjustable metal figure clip allows for standing poses as well as hovering and flight poses. The figure stands are available as add ons for $5 shipped for both domestic and International backers.

Mythic Legions Weapon Packs: Each pack includes all six of the current Mythic Legions weapons in a themed paint scheme. Those weapons include: a small sword, large sword, dagger, spear, axe, and shield! The two themes are a heroic pack which is painted in a shining silver and gold combination, while the evil pack is painted in and ominous black and gunmetal scheme. Each weapon pack is in the add ons section and they are $12 for US backers and $13 for International backers.

Urzokk and Bog Goblin figures: Fans have been asking for Orcs, so we figured out a way to move around our tooling plan a bit so we can make it happen with Urzokk! And since those new parts are now available, we are also now able to offer the Bog Goblin figure! These two awesomely evil figures are now available as add ons at $33 a piece for US backers and $40 a piece for International backers.

Reveals and surprises: We are currently working on casting up and painting the hidden stretch goals as the campaign is going on. We are going to show off updated silhouettes, and fully painted figures as they progress! We also hope to have some more exciting updates and surprise items available along they way to ensure that this campaign remains exciting, and most importantly, fun!

Again, we cannot thank you enough for all of the support on this project! The kind words and encouragement have been amazing. We just can’t wait to try and pay you all back by getting some seriously cool toys into your hands as quickly as we can!

That’s right, like any good Kickstarter, there’s more! Most of the Stretch Characters have their identities hidden, but it’s worth sauntering over and taking a look.

There is also one more fun tidbit, the Mythic Legions also herald the return of the Fantastic Exclusive!

FANtastic Exclusive is BACK!!

Four Horsemen Studios is thrilled to announce the return of FANtastic Exclusive! FANtasic Exclusive which ran from 2006-2009 was a process that put the critical decision making regarding action figure production into the fans’ hands. Fans voted on everything from character to scale to articulation points. We had a great run with FANtastic Exclusive, but it became harder and harder to make the system work when production costs were skyrocketing. We’ve talked about bringing it back for years, and that time has finally come!

With our upcoming Mythic Legions Kickstarter, FANtastic Exclusive will make it’s official return, but in an all new incarnation. We’ve designed this round to specifically work with the Kickstarter format, and to move quickly in order to have a final character chosen before the end of the Kickstarter campaign!

The Fantastic Exclusive voting will all take place on the Sourcehorsemen.com forums, and it will launch alongside the Mythic Legions Kickstarter campaign.

Want to learn more? Take a look at the various sites that covered the 4H’s visit to Toy Fair and their KS Launch:

And of course you can go directly to the Horse’s Mouth at Source Horsemen & MythicLegions.com or catch up with the Four Horsemen on on Facebook.

Continue to the
Mythic Legions Kickstarter!