I’m never quite sure what to do about NYCC Coverage. Some years, it’s pretty lean, but other years are pretty damn important. This year is already looking like the latter and it’s still just the first day! There’s no panel coverage just yet, but the recent trend has been for companies to put some goodies in their display right off the bat and this was no different, particularly for Mattel. 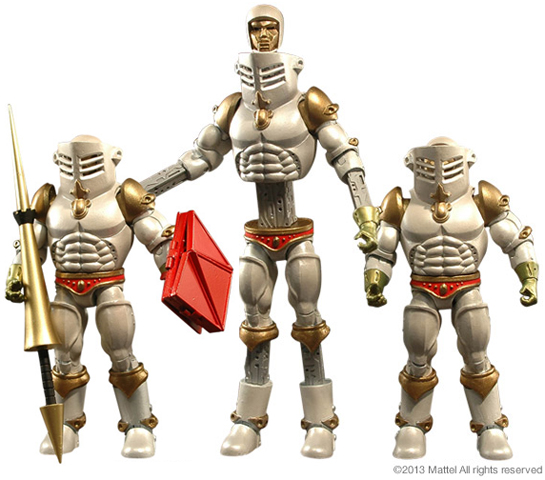 Masters of the Universe

Mattel kicked things off by showing off the fruition of their PowerCon tease: Extendar (via ToyArk)! The figure looks absolutely stunning. Hes appears to be an almost 100% tool (there are likely some reuse parts here and there). It also looks like his vintage “action feature” will be replicated by six add-on pieces that will allow him to extend his neck, waist, and all four limbs. If you look closely on the prototype there, the right arm is extended between the glove and wrist while the left is extended at the wrist. I’m not sure if that’s a new option or a misassembly, we’ll have to see on the final figure. The shield and lance accessories both look sharp. I can’t stress how happy I am with him. In fact, I’m liking just about everything! I’d say the only tweak would be the gloves not matching the rest of the armor. That’s a discoloration the vintage figure suffers and one we don’t need replicated. I’m hopeful we’ll get that fixed. 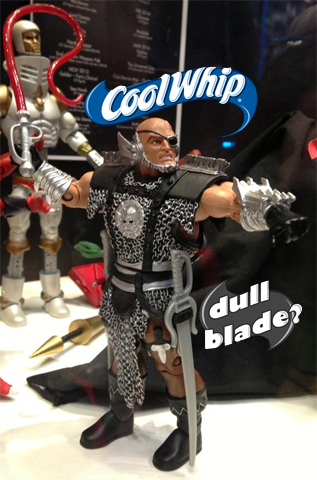 Not as stunning was this pic of Blade taken by the Org’s BCRDuke! The figure still looks like a total badass, but Mattel, when a guy’s name is Blade you sorta got make sure his sword is as awesome of the figure and that unpainted dealy on his hip there? Not so much. 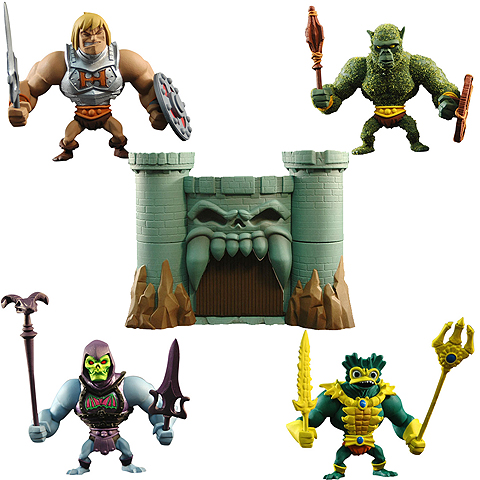 The other MOTU news comes in the form of the smaller, Mini-Masters! I didn’t snag these at SDCC – I think this is more of a favorite characters only deal for me, but it now looks like it will be favorite character plus whoever else is in the 2pk. (Would a Faker & Scareglow 2pk be too much to ask for??). Judging from the display cards, these will be released in six 2pks on Mattycollector. More exciting, each 2pk will contain a C&C piece for a Mini-Master Castle Grayskull. That could get a guy in trouble. Check ToyArk for tons more pics.

To follow-up with my usual “praise, then question” coverage of Mattel, it appears that Mini-Masters have gotten a tad more Mini (via ToyArk). Mattel surely went with the Battle Armors because they’d already released the regular versions as the SDCC exclusive, but it turns out these new figures aren’t in scale with those. Oops.Continue to ToyArk’s Full MOTU Gallery