When I was young, I was a huge Godzilla fan. There was nothing better than giant monsters destroying cities. Even today, I still love watching those cheesy movies and their modern remakes. That’s why I’m excited every time Revoltech releases one of these characters.

A few weeks ago, we took a look at Baragon and today I’m looking at figure #6 in Revoltech’s Sci-Fi line: Gamera, Guardian of the Universe.

I didn’t discover Gamera when I was young. I didn’t even know there was a giant turtle that protected the Earth until one day, while flipping through the cable channels, I came upon an episode of Mystery Science Theater 3000. This was my first exposure to Gamera, which might explain why I don’t have the reverence for the giant turtle that I do of the giant lizard. Comparatively, I’ve always felt the old Gamera movies looked more fake than the Godzilla films. (Yes, I do realize that’s ridiculous.) But still, Gamera is Japan’s other monster, so I felt compelled to buy him. 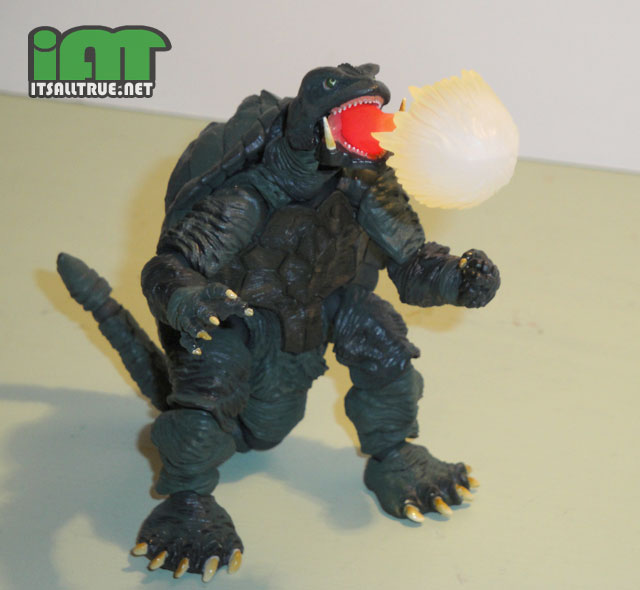 One reason I was prone to buying this figure is because of his look. This Gamera is based on his 1995 movie appearance, Gamera: Guardian of the Universe. Like Godzilla 2000, the studio took the opportunity to update Gamera’s look from the cheesy rubber suits to a more realistic and dangerous design. I have to admit, I’m glad Kaiyodo went with this design first. The sculptor, Matsumura Shinobu, did a terrific job not only on the figures design functionality but on the overall look. There are details that you’d expect on any giant turtle figure: a hard shell with multiple layers of plate, wrinkly looking turtle skin, and rows of tiny individually sculpted little teeth. All these things look great, but it’s the smaller, more accurate details that amaze me: the little spiny ridge between his eyes, the sculpted detail on the roof of his mouth, and the sculpted line work on the bottom of his feet. You can’t look at this figure and see an area without details. 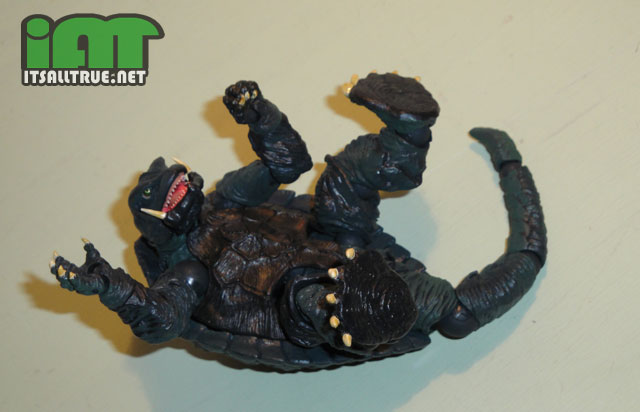 Gamera uses the classic Revoltech joints. His jaw, shoulders, elbows, waist (yes, there is a waist in there), thighs, knees, and ankles are all Revolver joints. His tail is segmented, like a finger, and contains three Revolver joints. Gamera’s forearms have a cut joint half way up, allowing them to swivel. This was an interesting choice, but it allows for his hands to be changed out for alternates easily. The wrists are hinge joints on both sets of hands. Continue to Page 2…