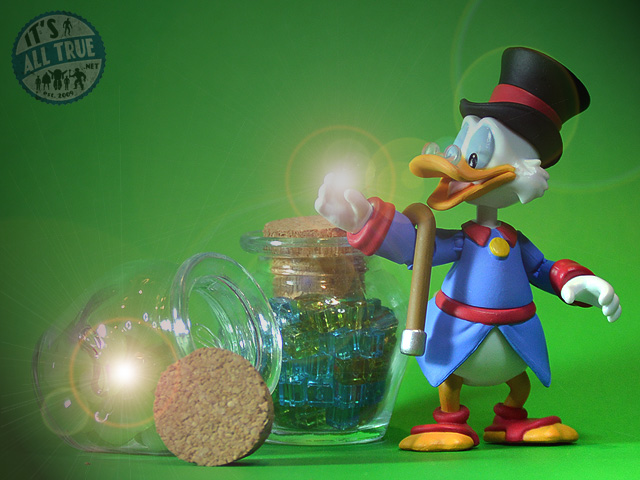 As I get older, my childhood becomes more of a blur. There are oddballs that made an impact. I remember watching Transformers: The Movie in the theater with my Dad and going home to tell my Mom all about it. I remember getting two Super Power Martian Manhunters for Christmas and returning one to Walmart for a Red Tornado, inextricably linking the two forever. I remember the clean, black & white simplicity of Topps 1986 baseball cards. For the most part though, I just can’t keep track of all the cool things about the late 1980s and early 1990s. The result is that nostalgia can really sneak up on me.

Last week, I ran across a LEGO Forestman and suddenly I couldn’t stop thinking about the Camouflaged Outpost for the first time in nearly three decades. I loved that set! It was part tree, part giant rock, all secret base. I had a similar revelation last month when my son & I sat down to watch the new DuckTales. I’ve left Disney behind a bit as an adult and am getting to reexperience some of it with my son. I find myself right back to explaining how Goofy & Pluto can co-exist and identifying which one is Huey and which one is Louie.

When we set down to watch the new DuckTales, I was caught in between the flood of my own memories and watching my son learn the characters anew in what’s essentially “his” version. Of course, while I was thinking back to Gyro, the Beagles, and the Number One Dime, my son was picking out his favorite character, the Aflac Duck from the crossover commercial. Well, maybe he’ll have a sentimental moment for an old insurance commercial in thirty years, who knows?

After enjoying the new show and being drawn back into the old one, my mind turned, as it often does, to action figures. I may have been away from the site for a while, playing Dad and working too hard, but my toy addiction is still quite robust. It doesn’t seem like there was a lot of collecting options for DuckTales figures, though Darkwing Duck got some love back in the day. Striking while the iron is seemingly super-hot, Funko has stepped in to end the long wait – which has been decades for some and only a few weeks for me. Shucks.

Last week, Funko announced a new 3 ¾” line featuring characters from the Disney Afternoon cartoon block. The first wave features characters from Talespin, Darkwing Duck, Rescue Rangers, and DuckTales in the form of the richest duck in the world himself, Scrooge McDuck. Last week, they looked wonderful in the mock-ups and the collector response has seemed overwhelmingly positive so far. Which is great because now I can tell you they look great in person as well. The excitement out there will be richly rewarded when the figures arrive. Continue to Page 2…