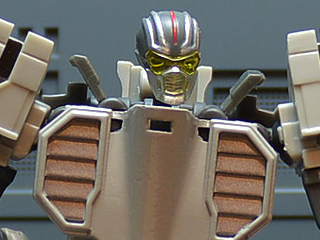 When my Machine Robos arrived, I immediately went to Battle Robo and dug into taking some pictures, playing around with him, and just having a good time. I loved him. He’s a great toy. And then I opened Eagle Robo… he’s fun too. I shouldn’t give Eagle Robo too hard a time. I do actually like him quite a bit, but he’s not as good. I’m a little concerned that if folks dip their toes in the water on this line, they might pick the venerable Gobots commander and then not be as satisfied as they might’ve been had they gone with Battle Robo.

First, there’s a lot to like. The robot mode looks sharp out of the box. I never had Leader-1 as a kid. I wanted to have him and I got close once we my family ran across the blue repaint in a Skaggs Grocery store years later. My parents ended up not grabbing it for me, but I at least saw it! I was happy about that. I bought a used one year later. He’s a bit of a beater, but I like to think he’s that same one I saw years ago. On a side note, I miss that Skaggs Grocery store. It’s a Ford dealership now. Woo hoo.

Visually, I really like the overall robot. I like that so much of the jet mode is visible in robot mode. I love Battle Robo, but since he’s a futuristic tank his robot mode looks mostly like a robot. Eagle Robo has a more transforming robot feel with the alt mode shining through. The high shoulders bring a good balance to the clunky legs and I like the head sculpt. The head sculpts are the big thing to get used to since they’re the most notable anime aspect of the figures, and different from the toys we remember. The only visual negative is the neck – it’s just this lone black rod. Like Leader-1’s head is just continually on a pike. It just is weird. There’s nothing sophisticated about it and it just jars an otherwise near perfect visual.

Like Tank, the upgraded articulation is one of the best things about the figure. The legs are a little blocked by all the kibble. The wings wrap around the legs but the vertical stabilizers are immobile and get in the way of the ankle on deeps poses. He can still do plenty – the transformation process gives him a second hinge in the leg that helps the ankles out, but he’s not quite as possible as Tank. The arms are just as good as Tank and the neck articulation even better. The rod is ugly, but it helps the figure be expressive (& helps you find poses where you can hide the rod entirely behind the chin.

The transformation process is where Eagle Robo lets me down a bit. In fact, I have to use the dreaded F-word to describe him: fiddly. The legs are great, they’re the most Gobot part of the figure with the wings just wrapping around and keeping it simple. The nose cone also pops over the head. Simple enough. But the arms… I’m not even sure I understand where everything tabs in. I just kind of press it altogether and hope it gets there. I still can’t get all the pegs on the underside aligned, but he holds together fine. Continue to Page 2…