Check out these new MOTU Classic figures coming February 15th only on MattyCollector.com!

Wun-Dar will be mailed out automatically to all Club Members. (the subscription fee paid at sign up covers this figure). Club members will also recieve an exclusive map of Eternia which contains secrets of the Elders on the backside! These secrets can not be shared with anyone who is not a member! Anyone caught sharing them (or posting them online) will be cursed by the black magicians of the Dark Hemisphere forever! So guard these secrets with all your power!

Battle Cat is the first oversized figure. He will be $30.00 and is not part of the Club Eternia subscription. First come first serve on this one!

Trap Jaw contains all the parts for Trap Jaw and Kronis. He includes an interchangable head and arm as well as three weapon attachments. His jaw opens and closes too! He is the club Eternia figure. If you are a member you will be billed automatically and he will be shipped. 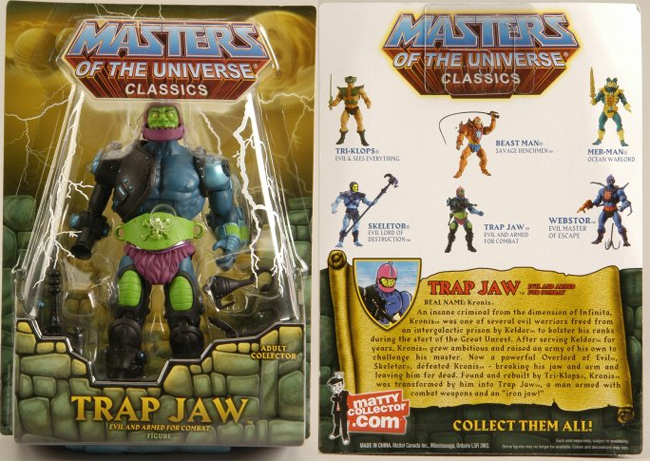 Here is Wun-Dar the Savage He-Man! He is only available to Club members. You will automatically receive one Wun-Dar figure for each subscription you purchased. Wun-Dar will not be available for sale. Subscribers will also receive a map of Eternia folded as a 10X10 square with Wun-Dar. (it folds out to 30 X 20) 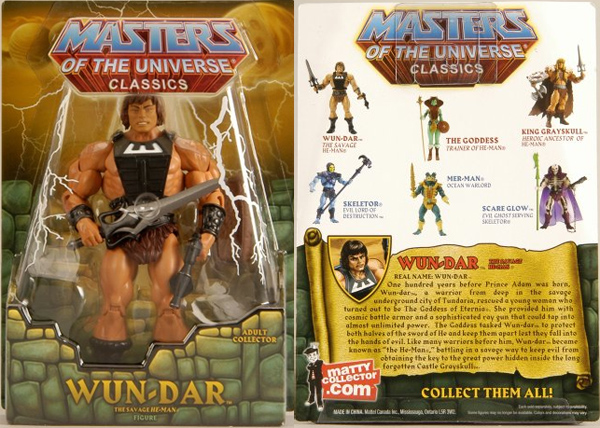 You will receive one map and one Wun-Dar for every subscription you purchased.

See you online! And don’t forget Goddess and Randor on sale Dec 15th only on MattyCollector.com!

Here are the two bios if you can’t read them from the picture:

Trap Jaw
Real Name: Kronis
An insane criminal from the dimension of Infinita, Kronis was of several evil warriors freed from an intergalactic prison by Keldor to bolster his ranks during the start of the Great Unrest. After serving Keldor for years, Kronis grew ambitious and raised an army of his own to challenge his master. Now a powerful Overlord of Evil, Skeletor, defeated Kronis – breaking his jaw and his arm and leaving him for dead. Found and rebuilt by Tri-Klops, Kronis was transformed by him into Trap Jaw, a man armed with weapons and an “iron jaw!”

Wun-Dar
Real Name: Wun-Dar
One hundred years before Prince Adam was born, Wun-Dar, a warrior from deep in the underground savage city of Tundaria, rescued a young woman who turned out to be the The Goddess of Eternia. She provided him with cosmic battle armor and a sophisticated ray gun that could tap into almost unlimited power. The Goddess tasked Wun-Dar to protect both halves of the sword of He and keep them apart lest they fall into the hands of evil. Like many warriors before him, Wun-Dar became known as the “He-Man,” battling in a savage way to keep evil from obtaining the key to the great power hidden inside the long forgotten Castle Grayskull.