I always think it’s funny when I get an e-mail or a PM asking if I’m still collecting or going to be reviewing MOTU Classics. MOTU is such a huge part of IAT, that I can’t imagine IAT without He-Man being a part of it (even if we’ve only reviewed one MOTU figure in two months! Our bad!). Now, it is true that I haven’t been reviewing the MOTUCs of late. I’ve been letting Vault have a bite of the apple. I think the last figure I reviewed was either Nepthu or Batros back in September, but I am still happy to be picking up the line and looking forward to a lot of the upcoming product!

To that point, I’m jumping back in today with a MOTUC review of a particularly fun release: Modulok! (Yes, I know, we’ve skipped a few! We’ll get ‘em, don’t worry!) I never had Modulok as a kid – in fact, I don’t think I had all that many of the Horde at all. I was always a fan of Skeletor and his evil army first & foremost. Ironically, though, Modulok appeared in the Filmation cartoon as more a rogue agent. He had only one head (though the second appeared as a robotic head intended to house MAA’s consciousness) and sought favor with Skeletor before transferring over to the POP cartoon and joining up with the Horde. Either way, I just don’t imagine my parents or I ran across Modulok back in the day. He was too cool to pass up. 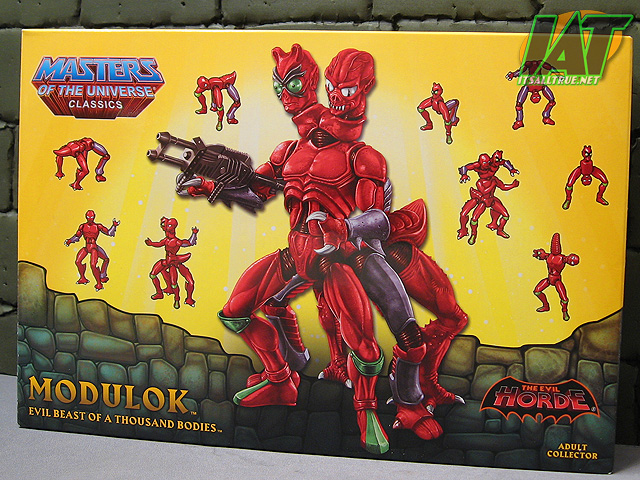 Just look at where we are right now. We’re seeing Modulok’s action feature hit the big time. The indie world is still afire over Glyos and the Glyos system. Hasbro has taken notice and started with the Assemblers line for IM3 and the larger, better overall, Mashers line that will extend to at least Marvel & Transformers. Rearranging your figures parts has never been a bigger deal, but Modulok had all that down nearly thirty years ago. He wasn’t the first, of course, but he was a big deal all the same. 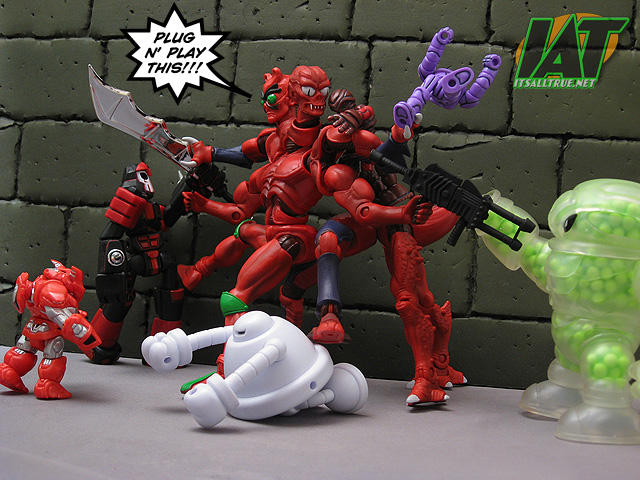 As a big fan of this time of built-in customization, you can surely guess that I loved Modulok. Once I got him out of the package (glued shut, Mattel? I thought we were trying to not waste money?) I quickly got to assembling him from his packaged bipedal form to a monster using all the pieces! Well, all but one. This guy has got two butts and you’re just going to have to let one sit out or use at a club. Your call.

It was awesome. All the connection points are ball & socket (the shoulders & hips are also hinged) so we’ve got a fantastic range or movement on this guy. Everything snaps together pretty cleanly and I don’t feel like I’m going to break him which was something I was really worried about going in. The only downside is that a lot of the connections are made from a particularly soft plastic and I’m worried if they’re going to get chalky in a few years. I’ve been “losing” JLU figures to that white dust left and right lately. Fingers crossed on that. 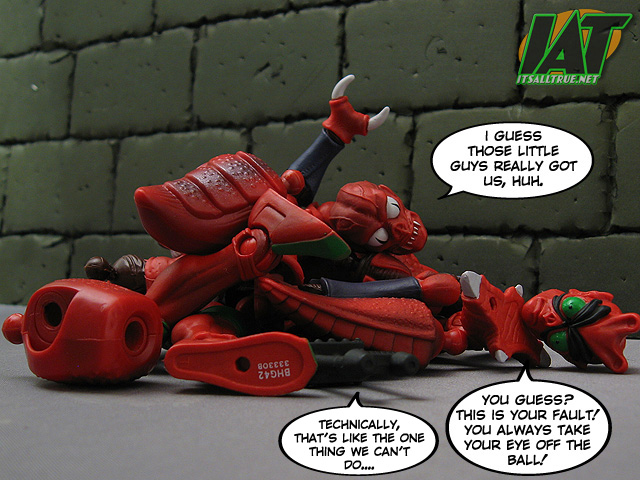 Sculptwise, Modulok is pretty masterful. The unique pieces look unique thanks to sharp updates to the old designs and added textures throughout help bring the sculpt to life. The only problem sculptwise is that considerations weren’t always made to accommodate the “plug n’ play”, part-swapping feature. This most noticeable on the hips where the Mattel team had to widen the piece to make things work. I wouldn’t mind it, but the widening isn’t even on both sides (duh) and it’s smooth & featureless, which really calls attention to it. I think he looks worst in bipedal forms, but it does blend out a little if you add everything on to the figure. Either way, I wish the crotch had been built up a little more to make the whole area more aesthetic than just functional. Continue to Page 2…