I’m just going to tell you readers up front. I might pull this one out, I might not. You see, I just had to go and gave a repaint, a repaint, a twelve picture review. Yeah, I’m a friggin’ genius. Anyway, that’s a lot of text to fill up. I may be up to the task, I may not. I do know that I can’t just say, “he’s green” and be done with it, so let’s elaborate from there. I will warn you that Thermal Dutch here isn’t actually in a lot of the pictures, so if you’re one of those folks that just look at the pictures… we’ll, you’re not reading this anyway.

Hey, that wraps up the intro paragraphs. Two down, only a few more to go… 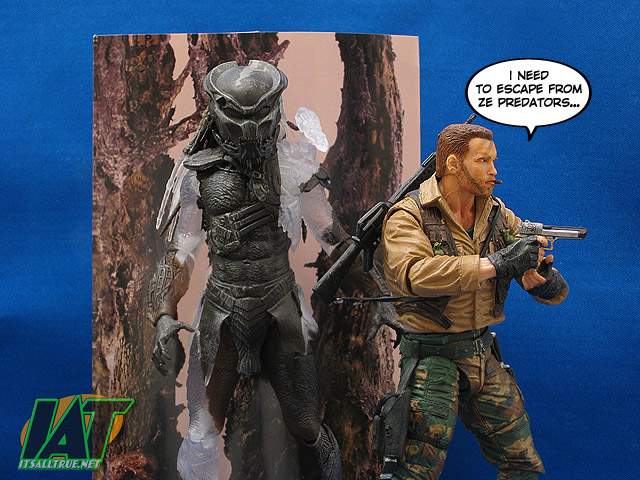 If anyone wants to know why I lavish so much praise on NECA lately, it’s because they’re clearly having fun. And I’m having fun with them. MOTU Classics is a great line, but it’s so damn serious all the time. MOTU fans have had a rough go the last fifteen years, but that franchise has so much drama in it that it spills over into fighting amongst its fan. Not fun. DCUC was a great line; it probably gets the biggest smile from me when I look at my display, but it died. That’s really not fun. Now, there are other fun lines out there that I also enjoy. The Glyos Kingdom is a great example. Transformers is great right now (though a little too serious for my wife & wallet). And then there’s NECA. In the last two weeks, I’ve picked up a Giant Batman, colorful Predators, a rather touching Colonial Marine, and, oh yeah, a new Dutch that looks like he just blew up a cotton candy factory. 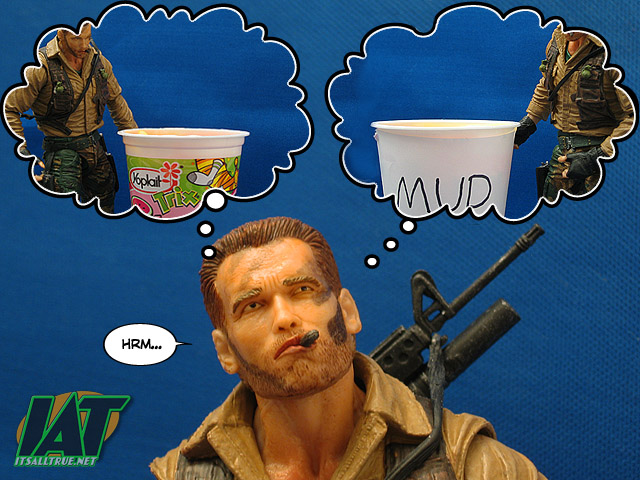 I’ve mentioned before that I’m a big fan of Joe Posnanski’s Plus-Minus System. It’s a very simple method that potentially explains why different folks can enjoy the same things differently. Basically, it very non-scientifically takes expectations into account. If I’m expecting a zero and I get a four, that’s +4. Oppositely, if I’m expecting a five and I get a two, that’s -3. MOTU Classics Batros is a great figure that blew away my expectations. He might not be that fun for everyone, his review may even have been a little too excited, but I simply loved how cool he turned out when I wasn’t expecting him too at all. That’s how Plus-Minus works. 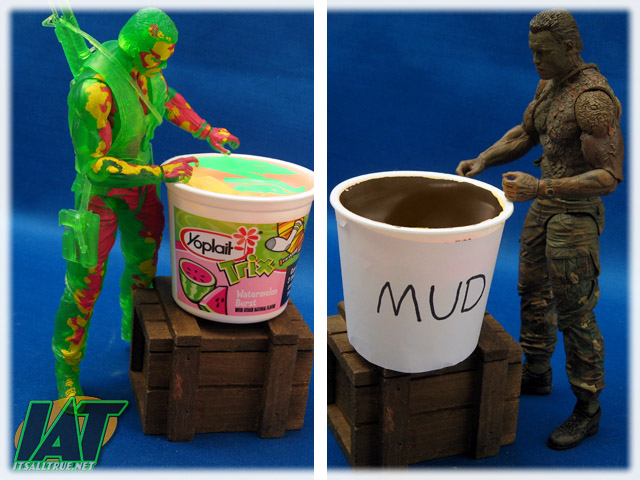 I bring this up, because I think Trix Yogurt Dutch, as I affectionately refer to what’s really Thermal Vision Dutch, had some really lofty expectations to deal with. I bought Cigar Dutch easily. I bought Muddy Dutch semi-reluctantly because I couldn’t deny that he was so damn well done. Trix Yogurt Dutch made me laugh so hard during SDCC or NYCC, wherever we saw him. Here we were all thinking, “gosh, how many ways can they repaint Dutch”! And yet, NECA wasn’t even close to done (& they’re still not, we all know NES Dutch is coming eventually and I still want NECA to make a Red Polo Dutch if I’m being honest with myself). 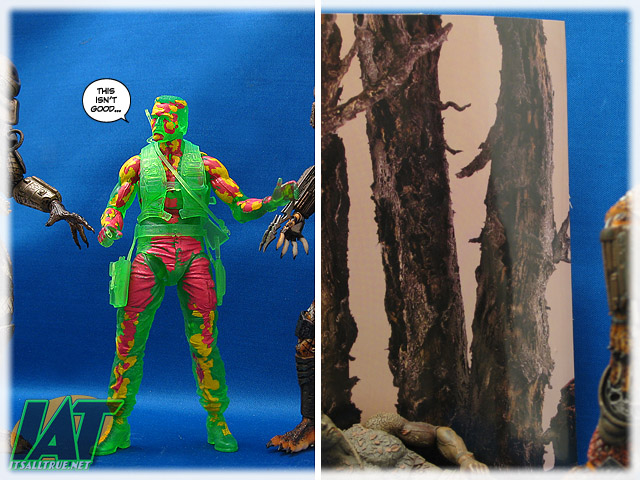 For me, Trix Yogurt Dutch kinda came to represent the very fun road that NECA was heading down. Admittedly, I don’t have any of the NES figures yet (soon, Robocop, soon). And while I am on a steady diet of rockin’ Kenner Predators, Trix Yogurt Dutch seemed so much further out there than even those. So silly that I thought I simply I had to have him. While I have 3 Dutches now, Trix was the only one I wanted before I saw him. So I bought before I saw him too and that turned out to be more than a little ironic. 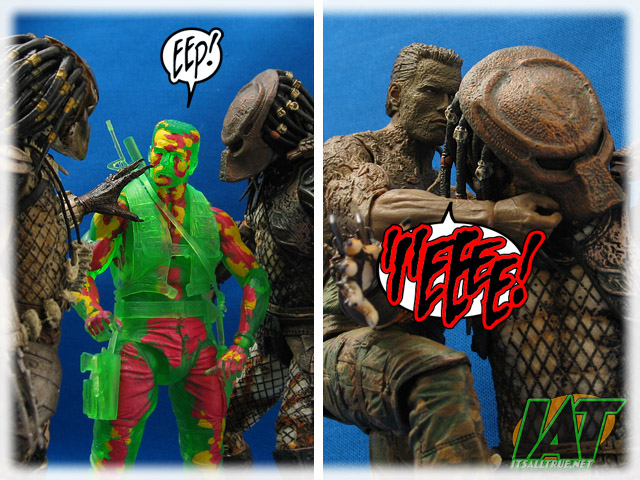 When the BBTS box arrive, I had… a little trouble finding that same fun in person. The Thermal Vision idea itself is still solid and he’s spot on to the figure that NECA debuted last year, but having him in hand, I just don’t know. Maybe it’s really just the hype I piled on to the figure, but the effect the clear plastic and special deco has in person just isn’t the same as it was in the pictures. I specifically put that Stealth Falconer Predator in the first shot because it’s a great example of something fun in pictures that was also completely awesome in person. 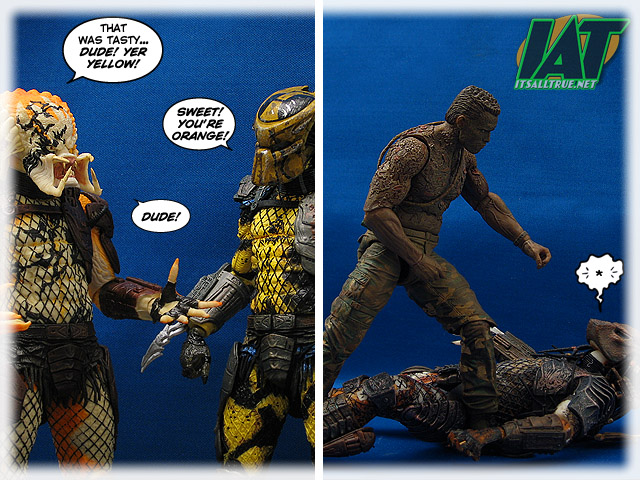 So what am I not liking about Trix Dutch? Well, all that there’s really to be unhappy with is the deco. I love the clear green, I have a well-known soft spot for translucent figures, and I think that was the right way to go for the base. So that leaves only the paint. I like it, but I wonder if they’re taken from something particular, a shot in the movie or a poster, since they don’t quite make sense as a person’s heat signature. Random yellow spots on his shoes? No paint under the vest? In some ways, the paint almost seems like it was dictated by the sculpt more than anything else. So I don’t know. I’m just being picky, I suppose. Maybe I should take some of my own “have fun with it” advice? Oh, did I mention the back is completely unpainted? Continue to Page 2…