NECA took dead aim at my wallet to kick off the New Year. In the last two weeks, my BBTS POL has briefly held the quarter-scale 1989 Batman, Predator Wave 11 (Trix Yogurt Dutch!), Aliens Wave 2 (Sgt. Windrix!), and ED-209. Even not counting FansProject Diesel & Figma Link, that’s quite the chunk of change. It’s like NECA overload.

Heck, I wasn’t sure what to review first! The quarter scale Batman is too big, so that’ll take some prep work. I’m graciously having Vault take point on the ED-209 review even though I’m arguably the bigger Robocop fan (seriously, folks, when you see his review – that’s my Robocop figure in the pictures!). I ultimately settled on something from the Predator wave, the big ol’ Yellow Predator specifically. Or, as I’m supposed to call him, the Wasp Predator. 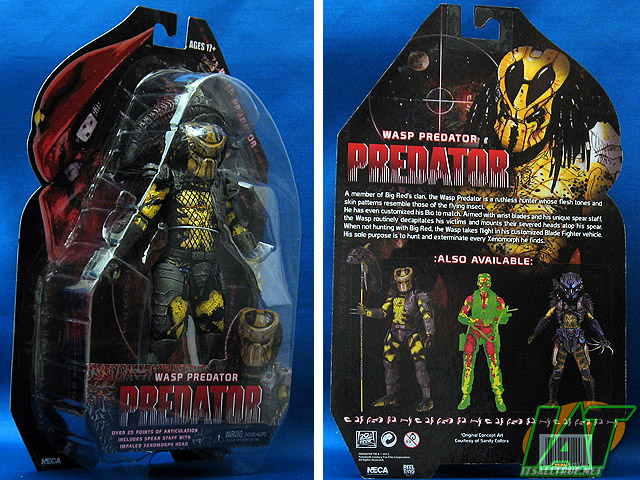 The Wasp Predator, like Big Red (I really need to get around to buying one of those) & the Albino before him, hail from the fan-film Dead End. If you haven’t seen, it’s like eight minutes long and better than some of the feature-length films so check it out. While I’m a fan of the short, I have to be honest and say that a large part of this purchase was due to the “Kennerness” of having a yellow Predator. Originally, I was all for just having the two primary Preds, City & Jungle. But this crazy color schemes have got me buying more & more NECA both last year and this year. I love it. We can blame that I grew up the in late 80s and early 90s if you want too. I’m at peace with that. 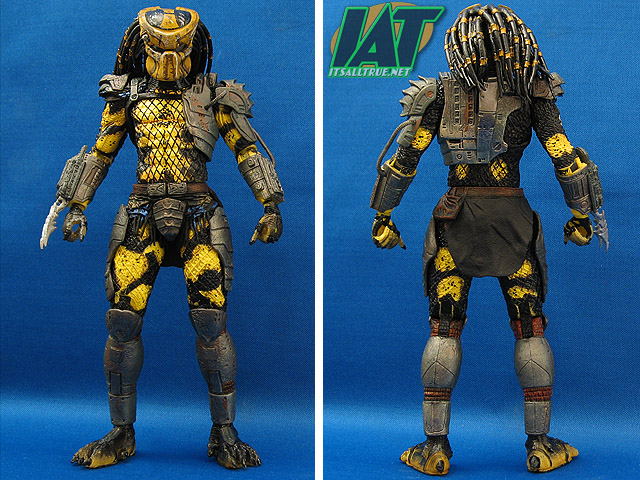 Now Wasp Predator, is entirely a repaint so that could be considered a knock against his score, but I don’t feel that way. Like the Albino Predator, that costume closely resembles the Jungle Hunter anyway. The new shoulder piece that was needed for Albino is used here to get that particular detail right, but there are two areas where a more detailed-oriented collector could be less than satisfied. It’s hard to see a lot of the little details in Dead End, but it does look like Wasp should have some of the skull jewelry the Jungle Hunter sported. Also, the Wasp Predator didn’t sport the netting on his legs like nearly every other Predator. NECA worked around that by simply not painting the sculpted in netting. It does look a little weird and I wouldn’t mind seeing NECA put together some bare legs for this size of Predator in the near future. 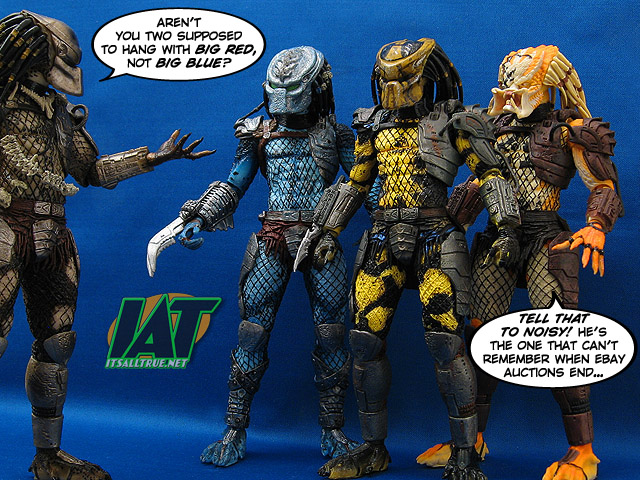 NECA did make one more change from screen accuracy that I absolutely love though. While Dead End was in development, the Wasp Predator sported this snazzy custom deco on his helmet. For whatever reason, they decided not to use the helmet in the final cut. NECA opted to go back and use the helmet for the figure. This is a little funny, as the Albino Predator did sport his helmet, but NECA opted against using it for his figure. The folks at NECA just have a good eye though, I think. Albino looks better with the mask and the painted-up mask for Wasp works really well with the figure. It totally works for the figure. It blends in with the rest of the color scheme well and the weathered look with the brushed-on silver brings the sculpt to life. Continue to Page 2…