With all the hubbub of SDCC & Subscription sales, I’ve missed some important updates for the Four Horsemen Kickstarter! As can likely be heard around every toy water cooler in the world, the Raven Kickstarter has been a smashing success! I haven’t had time to crunch the stats like I did a few weeks back, but check out these numbers from last night (courtesy of Tekwych on our forums):

In addition to unlocking all twelve of the initial birds (including the awesome Screaming Eagle variant), both the regular wings and the bone wings, the Four Horsemen have been adding even more unloackables as the pledge total climbed higher and higher. Those new pack-ins have included wings in colors that will match all the birds, webbed feet for Minotaur the duck, a skull head included with the bone wings (which essentially makes a 13th figure), figure stands, the “Raven Battle Pack” (screaming head & helmet) in white for the White Raven, figure stands, AND a 14th figure: the Flamingo (with his own set of webbed feet). I think I got it all.

Oh, there is one more add-on for collectors who have the ability to go “all-in” with the 4H’s “Complete Package” that will include all Birds & all Add-ons (except for the figure stands). They’re not revealing exactly what it will be before hand, but we’ve been given a clue in that it “will be a real hoot to collectors!”

I know that many of expected this project would go through, but did anyone think it would pull in over $200k (which it looks primed to do in the next few minutes, never mind the next five days)? Wow! The Four Horsemen have a well-earned success on their hands! 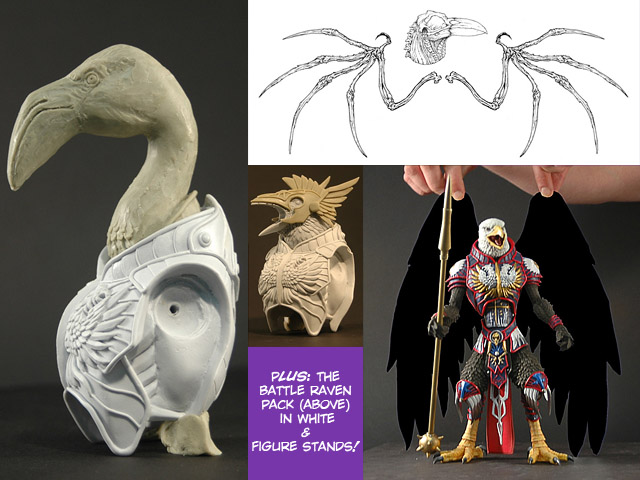 For more details or to sign up, continue to Kickstarter!

10 thoughts on “Only 5 Days Left on the
Four Horsemen Kickstarter!”