I wasn’t sure if I was going to buy the single-carded Xenomorph. Originally, I was figuring that I’d have the Genocide 2pk and wouldn’t need this release. I wasn’t sure how different the two figures would be painted. So I asked on Twitter… and NECA answered to let me know about the different decos. Now that’s service.

I snagged my Xenomorph while on a trip to KC. My TRU* has had Hicks & Hudson holding down the fort for awhile, so I was happy to have a chance to check the four stores up there and even happier that one of them had the Xenomorph. 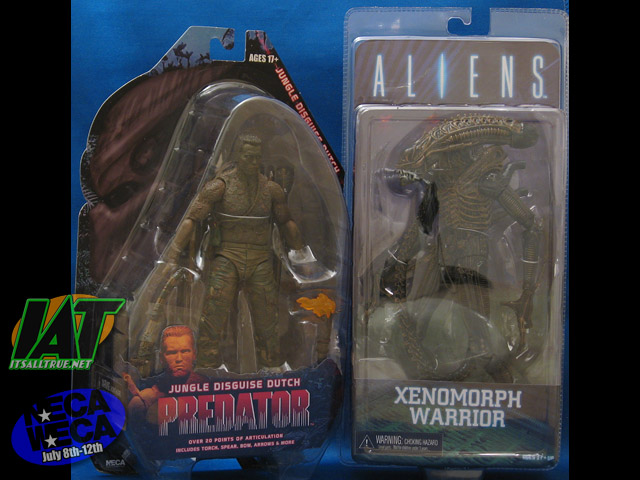 * – (And just to let you know how much I dislike my TRU, this trip was the first time I saw the spring-loaded Robocop, Rambo, and some older Terminator & Rocky figures that I didn’t know existed).

The Xenomorph and I had a long car ride home after I picked him up. I had nothing in the car to free him from his all-plastic prison – otherwise there’d be no package shot in this review! It also allowed me to notice that the Alien was trying to escape! The package is a tight squeeze for the little guy and his feet were clawing through the insert at the bottom of the packaging. 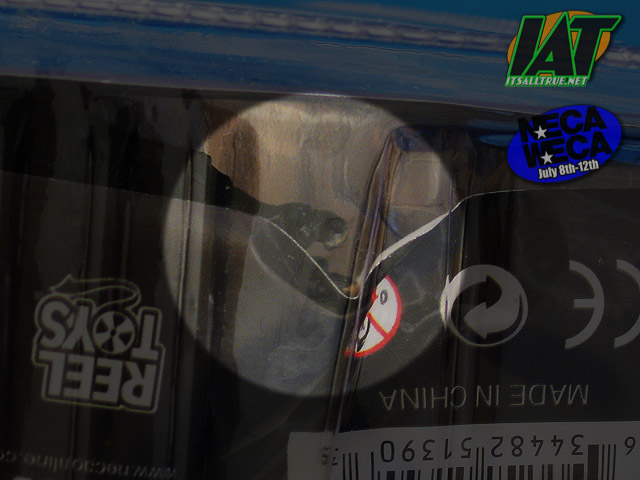 Once I got home and freed the Xenomorph (generally not a good idea, I know) I was even more impressed with the size. I was happy with the size relation of the Predators to Dutch, but the Xenomorph even towers over the Predator. Clocking in at 9”, that translates to an 8’ height for the Xenomorph, which is a little big, but I can’t deny that he looks great at this size. 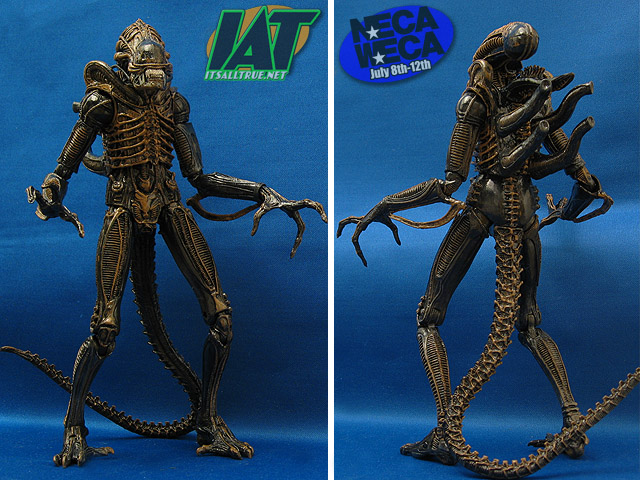 The sculpt is again NECA’s strongest point. NECA has made some Alien figures in the past, but I don’t have them to compare. From the images I’ve seen, those previous figures, particular the Requiem Alien, seem to also be on the high end in terms of good sculpting and NECA is just continuing that tradition here. 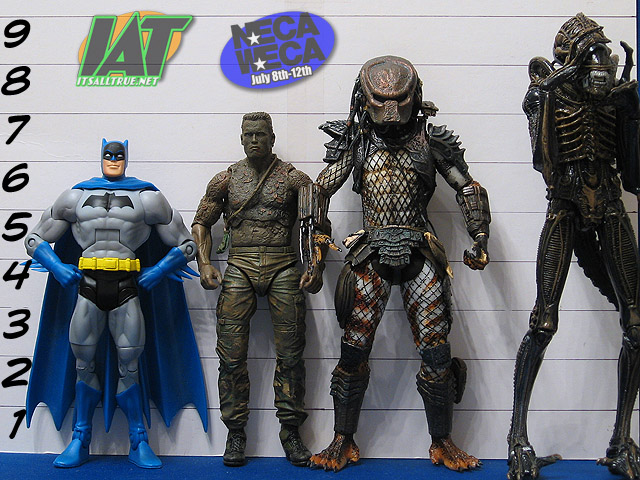 The detail is amazing throughout the figure. I wasn’t able to get a great picture of it, but if you have this figure and really want to appreciate the sculpt, turn out the lights. Well, most of ‘em. The figure looks fantastic in low-light. This is partially due to the brown highlights and high gloss paint, but the sculpt comes alive when it reflects what little light there is in a room. It sounds odd, but it’s how we’re used to seeing these guys, right? 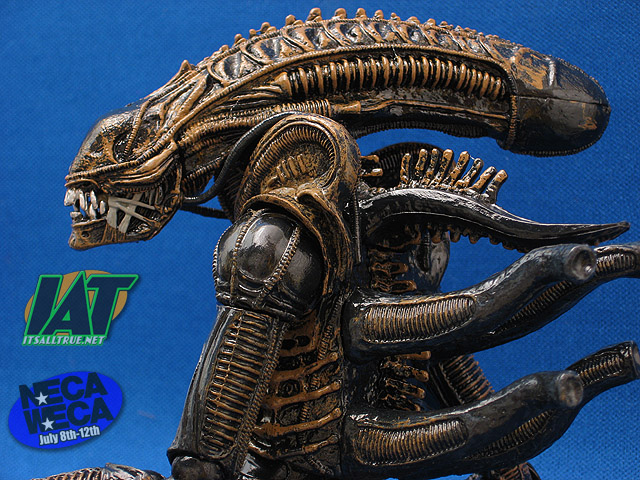 The aforementioned paintwork originally struck me as odd. I hadn’t ever noticed any brown coloring in Aliens, but as I said above, they like to run around in the dark. When you put the figure in low-light, the brown pretty much washes out and it’s easy to see how moviegoers weren’t always able to see the brown aspect to the Xenomorphs in the film. 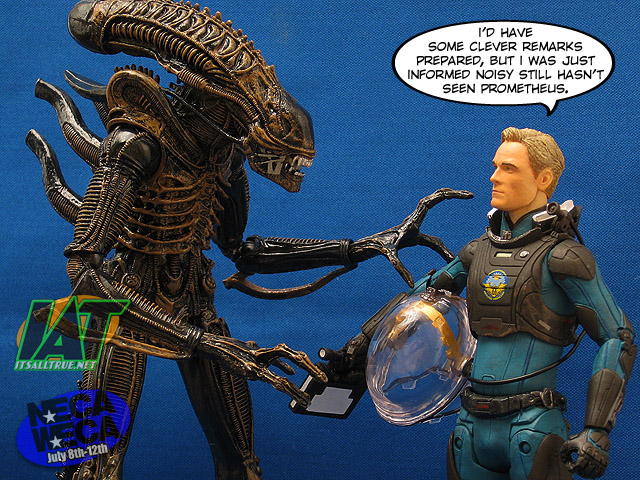 The brown wash affords the figure some slop throughout, you just wouldn’t really notice it along with everything else. The only area where the paint work is really crucial is around the jaw… and that does turn out to be a weak spot for the figure. My Xenomorph’s bottom teeth aren’t quite fully painted, but the real oddity is the gray paint work on the sides of the mouth. I’m not sure why it’s grey, but it’s dull, flat color just makes it look out of place on an otherwise really nice presentation. 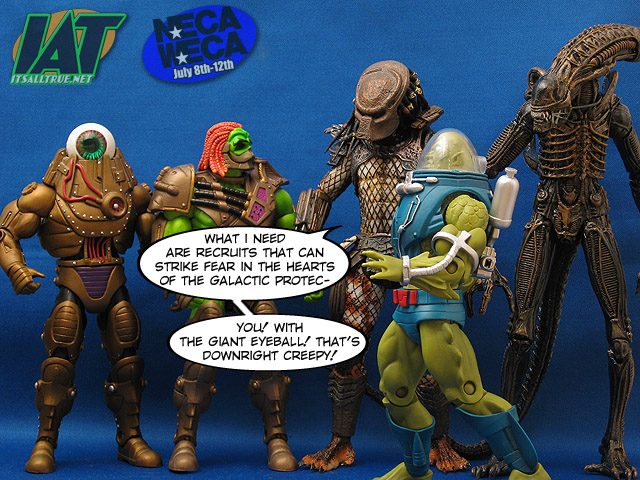 Like the Predators, what really sets this NECA release apart from previous versions is the articulation. This guy is articulated everywhere, possibly venturing into that “too much” ML area. Most of the articulation is excellent – the arms feature ball shoulders & wrists, bicep swivels, and my favorite, double ball-jointed elbows. Now, not every figure’s sculpt can work with double ball-jointed elbows but they are my new favorite thing! And combined with the bicep swivel and other articulation, theses arms can pose pretty much anyway you want them too. Continue to Page 2…