While NECA has been doing amazing things with their Predator line I tried my best to not get dragged into it (Big Red was on my radar, but I never saw him in stores). I’m just buying too much lately. Mattel has their sizable monthly cut of my paycheck and I committed to that before I knew I’d been buying so many third party Transformers. And then there’s that whole Hot Toys addiction I haven’t mentioned…

But NECA has more or less insisted that I pay attention to them. First, their Predator line has simply kept getting better and better. The figures from a few years ago are good, but the improved articulation and attention to detail on the more recent releases is enough to tempt any collector whether they like Predator or not. And then they had to go and make a candidate for Figure of the Year. Thanks, NECA. 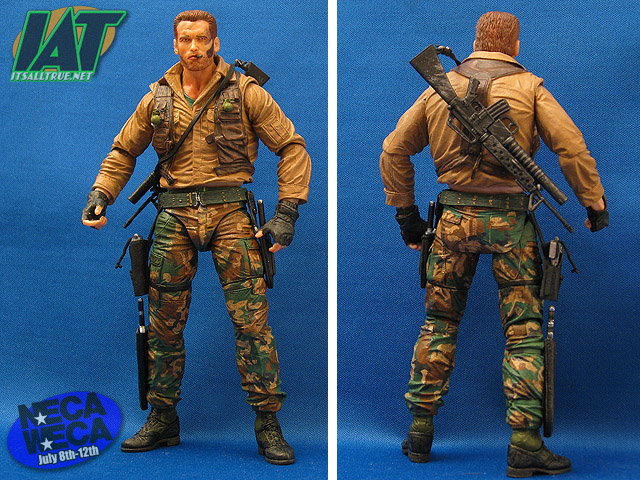 See, the funny thing is that while I consider myself a Predator fan and kept hearing the siren song of the Predator line, I never would have guessed that I’d really want a Dutch figure. I’d accept it if someone told me that meant I just wasn’t that greata a Predator fan and simply don’t understand – hey, anyone out there clamoring for a Michael Harrigan figure? But Dutch took me by surprise. And not only that, I’ve suddenly found that I might need multiple Dutch figures. 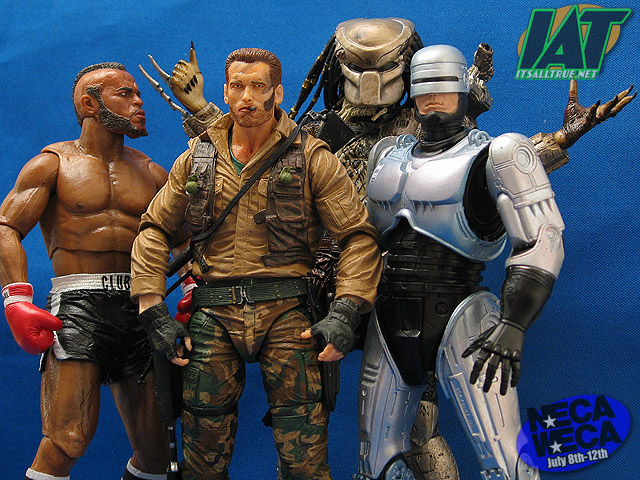 NECA has four available at the moment: Jungle Extraction (presented here), Jungle Patrol, Jungle Encounter, & Jungle Disguise (i.e. “Muddy” Dutch). Now, the first impressive thing is that NECA has somehow turned Dutch into Batman, but the real kicker is all the figures are well done, each calling out with some particular unique reason to buy that one. I ultimately chose Jungle Extraction over Patrol (the other two hadn’t been released yet) because I liked the jacket look better, there was an extra accessory, and, yeah, the cigar. Any good Arnold figure ought to have a cigar. 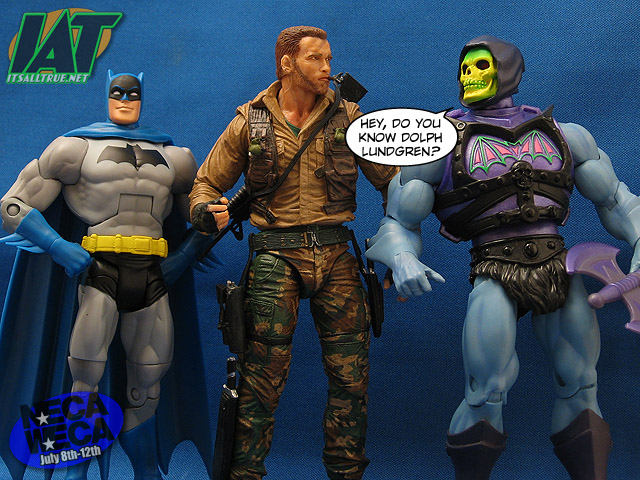 Now, I don’t want to oversell this figure. I typically buy comic or cartoon-based figures so I tend to lean towards toys that look like toys instead of little people. But Dutch doesn’t really scream toy at all. The sculpt is top notch. The pants and jacket look fantastic with all the seams, pleats, and other little details you need. But I have had figures like that before. Stargate jumps to mind.

What really sets Dutch apart is the head sculpt, which I’m going to describe as a “Hot Toys Level” head sculpt on a seven-inch figure. The whole sculpt is pretty impressive, but the head is what really knocks the figure out of the park. Take a look at this comparison shot with a Terminator figure from just a few years ago. 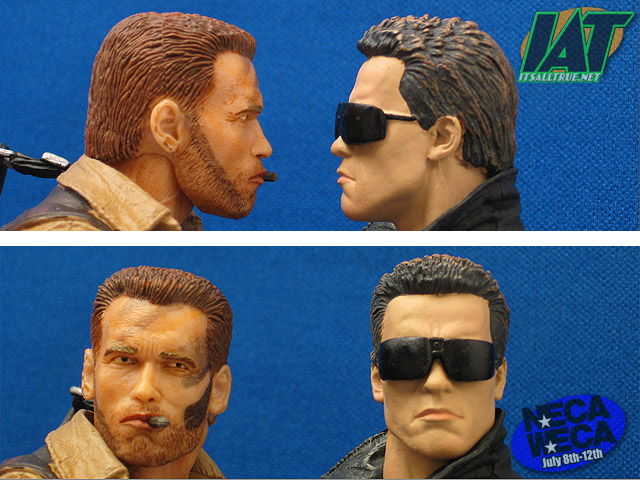 You know what that picture says? That it’s time for a new Terminator figure. In just about any other setting, I would call that Terminator head sculpt good. The likeness is there. It looks sharp. But next to Dutch, it just doesn’t hold up.

While NECA has captured a well detailed, realistic likeness, the figure also has a great sculpted expression. Normally, I prefer my figures to be a little more neutral (I hate screaming heads with a passion) and I definitely am not a fan when eyes are painted to not look forward, but this figure has made me rethink that. The sculpted expression is fantastic and captures that squinty-eye sideways glance that Arnold uses in just about every movie. The other great thing is that, with different poses and lighting, you can get a few different moods out of it. I haven’t had that much fun posing a figure in pictures for a long while. 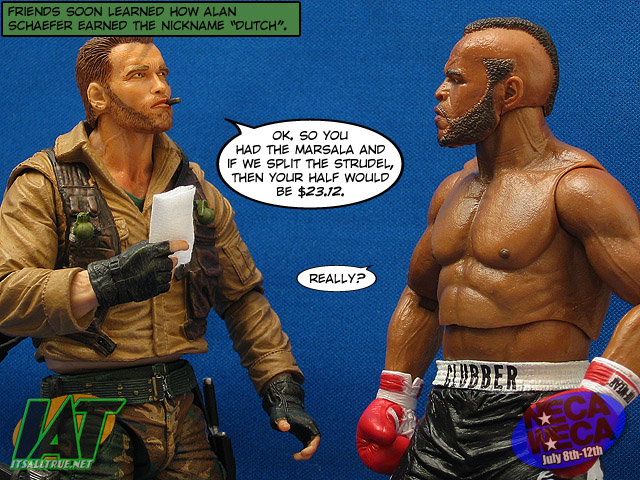 Now, we’ve had great sculpted figures before and often enough they tend to lose some value when it comes to articulation. Even NECA’s older Terminator figures can be maddening. The T-800 in the pics here has great articulation above the waist, but virtually nothing in that statuesque lower half. I’m happy to report that isn’t the case with Dutch. His articulation pretty much seals his contender status for “Figure of the Year”. Dutch features ball-joints at the neck, shoulders, elbows, wrists, hips, knees, and ankles, a ball-jointed torso, and swivels at the waist and thighs.

NECA has borrowed some of the more modern articulation we’ve seen lately by using the ankles joints where the pegs go down into the foot to dramatically increase the range. They’ve also used MOTUC-style hips where the swivel thigh is inside the leg and a soft covering for the lower torso hides the interior ball-joint. All the joints have great range even with the sculpt doing its best job at hiding the articulation (the knees do so particularly well). I’m still going to be greedy and wish there was a bicep swivel because ball-elbows just aren’t the same, but it’s a minor complaint. Dutch is capable of some fantastic poses and the sculpt makes sure he looks great in just about all of them. Continue to Page 2…