After 20 straight hours in a car, I proceeded directly to work and apparently missed all sorts of hullaballo as Mattycollector unleashed their latest figure on an unsuspecting populace. Yes, it’s a random day in May and your MOTUC collection is one less figure from being complete!

I’m not exactly sure what happened today, going straight from a long car ride to work an 8-hour shift messes with your mind, but at some point this afternoon Mattycollector dropped a surprise figure on their site, Spirit of Hordak. If you were lucky enough to be in front of a computer this afteroon you were treated to a special link and this message:

Congratulations! By magic or by luck, you’ve found a secret figure! Now you see him… but this master of manipulation can disappear at any moment so act quickly!

This all-clear figure features painted red eyes, chest emblem and removable armband, and comes with a fan-demanded Hordak® cross bow in vintage white. Trust us, this visitor from the dark dimension is up to no good… but you’ll have to get the figure to see his complete bio. Straight from the 2013 mini-comic, “The Secret Origin of Skeletor,” this highly collectable figure is not available with Club Eternia® subscriptions or even during regular monthly sales, so make sure you check back often to try to catch him the next time he decides to project onto this page!

Please Note: This item is on its way to our warehouse! The expected availability is 5/10/13; items ordered at the same time will be held until this one arrives. 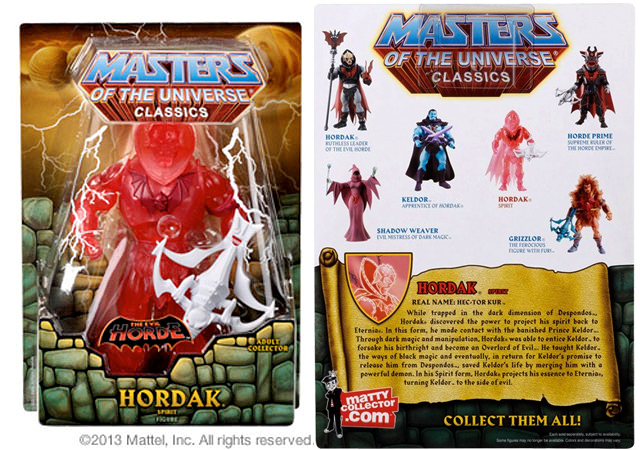 While we’re in the interim waiting for Hordak to “reappear” this message has since been replaced with the simple tease “You’re too late. Hordak is back in hiding.” If you search for Hordak at Mattycollector, the Spirit will come up in the general search and shows that he is currently listed as sold out though the tease would indicate we can expect to see him again… sometime. I’ll probably be at work. 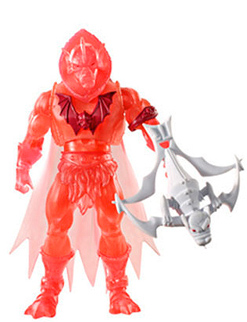 As one would expect, the internet promptly broke in half after the news spread. Honestly, this is one of those times where even the angriest among us probably needs to take a step back and realize they’re way too upset about this – even if it isn’t the brightest thing Mattel has ever done. I mean, it’s one thing to unleash a string of curse words at some guy who just cut you off on the road when you’re in the car by yourself and he’s making you ten seconds later to work, but it’s entirely different to spew all that out in a public forum, right? Road Rage is one thing, but Nerd Rage? Right? Yeah, I know.

Here’s the thing. While I do feel that same sting of wanting to buy something and being unable to for no particular reason, I don’t think there’s a call for nerd rage just yet. This isn’t the Spirt of Grayskull where a handful were run in different colors as part of a larger batch. There is no regular Hordak reissue, and as far as we know, no other version of Hordak currently coming. So, this is presumably a full-fledged figure release and logistics dictate they had to produce enough to make it profitable. Yes, big runs can sell out in minutes, but I don’t think this Hordak was that viral. Quick Sell-outs on MattyCollector are usually because of that site’s one sole advantage over it’s competitors, they release toys at a specific date & time, by appointment. And though, Mattel has willfully (& some may say foolishly) given up that advantage with this promotion, I still think there will be plenty of Spirit of Hordak’s in our future. 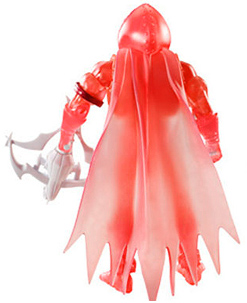 That said, I feel like we should all caution Mattel from going too crazy with these “surprise” figures. MOTU is a great, but unique, toy line. A large part of its current success, as Mattel themselves explain to us, is due to subscription sales. And, in turn, that subscription is sold on the basis of getting everything with ease. Now, long-time collectors know that Mattel has never embraced that concept as fully as we wish they would have, having us jump online to grab stands, vehicles, SDCC exclusives, etc. But, again, those were sold by appointment.

That all changed today. If it turns out that I’m wrong and Spirit of Hordak will somehow be a difficult to get, ultra-limited figure, then a lot of subscribers are going to miss out. And no matter how much you love MOTU, when you miss one (or more if Mattel embraces this “surprise” figure rollout), then subscribing becomes incredibly less important. When you’re missing figures you wanted, buying the ones you didn’t really want becomes questionable, buying them all becomes near impossible, and buying the subscription loses its luster.

But I think Mattel knows that. So right now I’m just going to be excited that Mattel got a figure to market that I didn’t know about. Those kind of surprises are few & far between anymore and it’s pretty cool. Yes, it would be even better if I had had the chance to lock one up, but hope springs eternal – even when it comes to a denizen of Despondos.