There was plenty of MOTU news this last week and not much of it made it to the front page here at IAT. Granamyr’s packaging and bio were revealed (along with the news that he’ll be delayed), the “apology gift” for Frosta was sorta revealed, and a new 3rd party add-on kit for Castle Grayskull Man is a must have.

It was confirmed last week that Granamyr will not be delivered to Mattycollector in time for next week’s sale. Despite the “slight” delay, Mattycollector will still have him available to order on December 17th. What that means for each of you is that any order containing a Granamyr will not ship until he’s ready to go out. If you want your regular Dec figures sooner, you might consider ordering the big grumpy dragon separately. To assuage our concerns that Granamyr will not be arriving in time, Mattel has provided the packaging images for Granamyr (with amazing Rudy Obrero art) along with his bio: 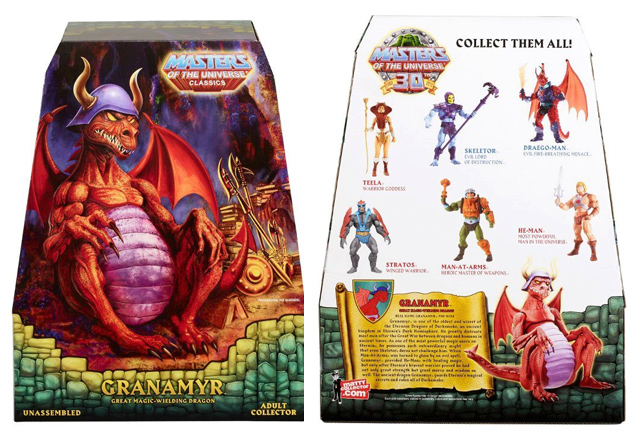 Granamyr – Great Magical-Wielding Dragon, Real Name: Granamyr the Wise
Granamyr is one of the oldest and wisest of the Eternian Dragons of Darksmoke, an ancient kingdom in Eternia’s Dark Hemisphere. He greatly distrusts most men after the Great Wars between dragons and humans in ancient times. As one of the most powerful magic users on Eternia, he possesses such extraordinary might that even Skeletor dares not challenge him. When Man-At-Arms was turned to glass by an evil spell, Granamyr provided He-Man with healing magic, but only after Eternia’s bravest warrior proved he had not only great strength but great mercy and wisdom as well. The ancient dragon Granamyr guards Eternia’s magical secrets and rules all of Darksmoke.

In other Matty news, subscribers received an e-mail last week that Mattel had decided on a course of action for the “apology item” they had announced as a response to Frosta’s reversed forearms:

As the year comes to a close, we wanted to say “thank you” for being a loyal Club Eternia® subscriber in 2012. It’s been a great year with incredible highs (Fisto™, Rattlor™ – two vintage figures that surpassed even our expectations) the occasional minor misstep (Frosta’s gloves), and more incredible highs (Griffin, a 200X beast, and Shadow Weaver – our first Filmation figure!).

So, to make sure you know how much we value your business and as promised at Power Con in noting the issue with Frosta’s gloves, we’re sending you a FREE gift… a basic Masters of the Universe® Classics figure will be included with your December subscription shipment! You won’t know which one you’re getting until it arrives and because it’s our gift to you, shipping for this freebie figure is 100% paid by Mattel. While we originally thought this gift might not come until late next year, we wanted to end 2012 with a bang and make sure you get your free gift before the year is up!

Looking ahead, 2013 promises to be even more powerful! We’ll start out the year with Ram Man® and Netossa™, then get ready for the arrival of the first Castle Grayskull® playset in 30 years.

Again, thank you for being a part of our MOTUC family. We wish you and yours the happiest of holidays!

Reaction was mixed, but largely positive to the announcement. While I’m happy that Mattel is doing something in response to the Frosta QC, I can’t say I’m personally thrilled with the decision. Early word from Toy Guru seemed to indicate that they’d be doing something new & unique (a new deco on an old accessory, perhaps?) and those initial Toy Guru comments raised my expectations well beyond that of a receiving duplicate figure.

Still, one could say that an entire free figure soundly trumps an accessory, and I will happily sell or donate the doubled-up figure and still come out ahead. This is absolutely true, but I should point out that I’m buying an entire MOTU DVD set (affiliate link) to get a gold power sword. So I like me some redecoed accessories.

Finally, in our MOTU-news-not-from-Mattel segment, the always amazing Joe Amaro has a new third-party item for your MOTU Classics collection. Designed in collaboration with the talented Daniel Benedict, this $30 add-on kit will include a new skull head, helmet, & display stand that all look exceptional when paired with the figure: 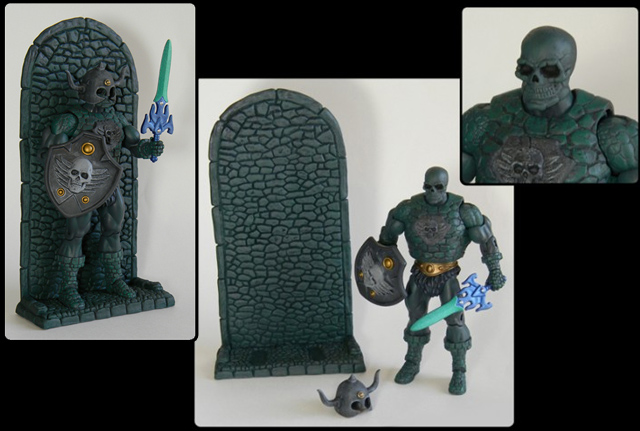 The set goes on a sale at Wednesday Dec. 12th at 9PM (Eastern Standard Time). I’m hoping to snag one myself even though I’ll be at work (that and my track record on Amaro items is lousy, I’m 0-for-2), but best of luck to each of you that wants one!