Skip to content
Cast in the Name of God: Ye Awesome.

My name is AdventureVault. I perform a much needed job here at It’sAllTrue.Net.
(I give the noisy devil a day off now and again)

What do you get when you cross Batman the Animated Series with a giant Japanese mech? You get the greatest anime of all time, The Big-O. I love everything about that show. I love the complex and subtle characters, the multiple layers and undertones, the mellow noir feel, the city shattering (literally) giant robot fights, the emotionally compelling music, and I love the ambiguity. I could sit and talk about the nuances of this show for hours if my friends would tolerate it. I am obsessed, and with obsession comes a compulsion to collect any and everything Big O related. When I heard the news that Soul of Chogokin was making a figure of Big-O, I was already sold. 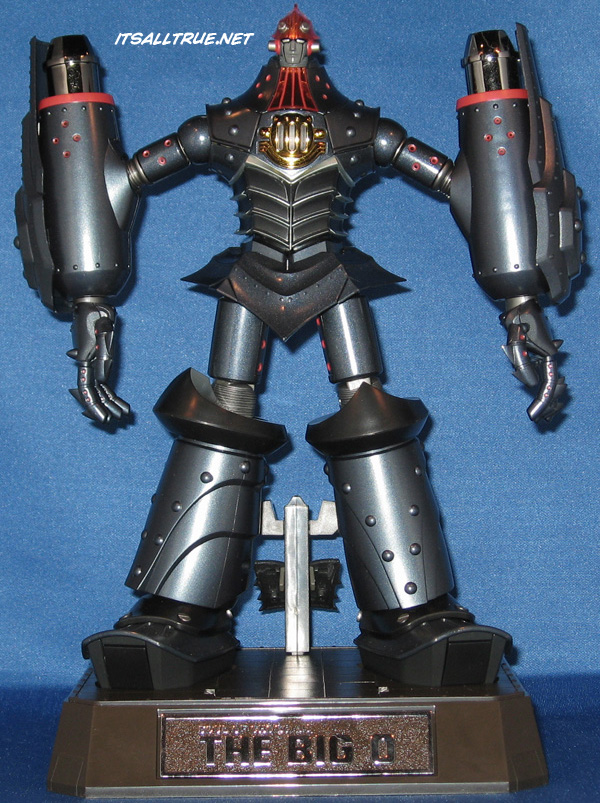 Soul of Chogokin, “Soul of Super-Alloy”, is a line of toys made by Bandai that consists of various robots and mechas from a multitude of Japanese animes (check out this Wikipedia link to see if your favorite’s been made yet). The line is known for its incredible detail and the interesting feature of mixing plastic and metal parts.

Like all giant Japanese mechas, Big-O has a pilot. Roger Smith is the Negotiator of Paradigm City, a dystopian future where the elite live inside protected domes and everyone else tries to eke out a living in the shambles of what’s left of the old city. The show has a heavy noir feel, and Roger is usually called upon to “negotiate” an end to various problems from kidnappings to finding out why the city’s power has been failing. When these negotiations go awry, and a giant robot or maybe a rogue Christmas tree begins to wreak havoc, Roger calls on his trusty Megadeus, Big-O. 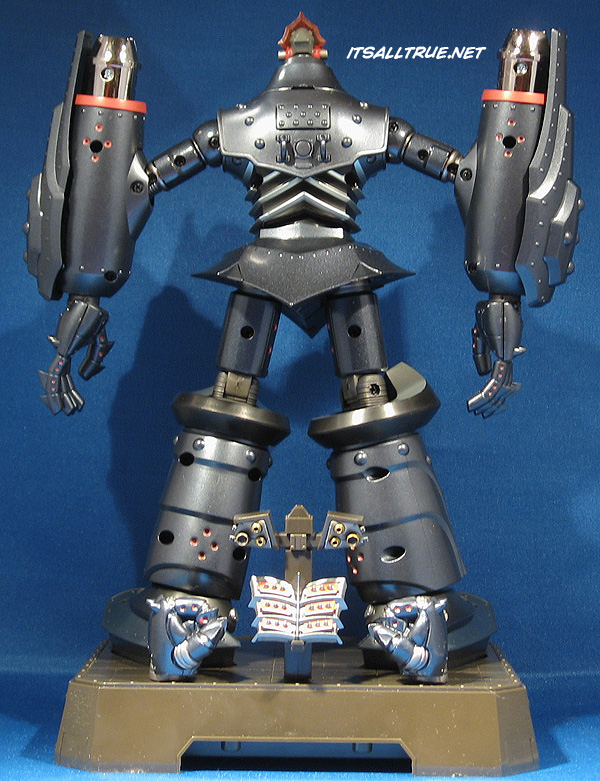 The first thing I want to mention about Big-O is that he is heavy. His body, upper arms, upper legs, and feet are all made of metal. There is also a metallic suspension system under his lower leg which attaches to his feet. This allows his feet to lower slightly when lifted off the ground, similar to what happens in the show. Another impressive detail that is noticeable right away is the grill on his chest is vac-metalized gold, and his arm pistons are vac-metalized silver. The rest of his pieces are plastic, but they were created with the same dark metallic look of the metal parts which allows them to blend seamlessly together. While I’m on the subject of paint, let me just say, there is absolutely no slop or mispaints of any kind. From his silver bolts, to his tiny filled in red circles, to the tiny red circles that are just rings, to his eyes and the black lines running down his face, there is no blemish on any of the paint. 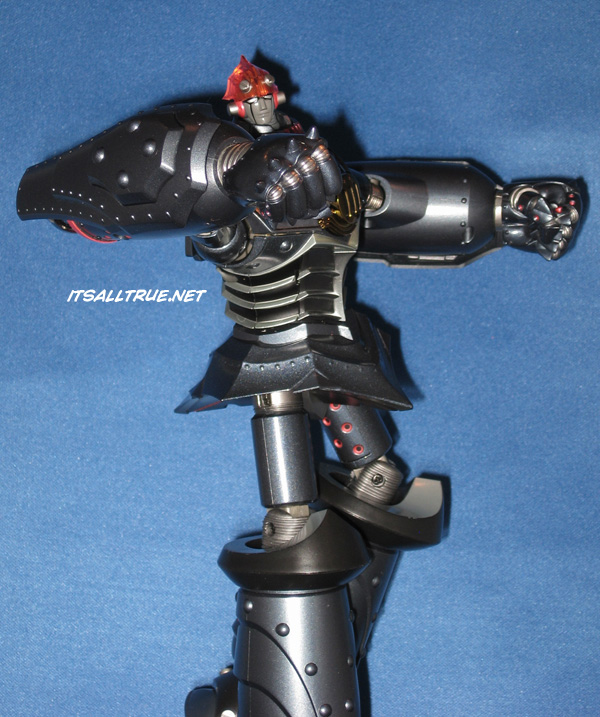 When the producers of the show created Big-O, they wanted his movements to be similar to that of a man in a giant robot suit. That’s why his design is somewhat limiting. Even though this figure follows that design to the letter, this is still probably one of the most articulated figures I have ever owned. His head is on a swivel/hinge which allows him to look in any direction a human can, and not look unnatural. His shoulders are ball joints which have segmented sides, allowing the joint to easily lock in place and remain there. This is a great thing for those heavy metal parts that would pull any normal joint down over time. He has a swivel bicep joint. His elbows are hinged. He comes with two sets of hands. The fist hands are a swivel wrist joint. The open hands have a hinged wrist joint and each of the fingers and thumbs have hinge joints. Big O’s waist has a swivel joint, but it moves only slightly. His hips are ball joints and allow him to move his leg to the side. Again there is an internal system that allows it to lock in place. He has a swivel cut just above the knee and hinged knee joints. The metal bars under his leg armor join to a ball joint on the foot, allowing for some really decent movement and stability.

His sculpt is perfect, even down to the smallest detail. He looks kind of plain up front, but all those details were packed in with what I consider “action features”. The clear plastic of his helmet was also used on his chest piece. This is the “window” from the cockpit. The entire upper chest can be raised up to reveal the cockpit where Roger sits. Just below that, the entire chest can be lifted up to reveal his shoulder cannons. The armor over his abs can be replaced with a piece that shows off the open missile bays. 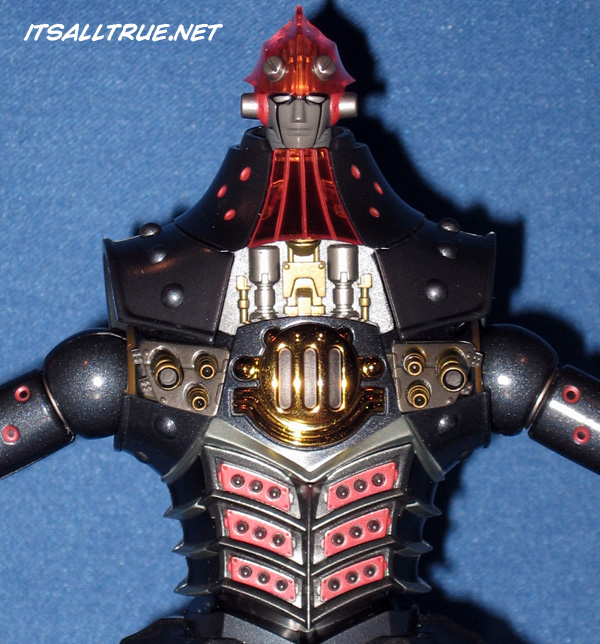 The front of his feet can open up to reveal the “garage” where Roger’s car can sit. Best, but not least, Big-O’s arm pistons can be pulled back and locked into place for the “Sudden Impact” attack. In this position, the pistons release when the fist is pushed in, recreating the attack in the exact way it is seen on the show. In fact, all of those details are exact to the show, and make the figure even more special. 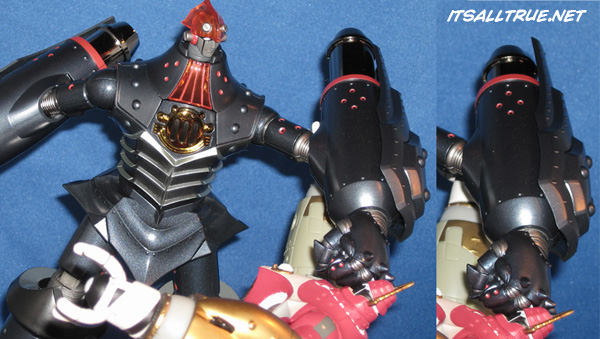 Big-O doesn’t really come with accessories as much as extra or alternate parts. Two sets of hands, two guns for under his shoulders, his extra ab piece with the missiles, all of these can be displayed on his base. I don’t consider it a stand because it doesn’t hold him up in any way. There are simply two spots in the shape of his feet where he stands, behind him you can store and display the extra pieces. As an interesting little piece of eye candy, the words “Cast in the name of God, Ye not guilty” are molded into the base. Another non-accessory that he comes with is a little booklet which talks, in Japanese, about the show and the creation of this figure. It has some schematics of the figures design and the cover is the first original sanctioned piece of art for Big-O in at least five years. A nice little bonus, in my opinion.

Now, all this awesome doesn’t come without its price. If you are looking to pick yourself up Big-O, or any Soul of Chogokin, it’s going to cost you. Every figure is different, but don’t expect to find Big-O for less than a hundred twenty dollars, and that’s not including shipping. Is he worth that much? In my opinion, yes. Of course I would like him to be cheaper, but he is an extremely detailed, articulated, action featured, and limited figure. And, I love the series he’s from, so I can justify to myself the price. If you want the ultimate Big O figure, then you will be happy with him. If you’re just looking for some cheap robots, then you should probably not pick the Chogokin line. 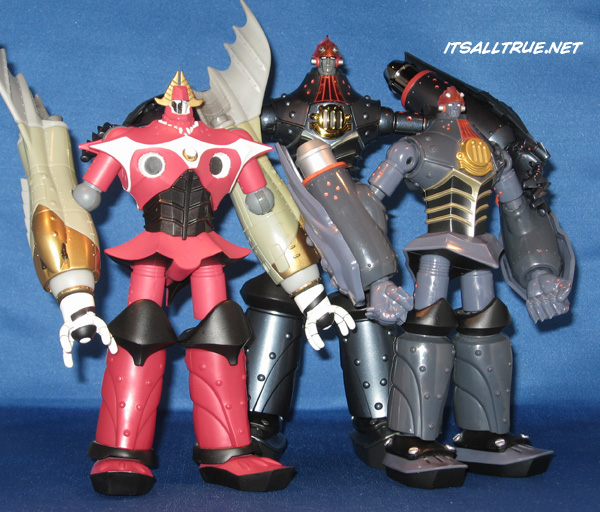 As a side note: After buying this figure, I discovered there is going to be a special limited release of a bonus set by the Soul of Chogokin line. This set will include two extra heads, an arm canon, all four hip anchors with chains, various bursts of energy that can be attached to look like he is shooting, and the Gryphon (Roger’s car). This set is only available from the company in Japan, but you can probably find it on some websites if you look hard enough. The set will be released in December and, if you are planning on importing it, will probably run you near to one hundred dollars, not including shipping. I will be getting this set, so expect the review here hopefully before Christmas. 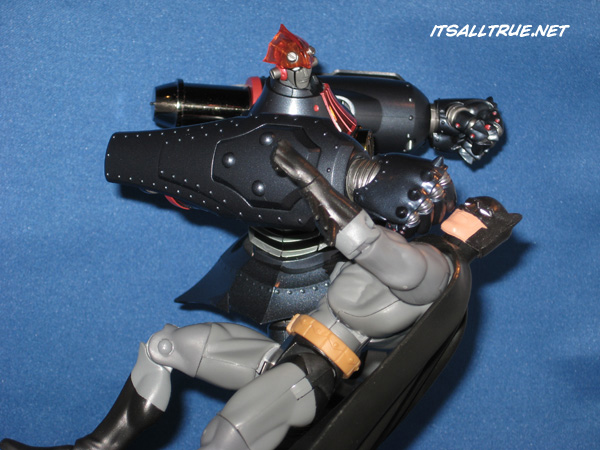