As some of you may have heard, Castle Grayskull Week went a little askew after I found myself in the middle of a five-car pile-up on Wednesday. I’m doing just fine, but the site kinda trailed off last week. My bad. So Grayskull Week gets one more day and it’s kind of an important one.

Before I dive in, just a quick shout out & thank you to all the well wishes I received here, via e-mail, on Facebook, and on Twitter! They were all greatly appreciated. I just run a silly toy blog, but you guys rock my world. Thank you!

So, today’s kind of an important day for MOTU Classics. Not to get too overdramatic here, but, barring an extension, it’s either the day that Classics gets an iconic (& once-thought-impossible) playset to cement itself in the annals of awesome toylines… or it’s the day where all that hope & excitement takes a swift kick to the balls. The line will go on, presumably for awhile, but not getting the Castle would really hurt. 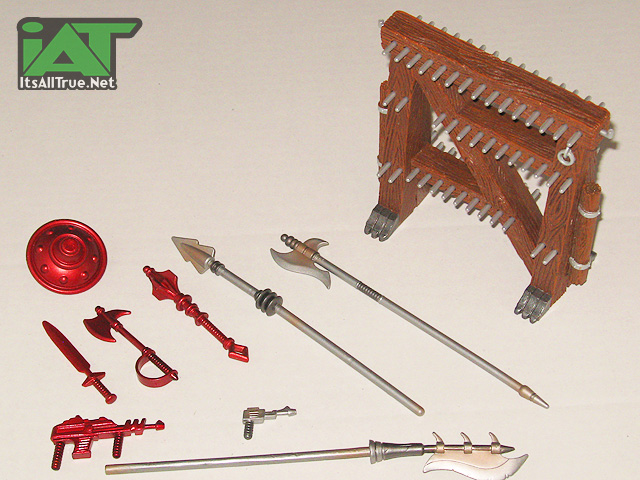 Going into the weekend, the thermometer was at about 81-82%. Ideally, we’ll get an update on the thermometer early today. If we’re lucky, the weekend sales have already done the hard work or at least most of it and today won’t be too stressful going into the closing hours. With no charges being made to the credit card used to pre-order, I don’t know why folks would wait until the last minute, but we’re a weird lot. I’m hoping for that weird lot to come through. 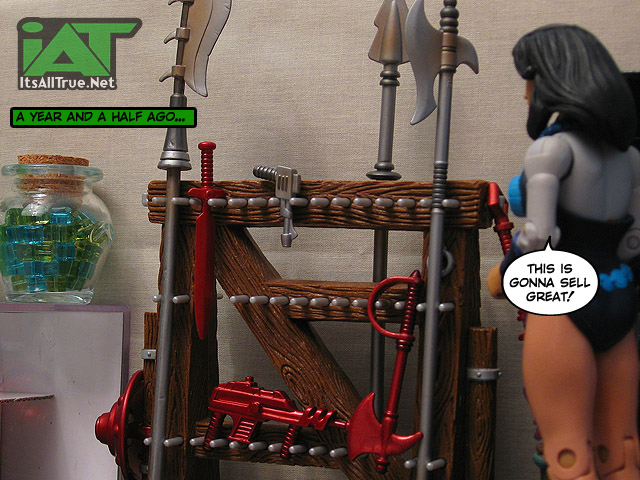 So, I’m already past the second picture and I’m not even talking about the subject of the review. Great! If you’ve looked over the proposed Castle’s blueprints, you would’ve noticed that a very important piece of the original toy was missing: the Weapons Rack. If you’ve followed the line, you also know why. We done already got it way back in April 2011.

For whatever reason, I never got around to the Weapons Rack review back then (and not a week goes by that I don’t get an e-mail about it. Or the first He-Man for that matter, I’ve never reviewed him either), but with the looming possibility of a Castle to put this Weapons Rack in, I thought today would be a good day. 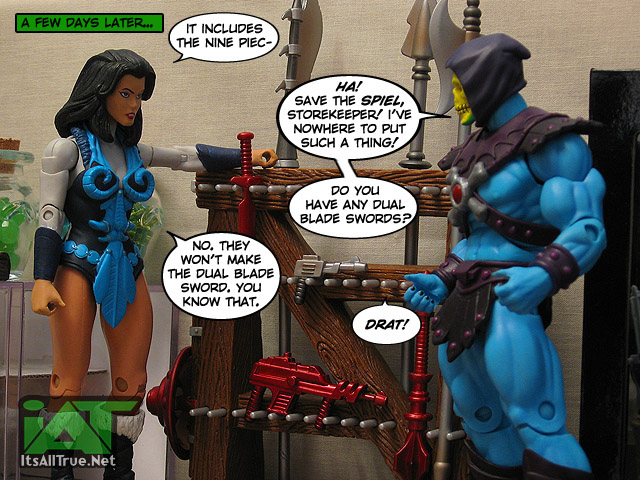 The Weapons Rack more or less served as the 2011 Weapons Pak. It included an all-new sculpted stand and nine repainted weapons. The stand itself is a great sculpt and can actually hold quite a bit more than the set included, but I’ve honestly never gotten much use out of it. It does look great hanging out with the figures as a diorama piece and I have used it in the review backdrops a time or two, but it really needed to be nestled in its home in the Castle. I’m honestly much more excited about this piece now that the Castle is very close to becoming a reality. Continue to Page 2…